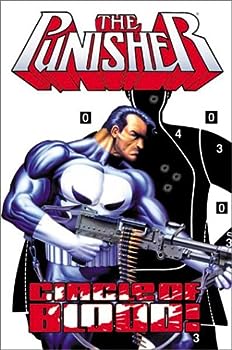 This description may be from another edition of this product. The Punisher's in prison, but he can't complain - now the criminals have nowhere to run But, while he's in gray, his trademark black-and-white look is being used by an army out to wipe out the mob and...

Published by Thriftbooks.com User , 12 years ago
A lot of PUNISHER material is out there and much of it is decent, but none holds a candle to what is the ultimate, definitive PUNISHER story. Steven Grant and Mike Zeck really hit this one right out of the ball park and even today it stands up against the very best comic book creations. Zeck was at hi best here, bringing Grant's wonderfully well written script to life. Despite the Comic Book Cose limitations of the 80's, this is an adult story, one with depth and feeling and it actually works better without the F bombs used by modern day writers, such as Garth Ennis. Grant has much more to offer then foul language and graphic violence. Instead he has mood, tension and substance. While I think this deserves the oversized Hardcover treatment, I understand that its five issue limit likely means that won't happen, so this is the best way to enjoy the series, again and again.

The name says it all!

Published by Thriftbooks.com User , 13 years ago
I recently read this hardcover collection of that great mini-series that catapulted The Punisher to comics superstardom. His vigilante approach to solving crime is efficient but not without consequences. While battling his own inner demons, Frank Castle wrestles with the toll his actions take on the innocents who sometimes get caught in the middle. Unlike so many other heroes, The Punisher doesn't have superpowers to rely on. He only has his military training and his conscience to guide him. Mike Zeck's incredible work is nicely collected in this hardcover.

Published by Thriftbooks.com User , 17 years ago
This is a great reprint of the first Punisher mini-series. Fair warning though, this mini-series is also included in the Essential Punisher collection (albeit in black and white), which is cheaper and has a lot more stories in it. If color doesn't matter to you, then you might want to go that route.

one of the best comic miniseries

Published by Thriftbooks.com User , 19 years ago
In the 1980's marvel refused to make a miniseries on the punisher (who first appeared in amazing spiderman) because he was too violent and often killed the bad guys. When artist mike zeck threatened to leave marvel however marvel decided to allow the miniseries to be made. In the first 3 hours the first comic was in newstands, it completely sold out. It was an instant hit. Marvel suddenly decided to embrase the punisher as a character. soon the punisher gets his own long term series called "the punisher" the "punisher war journal" and countless others as well as a movie called the punisher. This miniseries was in my opinion the most influential comic that came from the 80's. This graphic novel is very well written and clever. If you give it a chance you'd like it

The Count Of Monte Cristo Of Comic Books

Published by Thriftbooks.com User , 20 years ago
I've been a fan of this particular Punisher series since I bought the second issue of it when I was 7 years old. I can still remember seeing Frank on the cover with his machine gun and thinking to myself, "Whoah he looks just like Rambo!". Now, all of these years later, I consider this work to be the single finest Marvel mini-series; yes, even better than anything involving Wolverine, X-Men, or my beloved Spider-Man. Circle of Blood is a complete story within itself, and would be the perfect comic to turn into a movie. The artwork is fantastic, and the dialogue is less cheesy than you normally find in 80's comics. There are none of the annoying references to every other comic book in the Marvel Universe (I was one of those kids that really hated that), and there are -- thankfully -- no appearances by other Marvel characters. These factors, combined with the story's grittiness and adult nature, make it one of the more original and realistic of anything Marvel's done. Frank's enemies in this book are not flamboyant villains, but just the kind of thugs you would expect in a mob movie. Frank's not out to save the world, but to get revenge upon and eliminate those who caused him so much grief. Oh, and did I mention? Frank isn't afraid to kill. The story follows Frank from his family's murder, through prison, war with the mob, and ultimately to one of the most satisfying endings you could possibly imagine finding in a Marvel mini-series. I must stress again how delightful it is to be able to read this story over and over and not be made to feel like a goof because you missed a particular issue of this or that comic, or to have the entire credibility of a scene shot down by an appearance of a wise-cracking super-hero in tights. Not that there is anything wrong with wise-cracking super-heroes in tights, but you get my point. Apparently this graphic novel has (...) been re-issued. I'll be ordering it immediately. I lost my copy years ago and I long to read it again.
Copyright © 2020 Thriftbooks.com Terms of Use | Privacy Policy | Do Not Sell My Personal Information | Accessibility Statement
ThriftBooks® and the ThriftBooks® logo are registered trademarks of Thrift Books Global, LLC