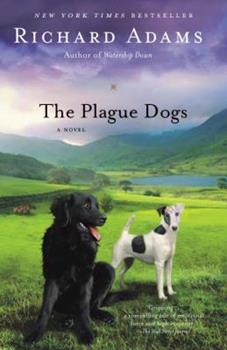 The Plague Dogs: A Novel

"Thousands and thousands of people will love this book " THE BOSTON GLOBE A lyrical, engrossing tale, by the author of WATERSHIP DOWN, Richard Adams creates a lyrical and engrossing tale, a remarkable journey into the hearts and minds of two canine heroes, Snitter and Rowf, fugitives from the horrors of an animal research center who escape into the isolation--and terror--of the wilderness.

Published by Fooled Me Once , 3 years ago
Watch out! If you order hard cover copy it will be missing dust jacket!!!!!

Published by Thriftbooks.com User , 18 years ago
I didn't like this book at first. I put it down after about 70 pages and couldn't read anymore, and gave it two stars on my personal list. Nothing against the book. I just couldn't understand it. I'm an American, and the dialect the dogs were talking was really hard to understand- and I hadn't even gotten to the fox speaking Geordi. And one of the dogs was insane! It was too difficult to follow along as to what was going on. A year later I picked it up again, and decided to give it another go, and plow through. Glad am I I did. Yes, the dialect is hard for Americans, especially the Geordi, which is the hardest English dialect for Americans to understand. And this edition is even dumbed down for Americans! But it's worth it to get through it. This was an amazing story, and once into it, I was enthralled. Adams paints beautiful images with his words, where you see clearly the Lake Country, though never having been there. Slowly you start to really care about the dogs, and experience life through their eyes. One wonders if perhaps Adams spent some time as a dog previously, after being a rabbit, for he writes so realistically from the canine perspective. This book is not for the squeamish. The atrocities of animal experimentation are vividly described, as are a number of deaths, and worse. There were a number of times when I was shocked at the turn of the story, and realized that now this story was quite different from what I had up till then read. But this too, is part of the story- "It's a hard life for an animal." There's definitely a message here. A few of them actually: the attitude of the press; the treatment of dogs by humanity; and the treatment of humans by each other. For Adams also writes very convincing human characters. These are the true inner-workings of the human mind. His style is somewhat breezy, Dear-Readerish, but not off-putting or pretentious. Rather, Adams creates an atmosphere where we feel comfortable to be in dialogue with him, at the same time eager to read the life of the dogs.

I marked this book with post-it's

Published by Thriftbooks.com User , 19 years ago
"Some say deep sleep is dreamless and that we dream only in the moments before awakening, experiencing during seconds the imagined occurances of minutes or hours. Others have surmised that dreaming is continuous as long as we are asleep, just as sensation and experience must needs continue while we are awake; but that we recall--when we recall at all--only those margins and fragments which concluded the whole range of our imagination during sleep; as though one who at night was able to walk alive through the depths of the sea, upon his return could only remember only those light-filtering, green-lit slopes up which he had clambered back at last to the sands of morning." This is just a touch of the poetic writing that Richard Adams uses to convey this beautiful story of two dogs. It is also a story about society. This is not an easy read. The reasons that this book was more difficult for me was because of the dialect that one of the dogs spoke with and also the British terms (new to me i.e. Lorry =vehicle, dust bins =trash bins), and the text is so rich it takes a slower read to digest it. I had to look up a few words, so reading this book expanded my vocabulary. Although the reading was slower, it was worth it. Very worth it. Once I was 1/2 way through I was thanking myself for keeping on, it was paying off. And by the end - I was very into it. I have never read such a unique writing style. There is no way to describe it but to say it is art. I poured over the book with post-its marking the ingenious philosophical ideas that I'd loike to come back to to think about and discover my feelings about. This was my third Richard Adam's novel and I am always amazed. I plan to read all of his books. Great read. Highly recommended. Thought provoking.

Published by Thriftbooks.com User , 21 years ago
"The Plague Dogs" isn't nearly as accessible as "Watership Down" & it's not a children's book. Don't start reading Adams with this book--start with "Watership Down." ... Some of the dialect (especially that of the Tod) will be very difficult for American readers (though it was slightly toned down for American editions) & it's perhaps hard to follow if you've never heard the real thing, but even it is brilliant. I have heard the real thing & Adams captures it perfectly. It works best if you read it quickly. ... Adams does some wonderful experimentation with the writing in the book, experimentation that draws on a vast literary heritage & demonstrates very wide reading, experimentation that is itself a tribute to his literary forefathers. ... The characters, especially the canine ones, are very well-drawn (I'm tempted to call my next dog Rowf). ... Good plot twists, evocative geographical description, a singularly haunting passage about a ghost, great description of snow. ... The animal experimentation theme is very well done, not overstated (all of the experiments Adams described were real) & while it's obvious where Adams stands, he has the guts to balance the debate with an unexpected portrait of a dying child. ... The true brilliance of this book lies in the ending, which is just an absolute work of art, drawing together narrative strings, switching narrative styles, switching points of view, speeding up & slowing down ( & even incorporating the author's tribute to his own friends without becoming excessively idiosyncratic) until it becomes positively lyrical. The book is worth it for the ending alone ... & Adams is a master of making the incredible credible so we willingly suspend disbelief ... maybe because Rowf & Snitter are so well portrayed we sorely want them to live. Not an easy read, but SO good.

Richard Adams is one of the great writers of this generation

Published by Thriftbooks.com User , 23 years ago
I read "The Plague Dogs" after I'd read "Watership Down," which is also written by Richard Adams. And while perhaps "The Plague Dogs" is a bit more difficult of a read than "Watership Down," and may lack the narrative flow of his first book, it is a tremendous novel, nonetheless. His central characters, two fugitive dogs from a testing laboratory named Rowf and Snitter, are distinctly drawn and reminiscent of some of the great tragic characters in English Literature. Their flight from captivity will draw you in from the moment they escape the laboratory, and will continue to hold you breathless as they ellude their captors and seek a new master. The novel works on two levels: both as a commentary on the mistreatment and abuse of animals in laboratories, as well as a look at humans from an animal's point of view. Be warned, however, you may not like what you see. On a negative note, the author often slips into a confusing slang, common to the area in which the novel takes place, when creating dialogue for certain characters like the lab workers and the Tod. At times, the lingo can become tedious and the reader may be tempted to skim over it. Also, the background information leading up to the introduction of Digby Driver midway through the novel can seem unnecessary; however, skipping over these aforementioned parts only denies the reader essential information and dilutes the novel from the author's translucent vision. With that said, Mr. Adams is at his lyrical best when the story focuses on the dogs and away from their human counterparts. Mr. Adams's ability to write from an animal's perspective remains unchallenged in fiction today. Not only is Mr. Adams a gifted storty-teller, but his mastery of the English language is hypnotic. "The Plague Dogs" and "Watership Down" are two masterpieces of modern literature that will haunt the reader long after the final page has been read. On my best day I aspire to be as human as a character in a Richard Adams novel.

Published by Thriftbooks.com User , 23 years ago
From the author of "Watership Down", this book is a hidden literary treasure -- a work of absolute genius.The main complaint of this book -- that the intense and often wordy descriptions make it unreadable -- is valid, but ultimately insignificant. Victor Hugo, author of such classics as "Les Miserables" and "The Hunchback of Notre Dame" is the master of extraneous description, and makes Adams look positively concise. Get past the first forty pages or so, and you may actually enjoy the peaceful reflections as a break from the challenging work as a whole. Trust me. You'll be glad you persevered.For "The Plague Dogs" is no ordinary novel. Wrapped in its relatively simple premise of two dogs escaping from a cruel research facility is an extraordinary study and breakdown of everything that is wrong with Human society. Adams exposes the darkest machinations of the media and the social orders, revealing the manipulative strings attached to every facet of Human life and how they are pulled. We are witness to how sensasionalism and perception reshape mass reality, and how innocent lives and souls become swallowed by the bloated machine we have created to act as our ruling bodies, and the motivations behind these acts. This is an unbelievably perceptive, enlightening creation.As a balance, Adams details the proper nature of things, and the harmony of nature. And what truly impressed me was the time he spend analyzing all sides of the issues he explores, remaining unbiased or fanatical.Add suspense, adventure, humor, bitter irony, GREAT characters... And the ending ... you'll be afraid to breath for several chapters; the suspense is so intense. The brilliant resolution makes no compromises. You'll be sweating by the time it's all over.In short, this book is Adams' masterpiece. Read it ... truly READ it, and you will grow from the experience into a more enlightened person.
Trustpilot
Copyright © 2022 Thriftbooks.com Terms of Use | Privacy Policy | Do Not Sell or Share My Personal Information | Accessibility Statement
ThriftBooks® and the ThriftBooks® logo are registered trademarks of Thrift Books Global, LLC