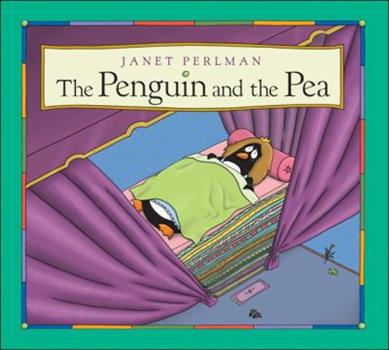 The Penguin and the Pea

Sad and lonely, the Penguin Prince longs to find the perfect penguin princess to be his wife. Then one stormy night, a wet and bedraggled penguin arrives at the castle claiming to be a princess. The prince falls deeply in love with the beautiful and mysterious stranger. But is she really a princess? In this sparkling and whimsical retelling of The Princess and the Pea, there's only one sure way to find out.

Published by Thriftbooks.com User , 18 years ago
Penguins are Janet Perlman's favorite animals. She has previously reinterpreted two other fairy tales with penguins, "Cinderella Penguin, Or, the Little Glass Flipper" and "The Emperor Penguin's New Clothes." In her most recent book, she gives the classic "Princess on the Pea" a new penguin spin. While Perlman overall stays true to Hans Christian Andersen's tale, she adds some modern twists including an extra night in which the princess sleeps horribly on what mattress covering a cabbage. On the second night she gets the pea and excessive bedding to contend with. While the princess is uncomfortable and detects the pea, her excessive bruising comes from falling out of the high bed. Modern sensibilities will appreciate that in this version the prince falls in love with the princess while playing games, singing, and dancing, not necessarily because she is a true princess. While the penguins are somewhat awkward in the story, they help this version of the classic tale cross ethnic borders and provide whimsical touches to a familiar story.
Trustpilot
Copyright © 2022 Thriftbooks.com Terms of Use | Privacy Policy | Do Not Sell or Share My Personal Information | Accessibility Statement
ThriftBooks® and the ThriftBooks® logo are registered trademarks of Thrift Books Global, LLC