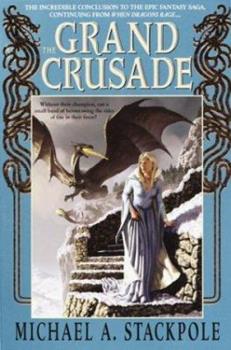 In this incredible conclusion to the epic fantasy saga, continuing from WHEN DRAGONS RAGE, New York Times bestselling author Michael A. Stackpole returns to a world of mystery, prophecy, and magic, where dreams- for better or worse- can come true... THE GRAND CRUSADE The hope of the future, Will Norrington, prophesied to bring down the northern tyrant Chytrine and redeem the world, is said to be dead, lost in the heart of a fiery volcano. The news...

Published by Thriftbooks.com User , 18 years ago
Wow, yet another powerful effort from Michael Stackpole. I have read every one of his books, and this easily stands at or near the top in terms of quality.The Dragoncrown war continues to rage, with all the devious machinations and backbiting and infighting that Stackpole is so adept at writing. Secret societies, clandestine meetings and political posturing contribute significantly to this book, as in the previous three in this world of Stackpole's creation. In the north, a gifted general, Adrogans, had won a great but surprisingly easy victory in the previous book. Now, some of the results of that swift conquest conspire to turn the assembled nobles of the many kingdoms against him due to fostered suspicion. In the south, the gifted young woman, Alexia, who from birth was trained to lead armies, is forced to confront experienced leaders in a concerted effort to drive the enemies from the southland. She is accompanied by a number of remarkable companions, including her lover, Tarrant Hawkins, a disgraced hero of old, are the champions united to lead the forces of the south. The young wizard, Kerrigan, who had been as much a liability as a boon comes into his own, facing and passing a number of challenges beyond the ken of any but him. The determined Vorquelf, Resolute, leads a separate band to the north to infiltrate the lair of the evil queen of the north and end her threat forever. Paramount among his goals is the redemption of his homeland, conquered and defaced by the queen and her minions for over a century.At no point in this book did the story seem to slow. Stackpole weaves romance, humor, action, and intrigue so well that I simply could not put down the book, and it was done before I realized it! There are many developments which were foreshadowed, though the manifestation of some events was unexpected. The characterization is excellent, with some characters being truly respectable, and others simply deserving hatred. Stackpole has really come into his own in the creation and development of his own world. You will not be disappointed in reading this book! Even the population of spelling and punctuation errors typically so rife in first editions these days is a vast improvement over other recent books.

A grand finale: Don't miss this!

Published by Thriftbooks.com User , 18 years ago
I think this is about the best Stackpole book I've yet read. And that's saying quite a lot.For starters, I didn't go back and reread any of the earlier books in the trilogy that this one concludes, so it had been about a year since I last visited the world and characters of the story, but this final book pulled me back into the story pretty well from the start. There were certain events from earlier in the series that were alluded to from time to time, in which I couldn't quite recall all the details of what had happened, but that didn't detract much at all from the new progress of the story in this book. Much more frequent were the events from the last book alluded to in this one, which came quite completely back to memory when they were mentioned, making my enjoyment of this book all the greater by drawing on remembered enjoyment of the previous one.The characters in this DragonCrown trilogy are wonderful, so many different types of people, so well developed, both the heroes and the villains. The plot is great too; the Norrington prophecy and all the developments from it, which drove a large part of the plot, had me making all sorts of guesses of what could happen, yet there were still surprises for me in how it all worked out. And it was a satisfying ending...actually more so the further I get from finishing it. Will's ultimate fate was kind of bittersweet, but maybe better than the various other guesses I'd been making. And as for the "Hawkins Secret" from the prequel, The Dark Glory War, well, it wasn't exactly what I was expecting, though similar, but was cool nonetheless, and it was worked into this final book of the series very well. Stackpole's writing style is wonderful to read, the storyline is engaging, the characters and themes were excellent, and overall, I'm very happy with the book and with the series that it concludes. I'd love to see more from the world of this story!

Published by Thriftbooks.com User , 18 years ago
I went through this book in less than 24 hours, which is faster than I went through the trilogy's second book, When Dragons Rage. This book was an excellent read -- I found it very hard to put down. I was connected so deeply with the characters in the whole trilogy, it was very important to me to find out what happens to them in the end, which was extraordinary. I would recommend this series to anyone who likes fantasy at all -- or anyone who has recently seen the Lord of the Rings films. The tale of adventure and love and loss and courage and dedication and loyalty and devotion is just so universal -- it is rare that you find a series that explores all of these things at once, in addition to larger issues. Destiny is at play here, and this book takes a good, hard look at what prophecy really may be, what destiny really might mean. Never have I read a book that deals with the concepts of destiny and prophecy better than this one. Additionally, woven into it all is a love story, and the story of one man who has spent his entire adult life fighting -- and finally finds happiness. The tale is just so rich, I cannot say enough good things about it. It has to be one of the best books -- and the best series -- I've read in my life.Fair warning to everyone, though -- if you thought that the family tree was convoluted to begin with, just wait. It gets even more mixed up. All you can do is sit back and enjoy the ride -- I certainly did.

Published by Thriftbooks.com User , 18 years ago
Twenty-five years ago, the Southern rulers were more interested in playing petty political games against one other than destroying the Empress Chytrine. Now she has built up her strength and has captured Fortress Draconis, which allows her hordes of the North to capture some of the southern realms. Her army also hunts for the pieces of the Dragon Crown.The council of kings meets in Narriz to decide how to fight Chytrine's forces, a very hard job since she has turned one of the kings into her enslaved creature. She also walks among them using her magic to pass off as one of the royals. The true heroes of the conference are not the rulers. The champions include Princess Alexia, Prince Erlestoke (who is willing to defy his father if it means killing Chytrine), Alexia's lover Kedyn's Crow who has fought the empress for a quarter of a century, the powerful mage Kerrigan, and Resolute the Vorquellyn elf who is determined that his homeland will be returned with the fulfillment of the prophecy. These brave souls are steadfast in their quest to regain the lost lands and put an end to Chytrine's reign of terror.This novel is aptly named as the civilized countries of the South (comparable to the European armies wanting to free Jerusalem from Muslim rule) do their part to try to oust the evil ruler and her minions in Aurolan. The various sub-plots showcasing the many heroes give the reader a feeling that after three books, there will be a final resolution, one that is realistic and satisfying. THE GRAND CRUSADE is epic in scope and will appeal to readers who like larger than life fantasy and sword and sorcery sagas.Harriet Klausner

Published by Thriftbooks.com User , 18 years ago
Stackpole has continuously put forward remarkable novels. Despite this, he is not given the credit he deserves. I have read Jordan, McCaffrey, and many other popular fantasy writers, and none of them have published anything that compares with Stackpole's best novels (I won't compare him with Tolkein because, quite frankly, you can't beat a legend...you can only become a legend yourself). Stackpole's stories are filled with original plots, characters, and twists; yet draw enough from traditional fantasy(i.e. elves, magic, etc.) to be easily understood by the common fantasy reader. This mix of originality with familiarity is combined with a superb storytelling ability to create books that grab your attention and don't let go until they have guided you through amazing worlds, cultures, politics, characters, and stories. The Grand Crusade in particular is among Stackpole's best. Without giving any major spoilers, I will just say that it brings back some much loved characters from The Dark Glory War, introduces some great new characters, includes more unexpected plot twists than the other books in the series, and still manages to end the Dragoncrown War Cycle remarkably well. Finally, I don't know if he will ever see this, but I would like to thank Michael Stackpole for all of his hard work. He has provided me with years of enjoyable reading. If you are reading this review and have never read Stackpole's work before, then I would recommend you start with either Talion: Revenant or The Dark Glory War.
Copyright © 2022 Thriftbooks.com Terms of Use | Privacy Policy | Do Not Sell My Personal Information | Accessibility Statement
ThriftBooks® and the ThriftBooks® logo are registered trademarks of Thrift Books Global, LLC