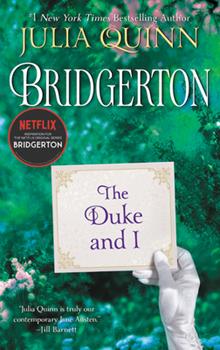 The Duke and I: Bridgerton

(Book #1 in the Bridgertons Series)

A #1 New York Times Bestseller From #1 New York Times bestselling author Julia Quinn comes the story of Daphne Bridgerton, in the first of her beloved Regency-set novels featuring the charming, powerful Bridgerton family, now a series created by Shondaland for Netflix. In the ballrooms and drawing rooms of Regency London, rules abound. From their earliest days, children of aristocrats learn how to address an earl and curtsey before a prince--while...

Is there a plot?

Published by Anne , 1 month ago
I read this as a library checkout...kept on to the end trying to find a plot...there didn't seem to be any...just strung-together bed romps and so on....never bothered with another one in the series....

Published by marz.finds , 4 months ago
Better than the show. I couldn’t put it down. It’s very detailed and graphic(18+).

Published by Beth N , 5 months ago
I ordered this book specifically to get the 2006 cover, which was what was advertised by its photo. I, however, received the original 2000 cover. I was disappointed upon opening the package.

Published by Quanisha Smith , 5 months ago
I made the mistake of watching the tv show before reading the books. But I did not disappoint. Though the show has a lot more stories included and the book is just about the Daphne and Simon’s romance, it was still a fantastic read! Highly recommend buying the second book along with the first so you aren’t waiting in anticipation.

Finished in one day

Published by CheshireKitten , 1 year ago
This book is beautifully written. It doesn’t spend an ungodly amount of time setting the scene. It cuts right to the story. I fell in love with all of the characters and adore their wit and how they embrace the circumstances they face. I will be buying the second book immediately

Published by B+ , 1 year ago
Daphne and Simon’s story is just as good as you’d expect. I had to finish this book in one sitting. I highly reccomend the first Bridgerton book, you won’t be disappointed.

Published by TashD , 1 year ago
Yea, I jumped on the Bridgerton train. And you know what?! I have no regrets! It was so good, so fluffy, and made me super happy. I absolutely cannot wait for the next installments so I can gobble up the tv series as well!

Published by afishinmn , 2 years ago
Light, fluffy, fun, Austen-like... until about 80% into the book when the main character does something so awful, I wanted to toss the book across the room. Trigger warning for date rape, basically. So disappointed.

Published by Thriftbooks.com User , 21 years ago
Duke and I, is the first book of the Bridgerton Series.  2nd book is The Viscount who love me, 3rd would be the An Offer From A Gentleman which is still coming soon on July,2001.  I read this book in one sitting, finished at 5am in the morning & was a zombie at work few hours afterwards :-)    Since Julia Quinn is new to me, I honestly didn't think this book was going to keep me up all night.  I was mistaken. Simon Basset, Earl of Clyvedon, Duke of Hasting is far from the regular heroes of most historical romance novels that I have read.  Yes, he was described as handsome, rich, intelligent & a RAKE - just like most heroes...  What made him different from the others is that he have a stuttering problems, which he has learned to control as he grew up yet it's still there when he's nervous or upset. This flaw made Simon more human, realistic. He had an awfully sad childhood too.  His father denied him love and privileged because of his stuttering. His father was so shamed of him that he told people he no longer had a son. He would rather passed his dukedom to his cousin than to his son who he called stupid, idiot, imbecile and nitwit. This lead Simon to hate and yet it inspired him to worked hard in order to proved his father wrong.  In the end, his father proudly saw that Simon was actually worthy of his dukedom and passed it on to him when he died.  Because of his father's obsession on his dukedom lineage, Simon vowed never to marry, never to have children - to end the blood line with him.  But when he returned to England & inherited his dukedom after his father's death,  he was sought after by every MOTHER of the ton with marriageable daughters.  Dafne Bridgerton on the other hand had a full happy childhood.  Even if her father had died when she was only 10, She grew up with a loving mother,  7 brothers & sisters - who are all close knit.  Naturally, because of her happy experience as a child, she longed to get married and have lots of children just like what she was use to growing up with. Being a wife and motherhood is her simple dream.   Unlike most heroines of historical romances novels, Dafne didn't have an extra ordinary beauty but she is sweet, funny, philosophical, strong willed & determined.  She might not have "THAT" extra ordinary beauty but she is well liked by everybody... and that is somehow a problem in finding a suitable husband.  She possessed a unique character that draws every people to view her simply as A FRIEND. That is one of the two reasons why most eligible bachelors doesn't court her.  She was everybody's friend.  The other reason was his 3 elder brothers ( Anthony, Benedict & Colin) who watched her like a hawk.  To keep ambitious mothers with marriageable daughters away from him, Simon propose a scheme to Dafne, who happens to be Anthony's (Simon's best friend) younger sister.   They will feign "attachment".   In return, he insisted to Dafne that when the Ton realize that the Duke had captured an intere

Published by Thriftbooks.com User , 22 years ago
I do like reading Romances but I've often found that many of them sound the same. Certainly the plots change and the character names and circumstances change -- but the essential dialogue and tensions often replicate themselves in book after book. This gives many Romance novels a homogenous, artificial flavor which I don't like and I feel cheated when I read books like this because I feel as if the author has underestimated the intelligence of her/his reader. How refreshing it was then to read Julia Quinn's, "The Duke and I." This was my first (certainly not my last) Julia Quinn book and I was highly impressed with her ability to create characters who don't always speak and behave the way you expect them too. Daphne and Simon's relationship is believable, they seem like "real" people and their problems were fairly ordinary and not overly dramatic or contrived. The secondary characters each deserve (and will probably get) a book of their own. Quinn also had a knack for making me laugh -- the humor was not forced or too cutesy, just well written. Although this book is set in the Regency period, it is not your "traditional" Regency as it does contain some frank sex scenes and the characters often act with a more modern sensibility than one might expect. In any case, this was a great read and I am eagerly looking forward to reading Quinn's other novels.

Published by Thriftbooks.com User , 22 years ago
This is the first book I have read by Quinn and I have enjoyed it immensely. It had been recommended by a friend and now it's my turn to do the recommending. Despite a few heavier scenes, I would call this a fairly lighthearted romance filled with fun and laughter. Don't get me wrong though. The heavier scenes kept the story from being too fluffy or shallow. In fact, I would say it rounded the whole thing off quite nicely. The Whistledown reporter was a delightful addition and I was left wondering who exactly she was. I look forward to the next Quinn book to see if we actually do find out her identity. I especially enjoyed the scenes where Simon joined the family for dinner and later an outing to Greenwich. Simon was a wonderful hero; strong, handsome, great sense of humor, and his one "inadequacy" was endearing, although HE might not think so. Daphne was a terrific heroine. Charming, witty, and if not wise in the world, wise in matters of the heart. But, for me, of course it was Hyacinth that stole the show.

Published by Thriftbooks.com User , 22 years ago
I have read all of Quinn's works (all that she has written for Avon, at least) and she just keeps getting better. I have liked and kept all of her books because I like her style of writing. Nothing heavy here and that's why I read. I'd rather be entertained by a light, witting and sometimes touching story than be tortured with reading about rapes and characters who don't talk to each other until the end of the book. I guess there are quite a lot of other readers who share my views, because Quinn is becoming extremely popular. Simon and Daphne, the main characters, blend so well together. While Simon might be sterotyped as the typical brooding hero, Daphne is the one who does enough talking for both of them. The secondary characters are also a treat. Daphne's mother, I thought, was hilarious! 'TDAI' has just the right mix of humor with a dose of tension at the end to make it a highly entertaining read. Quinn reminds me alot of Amanda Quick, another of my favorite writers. I'd probably rank this most recent work higher than five stars if I could. I thought it was that good.

The Duke and I Mentions in Our Blog 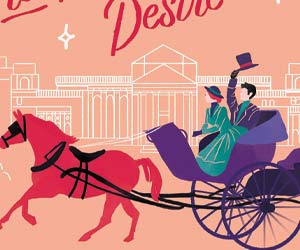 Got the Post-Bridgerton Blues?
Published by Ashly Moore Sheldon • April 07, 2022

Has Netflix's adaptation of Julia Quinn's Bridgerton series left you breathlessly yearning for more stirring historical tales and petticoat-infused romance? We have suggestions for what you should read and watch next. 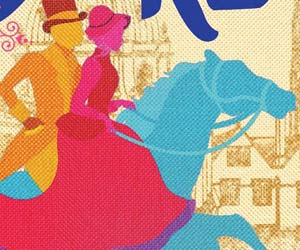 The fact that romance novels often employ familiar tropes doesn't make them any less enjoyable. In fact, some of us never tire of certain delicious scenarios like mistaken identities or marriages of convenience. Here we review some of the top tropes in Regency romances. 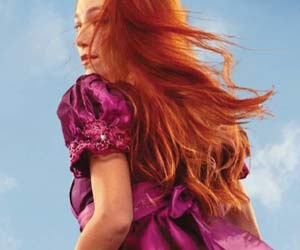 What is it About a Duke?
Published by Ashly Moore Sheldon • February 10, 2021

Has Netflix's adaptation of Julia Quinn’s Regency-era Bridgerton series left you breathless for more corseted couplings and lustful liaisons? We have suggestions for your next book, movie, or series!