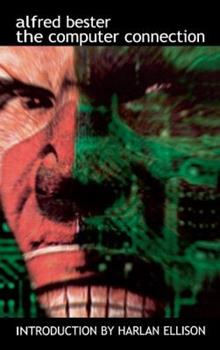 Alfred Bester's first science fiction novel since The Stars My Destination was a major event-a fast-moving adventure story set in Earth's future. A band of immortal-as charming a bunch of eccentrics as you'll ever come across-recruit a new member, the brilliant Cherokee physicist Sequoya Guess. Dr. Guess, with group's help, gain control of Extro, the supercomputer that controls all mechanical activity on Earth. They plan to rid Earth of political...

Published by Thriftbooks.com User , 19 years ago
It's a wonder nobody ever thought of filming Bester's books, for they have an effect much similar to that of a good movie - they rock you in your chair. Decades before anyone thought of the term "Cyberpunk", Bester already had his own view of the future, which happens to be very similar to the present - our present, the future present, even Bester's present. That is, of course, no accident, for Bester never forgets he's dealing with people, not machines - a fact which doesn't prevent the book from being filled with action, fun, (weird) technology, immortal people (among them an original neanderthal), an eccentric alien, and even some more conventional SF elements, such as The Mad Professor and a Time Machine.Brilliant dialogues, thrilling action, unforgettable characters... In short - don't forget to get your hands on that one as soon as possible. I'm sure you won't forget to thank me for that advice...

Fun, Fast and Far Ahead of Its Time

Published by Thriftbooks.com User , 19 years ago
This is a great piece of SF adventure. It presages cyberpunk and does a better job of creating an underground society of eccentric immortals that The Highlander ever hoped to.The novel is fast-paced, full of satirical gems, and funny as all get-out. But at the same time, it manages to support themes about technology, human evolution, and love and loyalty that are handled with as much thought and heft as any "serious" work.The only gripe I've ever had with this book is that it ends way too soon, and in fact is screaming out for sequels that have never come. Not that the plot isn't fully wrapped up-- it's just that you hate to leave the company of these people who are so funny, profound, and warmly human. This is a must-have book for any SF reader.

Published by Thriftbooks.com User , 20 years ago
This is one of the craziest and funnies books I've ever read, as good as Douglas Adams but with added value - characters you care for.The story takes place in a demented future that is a precursor to the generic cyberpunk future, with corporations, computers, drugs and implants. But this is Bester's upside-down world, where gangs of senior citizens mug youngsters and whites are an opressed minority. The book is chock-full of eccentric characters, Bester's usual freak and mutants, unlikely technology (the police are using giant pogo sticks as a means of locomotion), and all that is described at a break-neck speed that is Bester's trademark writing style.This book was my all-time favorite book for a long time and I have read it numerous times. I just can't recommend it enough. Read it, now.

Published by Thriftbooks.com User , 20 years ago
When this book first came out in 1975, it was Alfred Bester's first science fiction novel in twenty years. Bester's first sf novel (The Demolished Man) won the very first Hugo Award for best novel. His second (The Stars My Destination) is so dazzling it leaves TDM in the dust; it's considered by many (including me) to be the finest sf novel ever written, then or now. So you can only imagine the kind of anticipation that this novel generated. The buzz at the time was that it didn't "live up to the greatness of Bester's earlier work". I've even heard it referred to as "third-rate Bester". This is out-and-out balderdash (I'd use a stronger term, but then this review wouldn't get past the censors :-)). This novel doesn't compete with the earlier novels; it works on its own terms. It's the story of a society of immortals in a very bizarre future indeed, and their struggle against a computer which wants to take over the world. What impressed me most of all is that Bester's trademark "pyrotechnic" style hadn't been diluted at all in the twenty years since he wrote TSMD; if anything, this book is even more outlandish (a case in point: its characters speak a weird mishmash of languages of which twentieth century English, or "XX" as its known, is one of about ten). Bester's usual theme of man becoming superman is here again as well, but in a totally different setting. This story doesn't take itself as deadly seriously as TDM or TSMD, which may account for the lukewarm reception it received. Despite this, it's a thoroughly satisfying read that is miles ahead of most sf in terms of its imagination, its plot and its humanity.
Copyright © 2020 Thriftbooks.com Terms of Use | Privacy Policy | Do Not Sell My Personal Information | Accessibility Statement
ThriftBooks® and the ThriftBooks® logo are registered trademarks of Thrift Books Global, LLC