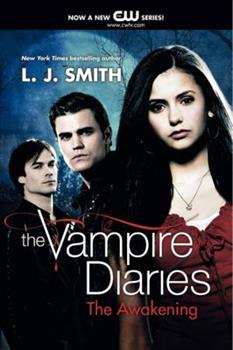 The Vampire Diaries: The Awakening

The New York Times bestselling series The first book in L.J. Smith's New York Times bestselling Vampire Diaries series, the basis of the hit CW TV show starring Nina Dobrev, Paul Wesley, and Ian Somerhalder . Elena Gilbert is a high school golden girl, used to getting what she wants. And who she wants. But when the boy she's set her sights on--the handsome and haunted Stefan--isn't interested, she's confused. She could never know the real reason Stefan...

Love the show and most definitely love the books

Published by Dezeray , 10 months ago
I just ordered it last week for my free book and it is in good condition! Love it!

didn’t even receive the book

Published by powerrpuffgurrl , 1 year ago
didn’t even receive the book

Published by Thriftbooks.com User , 22 years ago
The Awakening is the first books in one of L. J. Smith's early series, The Vampire Diaries, and was first published back in the early 90s. This series is one of the better teen horror ones. Leaving at least some of the formulas behind, #1 The Awakening sets up the main characters and the center love triangle: vampire brothers Stefan and Damon Salvatore, whose fight over young vampire Katherine in Renassaince Italy led to their turning, and Elena Gilbert, the human high school girl that will renew their centuries-old feud. Highly reccomend for horror and vampire fans.

One of the greatest books ever!

Published by Thriftbooks.com User , 23 years ago
This is not just another "I'm going to bite you" vampire book. This one has more quality and understanding to the feelings of their nature. Mrs. Smith writes terrific novels about the bravery and courage the main characters have and what they go through to procede that way. It's not easy but you'll see that none of them will ever quit in what they believe in.

Published by Thriftbooks.com User , 23 years ago
I loved each book in Vampire Diaries (can't underline)!!! My favorite of all of them was The Awakening because it was so mysterious and the first impression that Elena got of both brothers is so perfect that it builds the suspense. I read each book in no more than two book-gripping nights. I reread them all again two years later and read them with the same feeling of "I-have-to read-sydrome." I am never going to let any of them out of my sight-especially The Awakening. They will be passed down to any children I might have in the future. Every one of them, especially the first, played a great part in me taking a voracious appetite to reading. Before I read L.J. Smith's The Awakening, I only read required books at school. After I read The Awakening's first chapter I knew I had found a new love and I would forever be searching for her name in every bookstore I came across. I know that if you read it, you too, will feel compelled to search for her. Hopefully, she will write books for everyone to enjoy in the near future-Until then, I know a lot of people who will search the isles in each book store anxiously awaiting a brilliant work of fantasy to come into bloom. I recommend that if you read Larell K. Hamilton's Anita Blake Vampire Hunter series and loved it, you will be enamored with L.J. Smith's Vampire Diaries: The Awakening (as well as her other books in the series). It's the first book I ever really picked up and read cover-to-cover, and although I have read countless books since then, I remember Vampire Diaries: The Awakening (and the rest) like I just read them yesterday!

Best series to read and reread and still be entertained

Published by Thriftbooks.com User , 23 years ago
I stumbled on to this series at a book store many years ago. I couldn't believe that there were books this well done. This series takes you into it. You are right there watching everything happen. The flashbacks are extremely vivid also. Smith keeps you in her creation because you end up reading and rereading the series. The Diaries encaptured me to the point where I was crying my eyes out at times and I had to put the book down for a minute. I used to ignore my other novels and just read these. I would even take them to school and show my best friend. HE even began to love the series. It is well worth your time and money.
Trustpilot
Copyright © 2022 Thriftbooks.com Terms of Use | Privacy Policy | Do Not Sell My Personal Information | Cookie Preferences | Accessibility Statement
ThriftBooks® and the ThriftBooks® logo are registered trademarks of Thrift Books Global, LLC