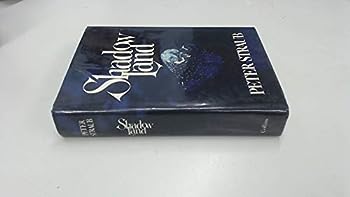 This description may be from another edition of this product. You have been there if you have ever been afraid. Come back. To a dark house deep in the Vermont woods, where two friends are spending a season of horror, apprenticed to a Master Magician. Learning...

Yes, it really is that good. 5 stars easily.

Published by Thriftbooks.com User , 15 years ago
What a work. I originally read it a decade ago as a kid, I recently picked it up again, and wow, it's even better this time around. Another reviewer noted that it's a shame this book doesn't get more attention among the works of Peter Straub - that reviewer is absolutely dead on. I'd still have to rank it, among Straub's books, a close second - how can you top "Ghost Story?" Well, "Shadowland" comes very, very close to doing just that. I imagine this is the kind of book that, as a writer, after you finish it, you kind of lean back in your chair, smile, and say, "Ah, I really am that damn good." It has incredible settings. The prep school in Arizona pulls off as interesting dichotomy: it feels, for a large part, like a true-to-life coming of age story, rich in detail and characterization, that you would expect from the era it is set in. But it also has that dark, supernatural twist, and that aura of "something is terribly wrong" that makes it such a delicious read that brings to mind Graham Joyce in his element. And Shadowland itself! Shadowland, that great estate! Shadowland equals and, dare I say, surpasses in places, masters like Neil Gaiman and Clive Barker in fashioning and sculpting a truly gripping and fantastic world. The sights, sounds, spectacles, and characters of Shadowland are fantastic. I'm not going to outline the plot in any real depth, it's been done on here already. The book is one of the greatest of the "horror bildungsromans" in existence. It is told in a narrative form that flashes between the past and "present," which I did not find confusing at all. I think it seemed like a natural and rich way to get at the story. The main characters are Del and the protagonist Tom. Both are marvelously fleshed out. Coleman Collins is a great character, a man who seems to be a gregarious if somewhat somewhat rough-around-the-edges and mysterious magician. Early in the book he comes off sort of as a hard-drinking, "black-sheep-uncle-of-the-family" with some sordid elements. He tells the boys (and the readers) great stories, takes them to wondrous places in their minds, and puts on grand shows and illusions in his elaborate and huge house of tricks. Later however, it appears he may be far more sinister and calculating than expected. The mysterious and lovely Rose is another fascinating character, whose introduction into the story adds a major wrinkle to the plot. Skeleton Ridpath is an effective villain whose later appearance is a surprise once it is understood, and horrifying. I could go on and on, but the point should be clear by now - this is a great book, a work of art in my opinion. Do not be put off by other reviews that compare it to Harry Potter (Shadowland came first by more than a decade and is more complex, darker, and more intelligent) or reviews that complain about the book because it does not have a straight arrow, linear narrative style. This is a satisfying read that has a lot of treasures to offer up. I would recommend

Published by Thriftbooks.com User , 17 years ago
I first read this in 1984 at a christian youthcamp 'retreat' with compulsory 'outdoor activities' in subzero weather. It was there that I got hooked on quote marks and phonics. It was there that I began to see that adults could be as clueless as children. I return to this book at Christmas when the weather looks bleak. As a coming of age novel, it speaks more clearly to me than some classics I could name. One caution The first pages confuse. Mr. Straub likes to spin you around before telling you a story. It breaks you out of your world and preps you for his. I'm lucky to find such a great story teller.

Published by Thriftbooks.com User , 18 years ago
Shadowland, by Peter Straub, is a piece of really excellent high-end horror. The book begins in a private prep school for boys. In this school, Del and Tom, two freshmen boys fascinated by magic, find each other and form a strong friendship. Together, they learn card tricks, try to figure out why the whole school is having nightmares, dodge the crazy headmaster of the school, and do the sort of pal-around that only boys of a certain age can do. Their school year culminates with a big talent show in which Del and Tom plan to perform a magical exhibition. Circumstances in the story keep this from happening and the boys retire for the summer to the estate of Del's uncle, Shadowland.Del's uncle is a half-crazy, alcoholic, retired magician. He sets about teaching the boys magic. His magic, though, consists of more than tricking the eye with a slight of hand. At Shadowland, nothing is as it seems. An hour can feel like all day. The sun can set at 11am. You can find yourself suddenly half-way across a continent, just to find that you haven't moved from your spot at all. There are others living at Shadowland that are unseen, and whose existence is denied. There are rules that are made in the hopes of being broken. As Del's uncle spends the summer recounting his life, in all it's horror, to the boys Tom realizes that the horror is only starting. As he sees things that can't be real, but are, and he sees the immediate horrors being committed at Shadowland, Tom realizes that he has to leave, and Del must come with him. Unfortunately, for Tom and Del, Uncle Collins has realized something about Tom that even Tom doesn't yet know - and he wants it for himself. In Shadowland, Peter Straub has written a brilliant piece of fiction. There are plots, subplots, and subplots within those. Nothing in this book is without purpose to the story. Straub's writing, which has a definite British bent, despite the story being set in the United States, is very literary and rich. More complex than Stephen King, Straub is still very readable, especially to those who like a thicker story. No one who enjoys literary horror will be disappointed for having read this book.

Published by Thriftbooks.com User , 18 years ago
I completely agree with a previous comment about this novel making a great film. I would love to see some of those fantastic scenes played out on the big screen. It does jump around a bit, but I think that this is SUPPOSED to confuse us a little to add to the general feeling of "what is real, and what is not----where am I?". I finished the novel in 2 days and was left with the sense of delicious gloom that made me want more---and I confess that thoughts of "The Collector" disturbed my sleep just a little.

Published by Thriftbooks.com User , 24 years ago
Rates in my top five all-time favorite books. This one delivers it all. Caught somewhere between a fever dream and the cool, longing whisper of a childhood memory, this book does what so few can: creates a narrative that is truly unique. As a film director, I have watched and read--"absorbed"--so many stories, that it is impossible not to see lazy "cookie-cutter" storytelling in almost everything. How often have I picked up a book or watched a movie with an interesting premise only to find that it is just like every other book or movie. Not so with Shadowland, which kept me forever off balance--but not enough to lose me. I was lost and riveted at the same time.With absolute precision, Straub brings to life the adolescent's journey into manhood; how even everyday life can be a wonderous, terrifying mystery. By reframing this subtext within the confines of Shadowland itself--the magician's mansion--Straub creates a level of uncertainty and terror that you will feel lingering with you long after you've closed the book.I can't imagine that this book will suit everyone's taste; but for anyone who likes their fiction to remain elusive, revealing, suprising, this is a book that will haunt you for years to come.
Copyright © 2020 Thriftbooks.com Terms of Use | Privacy Policy | Do Not Sell My Personal Information | Accessibility Statement
ThriftBooks® and the ThriftBooks® logo are registered trademarks of Thrift Books Global, LLC