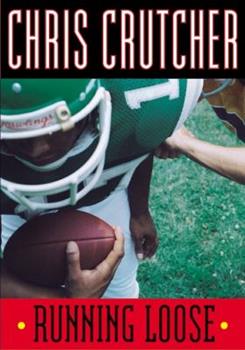 Louie Banks has it made. He's got a starting spot on the football team, good friends, and a smart, beautiful girlfriend who loves him as much as he loves her. Early in the fall, he sees all his ideas of fair play go up in smoke; by spring, what he cares about most has been destroyed. How can Louie keep going when he's lost everything?

Published by Thriftbooks.com User , 15 years ago
This book Running Loose by Chris Crutcher was a very good book. It took a short while to get into it but once you did it was hard to put down. In the book, a kid named Louie Banks has everything going his way so far in his life. Chris does a great job of bringing Louie to life in this book. Louie is a senior attending Trout High School in Trout, Idaho. He has a beautiful girlfriend that no one expected him to have; even himself, and a great spot on the eight-man football team. During one of the games, Louie explodes because one of his teammates, Boomer Cowans, purposely hits a kid and puts him out of the game. He has to put up with Boomer, the big bully of the school, constantly after that. Louie gets into a big fight with the coach and gets kicked off of the team. Carter Sampson, the quarterback of the team and Louie's best friend, helps him through his problems. Things start to go downhill from there. Louie has other big problems to face but you will have to find out for yourself what they are. I really liked the fact that this was a very realistic book and could happen to anybody in high school. Louie goes through problems that anybody could face in the real world today. I really enjoyed this book.

Published by Thriftbooks.com User , 19 years ago
Running Loose is a well written young adult novel about a boy who starts the year off great but then tragedy strikes. The author, Chris Crutcher, related the characters in this book towards the teenage person. This book is aimed toward a more mature audience, children under the age of thirteen should not read this book unless really mature. There are a lot of curse words in this book. This book has become the favorite of many of my classmates. The main character, Louie, appealed to me as a reader because he acted the same as the people in our high school. Louie comes into the year wanting to be a super star, but when an illegal hit is called on a black quarterback from another school. Louie objects the call and goes against all the odds during this book. Crutcher has good supporting characters in this book. Becky, Boomer, and Carter all are there for Louie in his tough times in his senior year in high school. Coach Lednecky and principal Jasper are very racist and do not like change or controversy of any kind. When the controversy about the cheap shot on the other quarterback comes up, those two run and hide like little cowards.Overall this book was well written, it has alot of mature teen language and is appealing to boys more than girls because of the athleticism and dirty language.

A VOICE OF COMFORT

Published by Thriftbooks.com User , 21 years ago
Poor Louie has a lot to contend with, including being the victim of a false accusation. Not to fear, folks -- Louie rises above his obstacles in a totally plausible, realistic and very sympathetic fashion.Chris Crutcher followers will not be disappointed. The author tackles with sensitive, adult themed issues head on in a very intelligent and forthright fashion. He compliments the intelligence of his readers and he does not soften his tone for anyone, to his credit. Chris Crutcher is a truly outstanding, high caliber, first rate author. I wish I could rate this one more stars.

Published by Thriftbooks.com User , 22 years ago
This book was the best of the Chris Crutcher collection. It was a moving story of a high school boy who gets kicked off of the football team. After that everything went downhill, but to him nothing went wrong as long as he has his girlfriends love. When tradgety stikes you see the effects on Louie. Read it and find out more!

This book is very interesting, it has a lot of drama

Published by Thriftbooks.com User , 22 years ago
This book is very interesting! It tells a lot of things that could happen to a high school student every day. It also has a good plot. Louie is a senior in high school. He plays in sports and he has a lot of friends. He also has a girlfriend whom he loves. Then a lot of things start to go wrong and Louie gets kicked off the football team. After that his family, bestfriend, and his girlfriend give him a lot of support. Louie says, " he can face anything as long as he has Becky's love". Towards the end something tragic happens to his girlfriend. Everybody in the town thinks that he is acting weird. He has a lot of anger and he needs to let it out. I think that you should read this book; it is great book!
Copyright © 2020 Thriftbooks.com Terms of Use | Privacy Policy | Do Not Sell My Personal Information | Accessibility Statement
ThriftBooks® and the ThriftBooks® logo are registered trademarks of Thrift Books Global, LLC