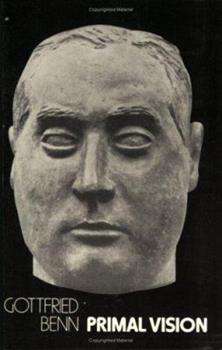 Gottfried Benn (1886-1957) occupies a position in modern German literature often compared to that of T. S. Eliot and Ezra Pound in English. This volume presents a comprehensive anthology of the author's finest work-poetry (with the German originals en face), short stories, a scene from one of his plays, essays and autobiographical writings, including a unique insight into the German intellectual metamorphosis before, under and after Hitler. And in...

Published by Thriftbooks.com User , 20 years ago
At present I am translating for an English publisher a collection of poetry and prose by Gottfried Benn. So I am familiar with the title piece ÒPrimal VisionÓ or ÒUrgesicht.Ó It is one of the pieces I have excluded from my collection, and here is why: It is very hard to translate. As a linguist, I am not afraid of the sheer difficulty, but there is also an other aspect. Translating imaginative literature is not like translating for the United Nations. There are 2 major barriers: an unfamiliar language and unfamiliar conventions of style. The problem is to translate faithfully without producing something too outlandish to be acceptable for the English/American reader. BennÕs ÒPrimal VisionÓ is hard to categorize - it is not a story, but it also is not like the explanatory prose for an essay. At best we should think of it as a verbal collage or a prose poem in RimbaudÕs vein. There is a line of thought behind it - or rather an obsession, one of BennÕs pet-hates. It is a powerful expression of the authorÕs disgust with the empirical realism of modern science (written by an extremely well trained scientist) and also expresses a for the time very common sentiment of disappointment with rationalism and neo-Kantian idealism. Plenty of Ò-isms.Ó But none of this shows on the glittering surface created by one of the great linguistic geniuses in his language. Benn had a small but devoted following in France, way back in the nineteen twentieth. He was credited to be one of the 4 major poets of his time in the whole of Europe. In his own country he was less appreciated, but still acknowledged as one of the leading intellectuals before 1933. Then came Hitler and Benn fell into the trap of his own irrationalism. He found the vulgarity of the Nazis despicable, and he certainly was no anti-Semite, but he agreed on a particularly nasty point, little debated, if at all, that made him a Nazi-sympathizer even after 1945: Benn was a physician by profession, he had a profound understanding of genetics and at least since 1930 his work is laced with approving remarks on eugenic policies, policies which in the hands of the Nazis meant Òmercy killingsÓ of the mentally impaired and mandatory castration of carriers with hereditary diseases. Benn himself had a sister suffering from hereditary glaucoma and he was convinced that even his own family had to be cut off from the gene pool. The result was BennÕs very public commitment to the Nazis after 1933. It immediately ruined his international reputation and alienated him from most of his friends, of which many had fled into exile. However the new masters smelled a rat. Benn was too intellectual, too sharp, too ÒcynicalÓ for their taste; his publications before 1933 contained passages of what could be interpreted as ÒliberalÓ (read his essay on abortion) and lax on morals. BennÕs unflinching view on the facts of biological life earned him the denigration of a Òpervert and sodomite.Ó As a doctor he was stricken from the lis

Published by Thriftbooks.com User , 21 years ago
Gottfried Benn, a German writer and doctor who served in both World War I and World War II, occupies a curious place in the annals of modern literature. His contribution to German letters in the 20th century is undeniable, but his work centers so strongly on the grotesque and horrible that he has never risen to the levels of adoration reserved for poets like Rilke. This is understandable, but a bit of a shame. (Benn's obsession with images of death, decay, and disfigurement are not surprising, considering the fact that during World War I he was stationed in Brussels, where he was in charge of treating the venereal diseases of prostitutes and prisoners of war.) "Primal Vision" is a comprehensive collection of his poems and prose. The prose works are translated into English, and the poems are printed in both English translation and in the original German. This book is perfect for English readers who have never before encountered Benn. (Fans of Benn may want to also check out the album "Morgue" by the German band Das Ich, which sets many of Benn's early poems to music.)
Copyright © 2020 Thriftbooks.com Terms of Use | Privacy Policy | Do Not Sell My Personal Information | Accessibility Statement
ThriftBooks® and the ThriftBooks® logo are registered trademarks of Thrift Books Global, LLC