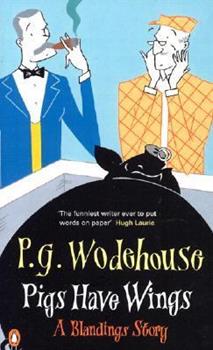 (Book #8 in the Blandings Castle Series)

Clarence, ninth Earl of Emsworth has good health, a large income and a first-class ancestral home. But these blessings count for nothing in the presence of Sir Gregory Parsloe. Lord Emsworth is convinced he has evil designs on his pre-eminent pig, the Empress of Blandings.

Published by Thriftbooks.com User , 18 years ago
P.G. Wodehouse was the 20th century's answer to William Shakespeare reproduced as musical comedy. In Pigs Have Wings, Mr. Wodehouse produced one of his very best efforts. As usual, the themes involve a satire of romantic love, miscommunications between the sexes, the vapid interests of the titled class, and the silliness of people in general. As the book opens, Clarence, ninth Earl of Emsworth finds himself faced with a threat to the supremacy of his pig, Empress of Blandings, in the Fat Pigs class at the Shropshire Agricultural Show. Sir Gregory Parsloe-Parsloe, Bart, of Matchingham Hall, had already hired away Clarence's pig handler, George Cyril Wellbeloved . . . and Clarence is sure that some new skullduggery will soon follow. As the story develops, we find that it's all too true. Soon both pig camps are doing their best to knobble the other man's pig. With everyone else having a bet on the outcome, many other people are soon engaged in trying to sabotage one pig or the other. It's the most pignapping fun caper you can imagine! In the background, we have all sorts of people who've become engaged to totally unsuitable people on the rebound from slights they feel from the one they really love. P.G. Wodehouse does a yeoman effort of returning all of those twisted loves to the proper party. The plot will keep you constantly chuckling throughout. There are quite a few books based on the Empress of Blandings. So if you enjoy this one, go on to the others in the series.

Published by Thriftbooks.com User , 18 years ago
Wodehouse, master of words that he is, shows his wit to be in top form in this wonderfully funny story of Blandings castle. As usual, Lord Emsworth is a bit dazed and obsessing about his pig (now hoping that she'll win first in her division for the third year running at the local agricultural show) and the guests at Blandings are falling hopelessly in love with one another. This is a great book for both those new to Wodehouse and those who have enjoyed his other works. I highly recommend it.

Published by Thriftbooks.com User , 20 years ago
In typical Wodehouse fashion, this is a comical story with many hilarious twists and turns. I found myself laughing aloud in many places. Simply put, if you like Wodehouse and especially the Blandings Castle series, you like this book. It is one of the later "chronicles" of Blandings Castle, but it would be a good read for anyone--even those unfamiliar with Lord Emsworth. This is a great book, and author, for those who enjoy light, comical novels.

Published by Thriftbooks.com User , 21 years ago
Pigs have wings is one of the best books I have read, because it so funny. The way the characters are many times spaced out and the way they act on their stupidity, mostly the way P.G. Wodehouse makes fun of characters. Pigs have wings, is about competition between two pigs for the fattest pig class. They try to steal each other's pig, and the Empress (the name of the hero's pig) has been the winner of this class for two years in a row. All this is tied with some knotted yet silly love relationships. But the way Wodehouse makes fun of it is so funny that you will laugh untill tears start pouring down.

TYPICAL WODEHOUSE AND ONE OF HIS BEST

Published by Thriftbooks.com User , 24 years ago
I originally acquired this book as a result of a minor bet between my aunt and myself. The bet I will not tell you, but I will asure all readers that it was clean and honourable (unlike my spelling). As I said in the title I said it was typical wodehouse. Boy1 meets girl1 and the fall in love, unfortunately a mishap occurs so girl1 goes and gets engaged to boy2 who is really in love with girl2 who used to be engaged to him, then girl3 falls in love with the totally unelegible. In an effort to make him elegible she attempts to find ways to supply cash for the BIG SCEME, which of course she doesn't suceed at, unfortunately, in the process she observes Boy3 (the inelegible) doing something that she believes is inappropriate and as an upshot, gets engaged to Boy1. The problem is then straightened out and Girl3 expresses dismay and tells the truth, much to dismay of boy3. But as always occurs in Wodehouse everyone eventually ends up with the right person. But mixed in with this plot is the enevitable Empress of Blandings, who is moved everywhere, and stolen and has at least one attempt to nobble her, but of course the nobbleing occurs to the wrong pig and Empress comes out as winner. And Gally gets into his usual strife.
Trustpilot
Copyright © 2022 Thriftbooks.com Terms of Use | Privacy Policy | Do Not Sell My Personal Information | Cookie Preferences | Accessibility Statement
ThriftBooks® and the ThriftBooks® logo are registered trademarks of Thrift Books Global, LLC