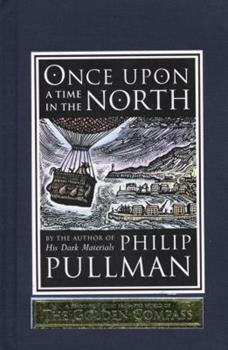 Once Upon a Time in the North

(Part of the His Dark Materials Series)

Here is a story which gives new insights into the world of 'His Dark Materials'. When Lyra is studying at Oxford University, she comes across the story of Lee Scoresby and Iorek Byrnison's first meeting.

Published by Thriftbooks.com User , 12 years ago
Anything by Philip Pullman is a gift, but this beautifully made little book (along with its counterpart, Lyra's Oxford) is particularly wonderful. Not only well-written to provide detailed and fascinating "back story" for characters in Pullman's masterful trilogy, His Dark Materials, but also a pleasure to hold and read--a hard covered book with pages of high-quality paper that are a delight to turn, full of period maps and pictures and printed in an appealing font. Both the story and physical nature of the book will make you feel enriched.

Once Upon a Prequel

Published by Thriftbooks.com User , 13 years ago
"Once upon a time in the North" is the story of young Texan Lee Scoresby, who becomes enmeshed in a political and financial conspiracy to control the Arctic island-city, Novy Ordense. Scoresby becomes the ally of Captain van Breda whose cargo is being illegally held by the minions of an evil mining company seeking to get their candidate elected mayor in an upcoming election. This will make it easier for the company to control the natural resources of Novy Ordense, including newly discovered oil. This is a short story (96 pages) that is completely stand-alone, or that could have fit just as nicely as a rather long flashback in one of the "Dark Materials" books describing an adventure of young (24 years old) Lee Scoresby and how he first met and befriended Iorek Byrnison, future King of the Bears, some 35 years before the events that take place in the "Dark Materials" trilogy. These are the only two characters from the "Dark Materials" to appear, and although "Once Upon A Time" takes place in the same alternate universe and with the same flavor, there is little of the fantasy and SF aspects that suffuse the former books (excepting daemons and talking bears, of course!). "Once upon a Time" is a rather straight-ahead, old fashioned adventure story with a western flavor (guns, hired bad guy, pretty girls, nice girls, a bar, a couple of fights and the hero prevailing at the end), but is nonetheless very enjoyable, especially if you happen to have read the original trilogy. The book was written for a young adult audience in a skillful enough way so as to be enjoyable by young adults of all ages. It is also very handsomely packaged in a very small Navy blue hardcover and comes with a board game in an envelope glued to the inside back cover (that I have not opened). All in all, the entire package seems a good deal especially priced at $10.

Published by Thriftbooks.com User , 13 years ago
I generally don't read the product dimensions for books (barring textbooks) so I was surprised at how compact "Once Upon a Time in the North" is. The cover illustration by John Lawrence is excellent and very striking against the dark blue background. As the book was manufactured in Malaysia, I feel a little home pride. :) A boardgame "Peril of the Pole" is included, nicely illustrated by Lawrence as well. The players (aeronauts) compete to be the final player left on the board (in the air) while navigating the dangers of the North. "Once Upon a Time in the North" can be a stand-alone since it is primarily a prequel to His Dark Materials trilogy. Three "documents" at the end of the book relate to Lyra, but this is the only indication of characters from HDM. The pictures and "documents" flresh out the story of how Lee Scoresby and Iorek Byrnison meet. A 96-page story, the events are very quick-paced. Scoresby crashlanded in Novy Odense where the oil causes some political intrigue. Ivan Dimitrvoich Poliakov, a candidate for Mayor, builds his campaign on anti-bear sentiments, but profit is behind it. A sinister figure from Lee's past emerges which complicates matters. This story sets a loose background for some of the bears' "fall from grace" that held a part in "The Golden Compass." The audience seems to be more geared towards teen readers and older as there are references made to sex - it is not consummated, but the yearning for it is baldly there. The climax of the story is also violent, which may not be surprising after His Dark Materials trilogy, but as this is shorter, it may seem more violent. There are several scenes lightly touching upon the close bond between a human and his/her daemon, but doesn't rehash the scientific explanation of it, of course. If read before the trilogy, readers may not grip exactly how close the bond is (since the trilogy emphasizes it) but gives warning as to possible ways it could be used in the future. "Once Upon a Time in the North" is a strong read for Philip Pullman, His Dark Materials universe and general fantasy-action fans of the non-elf/dwarf/orc type.

Published by Thriftbooks.com User , 13 years ago
A crooked politician and an equally corrupt businessman, a pending election with universal implications, one ice-cold killer and the initial meeting of two friends; Philip Pullman masterfully takes all these elements and weaves an interesting prequel to the classic, His Dark Materials, trilogy. The initial meeting of Texas aeronaut Lee Scoresby - the winner of a hot-air balloon in a recent poker game - and his hare daemon, Hester, with the armored bear, Iorek Byrnison, is explored in this action-packed adventure. The layout of the hardbound novella is certainly a throwback to the past, with the story told in text, drawings and other resources. Included is a fold-out board game, Peril of the Pole, which proves that imagination still goes a long way in having fun. This YA fantasy series continues to take twists and turns through an epic landscape.

Worth the wait ! -- Book & Audio Version

Published by Thriftbooks.com User , 13 years ago
Finally the second of a pair of short books with further & earlier stories about the characters of "His Dark Materials" has arrived! Readers who have eagerly followed developments have been calling this the 'little green book' to match with Philip Pullman's 'little red book', "Lyra's Oxford" (10/03). But that was only provisionally, as it turned out to be an attractive,dark blue little volume with an extra. One almost expected the fold-out board game. The charming John Lawrence black & white wood-cut illustrations are an attraction in their own right. I even framed my map from "Lyra's Oxford" it's so attractive & one can follow the action of the story as it moves across the city. The recent book features witty dialogue by aeronaut Lee Scoresby; Mr.Pullman shows a good ear for American dialect, in this case Texan, & doesn't overdo it. For those who might be interested in the author speaking about one of the inspirations for the entire "His Dark Materials" series,epic poet John Milton, here is the link.(see Comment below) 'Lyra's Oxford was a dark red book. "Once Upon a Time in the North" will be a dark blue book. There still remains a green book. And that will be Will's book. Eventually...'--Philip Pullman *** "Once Upon a Time in the North" (Audio Version) *** This excellent audio telling of the story is highly enjoyable. I ordered both book & the Cd box together and read & listened at the same time. It is the second of three projected 'little books'which cover parts of the main story before & after events in "The Golden Compass" ["His Dark Materials"]trilogy. The same cast of voices as the large boxed sets of the complete trilogy, plus the author, Philip Pullman, a fine narrator, speeds through the simply plotted, interesting tale. The special inserts are not exatly the same as the printed book; the 'Peril of the Pole' boardgame is not included. The size of this nicely produced Cd is slightly larger than the "Lyra's Oxford" audio set, & thus will not match it perfectly on a shelf. The book versions are same the size. On the other hand, the book version has some facsimile letters that are read on the audio version. All in all,a charming, well-done production by Listening Library, highly recommended for "GC" fans and new converts. One rather wishes that Mr. Pullman himself would record a selection of stories. When I had the pleasure of meeting him a few years ago in Oxford, I was most impressed with his clear, baritone speaking voice and his performance on this Cd bears that out.
Copyright © 2020 Thriftbooks.com Terms of Use | Privacy Policy | Do Not Sell My Personal Information | Accessibility Statement
ThriftBooks® and the ThriftBooks® logo are registered trademarks of Thrift Books Global, LLC