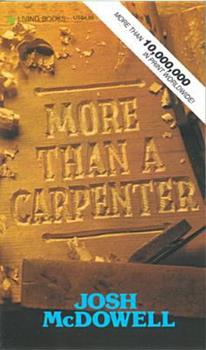 More Than a Carpenter

Josh McDowell thought Christians must be "out of their minds". He put them down. He argued against their faith.But eventually he saw that his arguments wouldn't stand up. Jesus Christ really was God in human flesh. Josh became a speaker on college and university campuses, challenging those who were just as skeptical as he had been.In More Than a Carpenter Josh focuses upon the person who changed his life -- Jesus Christ. It is a hardheaded book for...

Published by Brittany , 8 months ago
I bought this book as part of a Christmas gift for a friend. She enjoys religious literature, and gave me positive feedback on the book.

Great book for the hard questions

Published by Thriftbooks.com User , 2 years ago
This book was very informative about many of the harx questions that skeptics pose. If you have any doubts, get this book!

Published by Thriftbooks.com User , 20 years ago
I was raised a Roman Catholic as far back as I can remember. Tragedies in my life immeasurably challenged my belief in God. It was challenged to the point where I began to despise talk of religion, specifically the faith I was raised with -- Christianity. I began to consistently ask myself, "Is God real??" My "blind belief" wavered to the point where I found myself with a strong tendency to challenge religious believers, almost to the point of unconsciously trying to convince them out of their faith whenever I can. I became a man of logic and reasoning, and simply could not entertain "blind belief" in any way.Then I read this book. It was logical and compelling, and I found myself with no sound way to refute what Josh McDowell was saying. I could criticize his thoroughness, but diving into excruciating detail onto the sciences he employed would've been criticized as redundant. It did not have the "hype" and "hoopla" of "Praise the Lord!" mentality. It was just plain scientific reasoning, logic, and common sense.I saw the criticisms other people had of this book, and I find it hard to understand how they could castigate this book as they did. I was very steadfast in my resentment towards Christianity, but I was influenced otherwise -- I just had to be because the logic that the author used, for me, made sense. For example, I lost a great deal of faith in Christianity when I learned how the Bible was written many years after Jesus' death, and that it was largely a result of "word of mouth". But the author points out that if the miracles of Jesus were farce, how can it withstand its persistence through all those years? If any of us decided to make some sensational claim like being able to fly without wings, and if we were to start disseminating such information, how long do you think that will last? Will it last decades so as to eventually land on a book of "facts"? The point here is that the human way of doing things has a way of weeding out untruths and inaccuracies of "news", and that the words and deeds of Jesus would not have lasted as long as it did if there were no corroborations so strong as to withstand such forces; this is true for anything, religious incidents or otherwise. For me, this was a reasonable and persuasive argument that Jesus did do what he did, or it would have been shot down way sooner, much less making it into a book.I only have 1000 words for this review, so let me end it by saying this. I now am totally convinced that God and Jesus are REAL. It is hard to accept that at this day and age, and I've been through that phase of constant skepticism.My biggest arsenal against Christianity was my own intellect. But this book used the very foundation I had for disbelieving to show me otherwise. How can I not respect that?

More Than A Book

Published by Thriftbooks.com User , 21 years ago
A reminder for me that my faith is foundationally sound and this is something that is so necessary in order to reach those whose intellect extends beyond their hearts. This helps make sure that no "doubting Thomas's" are lost. As Jesus made sure that he bridged the gap for Thomas with His scars, God has given us the evidence to bridge the gap in His word which Josh Mc Dowell has so eloquently encapsolated and expanded it's authenticity. It makes evangelism that much more empowered and exciting!Thank you, Josh! May God continue to bless you!

Everyone should read this book!

Published by Thriftbooks.com User , 21 years ago
If you are a Chrisitan and need to defend your faith, read it. If you aren't a Christian and doubt Christianity, read it. If you really don't think Jesus is the Son of God, then I challenge you to argue against this book. You can't ignore what's presented here -- either believe it or logically refute it.

A book that will change your life forever; for the better.

Published by Thriftbooks.com User , 22 years ago
It has changed life after life because of its clarity and truth spelled out simply. What a wonderful book.

An excellent resource for those who want to know the truth

Published by Thriftbooks.com User , 23 years ago
The book "More Than a Carpenter" is an excellent resource for finding answers to those tough to answer questions. The information is provided in a straight forward manner and demonstrates what can happen when your eyes are open to the truth; rather than closed to what is in front of you.
Copyright © 2020 Thriftbooks.com Terms of Use | Privacy Policy | Do Not Sell My Personal Information | Accessibility Statement
ThriftBooks® and the ThriftBooks® logo are registered trademarks of Thrift Books Global, LLC