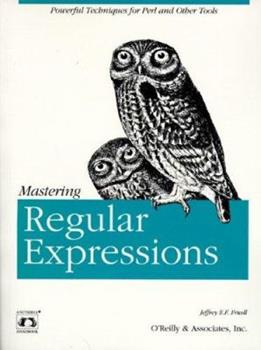 Published by Thriftbooks.com User , 19 years ago
I bought this book on a whim, mainly because I try to buy (and read... ugh!) a hard-core technical book every month or so, but mainly because my UNIX scripting abilities have become rusty with disuse. I used to be able to write a tight, 10-line csh script to mangledit thousands of files at a single time. Now I hack away at files manually with vi. The other day, I even forgot how to search & replace. My kung fu isn't nearly what it used to be.It usually takes me about a month to slog through a new book (especially academic texts, which are great but make you want to have a stiff martini before each new chapter) but I tore through Friedl's book in a few days. It's an outstanding reference for understanding & learning to use regular expressions. Regexes can be cryptic to say the least, but Friedl offers many examples, broken down into step-by-step instructions and explanations of how each regex works (in many cases, right down to the individual character level). He covers a variety of platforms and languages - the hardcore Perl enthusiast will enjoy this book greatly, but he offers fairly equal time to alternative languages like Java and the "grep" family. All that said, this book is an outstanding technical reference, pure and simple, for two reasons:- Friedl uses an interesting new typesetting convention to illustrate which sections of text are regular expressions, and which sections are not. It's hard to describe (and impossible to reproduce here) but they look like 90-degree braces at the upper-left and lower-right corners. This is a FANTASTIC approach and I for one would love to see this extended to other technical books.- Speaking of other things I would love to see extended to other technical books, THIS BOOK HAS ALMOST NO ERRORS! This is even more impressive considering the fact that, with regular expressions, screwing up EVEN A SINGLE CHARACTER is significant. Nothing [upsets]memore than spending $50-100 perfectly good dollars on a sloppy, error-laden, grammatically-challenged, poorly-edited, ill-reviewed and badly-structured book (which pretty much describes 90% of all the technical books out there). He made a few mistakes, the vast majority of which are extremely trivial in nature, and all of which were quickly posted to his website as errata. If only the other 90% of the technical authors out there were even half as diligent.All told, this book belongs on your bookshelf.

i wish all tech books were this good

Published by Thriftbooks.com User , 19 years ago
I can't say enough good things about this book. Regular expressions are such a powerful concept, but some of that power would be easy to miss if not guided correctly through the topic. Jeffrey Freidl does a great job of making a potentially very dry subject interesting, even while getting very involved in all the complexities that are inherent in such a powerful abstraction. He also does a good job of presenting both the general topic of regular expressions and the specific characteristics of the various tools available to process them.This is a book that you will come back to many times. I actually read it as a precursor to learning Perl several years ago. Then just recently I revisited it while taking a class on compiler construction and found that it still had useful insights for me. If you're a committed programmer, this book should be on your shelf. Also, the criticisms I've read in reviews here are pretty misguided. It is "chatty", because the author has a genuine enthusiasm for his subject. It is also not a "teach yourself regular expressions in 24 hours" kind of book. There are actually lots of cookbook style examples, but the main point of the book is to give you a solid enough understanding of the general topic that you don't need examples to craft your regexes. In this case, little patience as a reader will be much rewarded.

Published by Thriftbooks.com User , 19 years ago
Jeffrey Friedl's "Matering Regular Expressions" does a facinating job in taking you through the jungle (and I mean jungle) of RegExp.I am a Perl/CGI programmer, and I had considered myself good at RegExp even before I read this book. Most of the things I knew were from Programming Perl, 3rd edition (chapter 5, Pattern Matching). But I still decided to give Jeffrey a chance since I was having some trouble with my Parse::Syntax module, which is designed to parsing *any* programming language and highlighting the syntax accordingly (provided it has a syntax/grammer file written for the specific language). The accuracy of the parser (and more importantly the speed) does depend on well crafted regular expressions. As I started reading the book, I couldn't stop. I took it to my school's cafeteria with me and no one could make me leave untill I finished the whole book. I was excited. I was pleased! Here is the outline of tha chapters:Chapter 1 and 2 introduce you to regular expressions and give some basic regex examples. Mail utility and date matching is two of them. Chapter 3 mostly talks about conventions that all the regex tools follow and their differences.Chapter 4 deals with Traditional NFA, POSIX NFA and DFA regex engines and their pros and cons. What you'll like the most is the details provided by the author on each and every single example. He also uses a lot of step-by-step illustrations to take you deeper into the regex engine itself and see/feel how it works. He shows the point of backtrackings and provides awesome benchmarks. He uses such examples of matching a quote, allowing escaped quotes inside the pattern, matching C-style comments, IP addresses and many more. Chapter 5 deals with writing efficient regular expressions for NFA engines. It also re-vists some of the examples provided in the previous chapter and fine-tunes them. Chapter 6 and 7 deals with Tool-Language specific features of Regex engines. Chapter 6 is dedicated to Awk, Tcl and GNU Emacs, whereas chapter 7 is entirely dedicated to Perl, good over 100 pages of Perlism. It's true that there're features that Perl 5.6 offers when it comes to regex that didn't exist at the time this book went to press, (lookbehinds, for example). But this no way makes this book dated. Just take my word for it. Jeffrey put together a great masterpiece that will not die for many years, no matter how fast the technology tends to enhance Haven't read anything more exciting than this for many years.

Published by Thriftbooks.com User , 20 years ago
I got Mastering Regular Expressions in 1998 and I peek back regularly and it am proud to say is one of most used and useful books I own.Regular expressions are for everyone. They are simple to write and can be close to impossible to read and even unimaginably harder to understand. But reading comes after you can craft one.And this art of crafting RE is explained in astonishing detail and analysis in this book. Reader is carefully guided through basics, differences and common and uncommon pitfalls. Some of the parts are definitely not for the faint hearted! And this is especially true for parts that cover Perl RE. While main topic is Perl RE engine, a deep-enough travel through different RE dialects is made to help RE-crafting in almost any tool that supports REs.I've used the methods described in the book in tools as different as MS VC++, various editors, search engines and programming (Perl, PHP, C++, ...). The ability to use RE usually impressed people to the point they were sure I am using some incredible magic.But I must say that the most useful feature delivered in this book was ability to PARSE, UNDERSTAND and FIX a (slow, broken, strange acting) RE. This can be slowly absorbed by reader's (open) mind while carefully reading the book. The difference between meant/written can be as extreme as it can get in RE. I can (proudly) say I've been able to fix several complex REs, by simply (one could say blindly) following the rules laid in the book.My opinion is thath without this book real understanding of RE is almost impossible. I recommended it all of those who use programs that support (any form) of RE engine. It will help them solve some (hard) problems incredibly fast!
Copyright © 2020 Thriftbooks.com Terms of Use | Privacy Policy | Do Not Sell My Personal Information | Accessibility Statement
ThriftBooks® and the ThriftBooks® logo are registered trademarks of Thrift Books Global, LLC