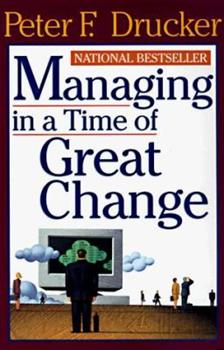 Managing in a Time of Great Change

This description may be from another edition of this product. For more than half a century, Peter F. Drucker's landmark essays have inspired and educated managers--and influenced the nature of business. Now, the learning continues with the Harvard Business Press...

Published by Thriftbooks.com User , 11 years ago
I am grateful to Harvard Business Press for publishing 25 of Peter Drucker's most important essays in a single volume in conjunction with celebrating the 100 anniversary of his birth. (He was born in 1909 and died just a few days before his 96th birthday in 2005.) Each of the essays originally appeared in the Harvard Business Review. As Drucker explains in the Preface, "All of the pieces - two interviews [of Drucker], one at the beginning and one at the end, and the twenty-five chapters in between, have one common theme, despite their apparent diversity. They all deal with [begin italics] changes that have already irreversibly happened. [end italics] They therefore deal with changes on which executives can - indeed must - take action. None of the pieces in this book attempt to predict the future. All deal with what executives can do - have to do - to make the future. It is not so very difficult to predict the future. It is only pointless...actions in the present are also the one and only way to [begin italics] make the future. [end italics] Executives are paid to execute - that is, to take effective action. That they can only do in contemplation of the present, and by exploiting the changes that have already happened...To enable today's executives to be ahead of this different tomorrow - indeed to make it their tomorrow - is the aim of the book." Consider "The Five Deadly Business Sins" (1993) within the context of the comments just quoted. Note in particular how practical Drucker is when reviewing various "avoidable mistakes that will harm the mightiest businesses." 1. The worship of high profit margins and of "premium pricing" that always creates a market for the competitor. "And high profit margins do not equal maximum profits." 2. Mispricing a new product by charging "what the market will bear." "This, too, creates risk-free opportunity for the competition." 3. Cost-driven pricing. "The only thing that works is price-driven costing." 4. Slaughtering tomorrow's opportunity on the altar of yesterday. Drucker cites the example of IBM that committed this sin at least twice, first when forbidding sales initiatives that could threaten the sales of punch cards and years later when preventing its PC people to contact mainframe customers. 5. Feeding problems and starving opportunities. "All one can get by `problem solving' is damage containment. Only opportunities produce results and growth." In other articles, Drucker focuses on major business challenges such as formulating a theory of business, planning for uncertainty, managing the family business, managing in the network society, creating an appropriate team, being "data literate" by knowing what to know, why measuring is more important than counting, coping with a major "power shift" within the U.S. economy, the meaning and significance of "a century of social transformation," why nonprofits must be strengthened, and balancing knowledge work with gender roles. Drucker's Preface is dated

Published by Thriftbooks.com User , 14 years ago
I was not quite sure what I would get from this book, since Peter F. Drucker is quoted so much by other managers (and many who are bad :) This book covered a macro & micro economic managerial view. Mr. Drucker thoroughly covers the full trend from agriculture, industrial, blue collar/white collar, all the way to the current knowledge worker trend. He states the truth about outsourcing (which in my opinion has been twisted out of context to what Mr. Drucker proposed as the approach companies should take). This book also covers the neoclassic conservatism and the US approach with this for further backing of capitalism. I was surprised to read that Mr. Drucker disagreed with some of the overly conservative view. And I get from the interview that he does value family and the values around family. I sure wish corporations would take his advice on that, rather than pick and choose what they hope will get them their next bonuse off of overworked people! I thought this book was awesome!! This is a book to read for full managerial and corporate trends! Very good book! Before you read someone like the unethical Jack Welch, pick up Peter F. Drucker and absorb real advice!

Great even if dated.

Published by Thriftbooks.com User , 18 years ago
Even dated there is something to be learned from this book. Drucker is one of the few people who not only talks about the future of business but clarifies the present business climate. Even when he is wrong about what will happen, which he will be one of the first to say, he is smart enough to admit it and learn from it. Drucker gives solid practical advice and insight to all aspects of business. And more importantly what should be part of business. I give the book a B+ on the StuPage just because of it being dated.

Published by Thriftbooks.com User , 19 years ago
Peter Drucker's greatest hits. That's the easiest way to describe this book, which compiles essays written by the ultimate management guru from 1991 to 1994. All of theses essays are about change: changes in the economy, society, business and in organizations in general. Drucker's advice on how managers should adjust to these tectonic shifts centers around the rise of the now ubiquitous knowledge worker and the global economy. As always, Drucker's analysis is far enough ahead of the curve that his 90s-era observations and conclusions are still relevant in the 21st century. We from getAbstract recommend this seamlessly organized book as the perfect introduction to one of the most important management thinkers of his generation.

The best scientific book on managing

Published by Thriftbooks.com User , 22 years ago
Peter F. Drucker 1995 book is the expected counter scientific answer for Managers in a Time of great change. To manage complexity properly in all fields we always have had the need of a good theory so that we can make not only predictions but also controling our changing environment. The Drucker`s theory of Business is based on a fundamental schema he also uses in the most original theory of society we have ever heard. Transcending the traditional dualistic paradigm of dividing society into two sectors, the Public sector or Goverment and the Private sector or Business, Drucker propose a threefold schema, which can be very useful among all in, in those countries in which "the social sector" is a political mean to maintain the control of people at any price. In this sense he is completely right when he says that there are not poor countries, but countries bad administrated. The most important thing with Drucker thought is that is consistent, precise and why not scientific. Today when change is a fashion word this book is a great aid for those leaders interested to take their organization into a new stage of mankind.
Copyright © 2020 Thriftbooks.com Terms of Use | Privacy Policy | Do Not Sell My Personal Information | Accessibility Statement
ThriftBooks® and the ThriftBooks® logo are registered trademarks of Thrift Books Global, LLC