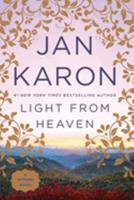 (Book #9 in the Mitford Years Series)

Father Tim takes on a new challenge in this inspirational installment in the beloved Mitford series by the #1 New York Times bestselling author of Bathed in Prayer. Father Tim Kavanagh has been asked to "come up higher" more than once. But he's never been asked to do the impossible--until now. The retired Episcopal priest takes on the revival of a mountain church that's been closed for forty years. Meanwhile, in Mitford, he's sent on a hunt for hidden...

Published by Brenda , 2 years ago
All of Jan Karon's books are great, the Mitford Series is just the best reading ever. I read a lot of hard books so it is a respite to escape to Mitford! Jan Karon's writing style is truly exceptional, it is easy relaxing reading but by no means empty boring stuff! It is engaging and gets to the heart, with laugh out loud funny to shedding a few tears. Lots of happy, and problems too, things that would happen in real life but dealt with by Father Tim's wisdom and kindness. These are great reads for everyone.

Published by Thriftbooks.com User , 16 years ago
I just finished another great read from one of my favorite authors, Jan Karon - her latest in the Mitford series, and probably the last. She says that in 2007 she will start a new series called "The Father Tim Novels." I have enjoyed each and every one of the books in this series, beginning with "At Home in Mitford" where you are introduced to Father Tim, an overweight Episcopal priest who is in his 50's and has never been married. Father Tim eventually does marry his lovely next-door neighbor Cynthia Kavenaugh, and this newest book takes Father Tim, now retired from active ministry, to new ground. This book titled "Light From Heaven" has Father Tim and his bride, Cynthia, "farm sitting" for their friends. He is asked by the bishop to become the interim vicar of a tiny Carolina mountain church called Holy Trinity that had been closed for 40 years. The way Jan Karon describes the beautiful sunrises and sunsets, the beauty of the valleys from the mountain tops certainly brings a lot of pleasure to me, and I hope to all who take the time to read this book. It points out that all of us can be as busy as Father Tim in going about our tasks, but still take the time to sit back and enjoy God's bounty and beauty. The characters that Jan weaves into her books are so very real. Just like the 82-year-old mountain man who still is a crack shot against squirrels for his stew pot, yet states proudly, "I hain't never put out m'eyes with readin' like some do. Nossir, I cain't read a lick, an' never wanted to." When I read this, I just couldn't believe that there might be somebody who might take this attitude about reading because I've been a book-lover all my life. But in order to understand others, you need to have someone point out a different perspective for you. Over the course of the Mitford series, there are several children that have been scattered as a result of a dysfunctional family life. In this book, Sammy comes to live with Father Tim and Cynthia, and becomes their gardener using his natural gift for growing things. At one point, Father Tim takes Sammy aside and reiterates some of the "rules for living" in their home. At the end of the discussion, Sammy states, "I hate this p-place!" Following this statement, Father Tim says to himself, "It was painful to do what was right" in teaching Sammy how to live properly. So many of us parents want to take the "easy" way in raising children and having them as your friends for life, yet sometimes we have to try to help them see what their actions are doing. And, yes, Father Tim, it definitely isn't easy! There is a beautiful cat called Violet who is Cynthia's inspiration for the children's books that she writes and illustrates, and for you dog lovers, all of the Mitford books have Father Tim's giant of a dog named Barnabas, who promptly stops whatever he might be doing if you quote scripture to him. As the book closes, Father Tim lies down in the far corner of the sheep paddock studyi

Published by Thriftbooks.com User , 17 years ago
I just completed both Light from Heaven, and the one selling with it. If you like Christian-fiction, Karon's books are must reads. Once again, Jan took me away from my world, to a place full of adventures, love, laughter, and tears. If you have not read anything from her before, I would suggest you start from the beginning of the series, and read them all. I don't think you'll be disappointed. In another realm (non-fiction), Passenger's Side was just wonderful. This is the kind of book that will surely be changing lives. It has given me help in some areas of my life where I needed it, and some renewed hope. I would also call it a must read.

A HEARTWARMING STORY WITH A MESSAGE OF HOPE

Published by Thriftbooks.com User , 17 years ago
Thanks to Jan Karon, Mitford has become a literary heart's home for many. And, thanks to John McDonough, Father Timothy Kavanaugh has become very real, a voice both rugged and kind, only slightly accented, appropriately rich and mature. One can imagine him delivering a homily to a rapt congregation. In this, the final installment in the highly popular series, we find Father Tim and his wife, Cynthia, doing a favor for friends. They're house sitting on a farm where, as the beloved cleric says, There's naught to do but "read, rest, and walk four dogs." Cynthia asks him to go into town to pick up supplies for their son's visit. While he's happy to do so, he also ruefully acknowledges that he might wish to be called upon to do something a bit more interesting. His wish is granted when the Bishop assigns him to Holy Trinity, a small church in the mountains that hasn't had a viable congregation in four decades. Father Tim and Cynthia arrive with little hope of finding very much in the way of a structure, but are delighted to find that Holy Trinity has been well maintained by loving congregants. Light From Heaven is the story of how Father Tim and Cynthia become acquainted with the people who live in the mountains and try to build a congregation. Throughout, listeners are treated to visits from characters met in previous installments, and enchanted by the Kavanaugh's new friends. Once again, Jan Karon has penned an entertaining, heartwarming story carrying a message of hope. - Gail Cooke

The Father Gathers the Family; Moving On

Published by Thriftbooks.com User , 17 years ago
Saliently Ms. Karon summarizes the series and this final installment in the Mitford series: the Father gathers the family; then moves on. Weaving with her demonstrated skill at keeping multiple storylines going and keeping the reader's interest perked (or not all it seems from some of the reviewers with this finale) she marvelously weaves her magic through tales of ordinary folks on a mountain wrapped with Mitford folks we've come to know and love over the series. From runaway kids of dysfunctional homes to lead poisoning to hidden money to a chicken thief. Notably, however, this offering has more Scripture, more witness to the faith than the others. Thus, easily this reviewer's esteem and enjoyment following the reopened spiritual outpost. The interspersing of hymns and prayers and emails show that faith of old still functioning even in age of technology. What marvelous seaming together of the wonder of it all! Especially touching is ASL signing with Clarence and small congregation's learning to communicate with this neglected language group. What begins in the spring seems so encouraging to a book introduced as chill of fall turns to winter approaches, renewing one's longing for it. Ending as it does with a June scene and paths yet untrod ahead for our Father Timothy and Cynthia, seems the perfect jumpoff for what is to come from our beloved wordsmith Karon. Can't wait for Fr.T series, but now relishing this wonderful finale read!

It's Here...and It's Fabulous

Published by Thriftbooks.com User , 17 years ago
We waited a long time for Light From Heaven, but now that it's here, we know it was worth the wait. A fun and feel-good novel, Karon has given us just what we asked for. As we reaquaint ourselves with the residents of the North Carolina town of Mitford, we find that Father Tim is called away to bring life to a tiny in size (but big in spirit) mountain church. Even though this is the end of a series, we are introduced to just a few more interesting and entertaining folks--the parishioners of Holy Trinity church. Like every Mitford novel, Light From Heaven is not overbearingly religious, but it does always pay respect and paint a beautiful picture of the special feeling that is Faith. By ministering this new group of churh-goers--unlike any the pastor has seen before--Father Tim inevitably finds himself closer to nature (and heaven) because of the people he meets, and the events that occur at this small and simply vibrant vocation. It should also be mentioned that, like the rest of the series, scrumptuous southern cooking plays a big role in the interaction of the characters. (I was interested to learn that Karon also recently published a cookbook.) So, as we say goodbye, we are pleased to find that Light From Heaven does an excellent job at answering many of the questions we had after reading the previous eight books. It also acts as a transition book for Father Tim and his wife, as "The Father Tim Novels" are set to be published in 2007. Newcomers to the series should consider picking up the Mitford Series boxset, as it wouldn't be fair to start at the ending, and the whole series really is exceptional. Fans might also enjoy the Left Behind Series by Lehaye and Jenkins. It has many similar morality themes and religious references. A book titled Calling in the Night by Michele Geraldi fits right into this style, too, as it is eloquent and respectful to faith and beauty. (I believe it is the first in a series, so it is fun to be at the beginning of something new.) Goodbye, Mitford. It's been wonderful.
Trustpilot
Copyright © 2022 Thriftbooks.com Terms of Use | Privacy Policy | Do Not Sell My Personal Information | Cookie Preferences | Accessibility Statement
ThriftBooks® and the ThriftBooks® logo are registered trademarks of Thrift Books Global, LLC