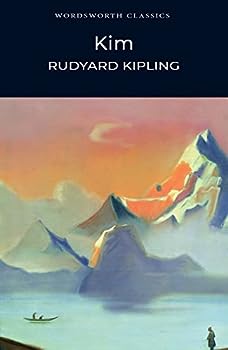 With a new Introduction by Cedric Watts, Research Professor of English, University of Sussex. Kim is Rudyard Kipling's finest work. Now controversial, this novel is a memorably vivid evocation of the... This description may be from another edition of this product.

Published by Thriftbooks.com User , 14 years ago
Kim is to me the epitome of the intelligent adventure story. Written in the somewhat lofty style of the Victorian era, it will make some demands on your concentration. This is not an action-adventure type tale on the order of the Tarzan stories of Burroughs, but a true work of literature where the action is as much cerebral as it is physical. Though the title character,Kim, is a boy, this is by no means juvenile fiction. Kim is an extremely intelligent little street urchin whose deeper character has not yet become set. He has the potential to achieve excellence in many different fields, and on the streets he has already been exposed to many of the evil possibilities. His encounter with his long-lost European heritage opens up a vastly larger arena of opportunity for a youngster of his capabilities. Another influence for which he develops a deep-seated devotion is the noble, ethereal Tibetan "holy one" whose purity of spirit inspires Kim to be his "chela", or disciple. Except for his association with the Teshoo Lama, Kim is not offered anything for free. His other associates, even the British, are interested in Kim only in so far as he is useful to them in their "Great Game"; that is, the swirl of intrigue involving espionage and counter-espionage as the imperial powers pursue their designs on that part of Asia. Kim knows the world is indifferent to his fate, but he is happy to partake of the great game not only of the British, but of life itself, with only his own ingenuity, bravery, and gift of gaining the friendship of wise teachers, to sustain him in an environment full of sinister possibilities. Kipling has given us a picture of India and its peoples of that time that is richly colorful and could only have come from one who had keenly observed them first-hand. It is a deeply satisfying adventure story with strong spiritual overtones. The respect and reverence shown for the cultures and religions of the East are a backdrop to all the other ingredients that make this a masterpiece.

Published by Thriftbooks.com User , 14 years ago
This was Kipling's only full-length novel. For it he was reviled, during his lifetime, both as an imperialist and as an Indian-independence sympathizer. In truth, the novel reflects Kipling's own experience - first as child abandoned by his parents while they went to India, then as a treasured child upon whom all the love and attention of the Indian Ayahs (nannies) was showered, when his parents returned and took him to India to live. Actually, there are three aspects or themes of the story, reflecting the different phases of Kipling's life in India: first, as an army orphan, abandoned by those who were set to watch over him; second, as a participant inducted into the "Great Game" - the unseen, silent war of espionage between the British and the 19th century Russian Empire; third, as a spiritual journey as the boy, Kim, becoming a man, follows a Tibetan monk in search of a river that cleanses the soul. The way in which Kipling weaves these three themes together is quite unparalleled in modern literature. There are points where the writing verges on sublime. Also, in the context of the two recent conflicts in Afghanistan, the story contains much pertinent historical context. I know of no other novel quite like it.

Published by Thriftbooks.com User , 16 years ago
This is one of those books that, even if you read then at an early age, you'll always remember with tenderness. It has adventure, fun, suspense; it makes you think about life and people in different parts of the world. When I first read it - I was sixteen - I wanted to go to India and see all those places and villages. I read it until today with the same pleasure.

Published by Thriftbooks.com User , 16 years ago
Kipling's tale has been compared to Huckleberry Finn since it is a story about boyish adventures with an older man of a different race. Most of the story's characters have mildly hostile criticisms against other people different from themselves. The characters vacillate between hostility and friendliness. Usually, these criticisms are put in a humorous context. Kipling seems to accept it all with a grin as if to say "Oh well, that's how people are. They do enjoy their prejudices". There is no discomfort or condemnation of what the characters think of others. The judgments can be against someone's religion, caste, race, or sex. But as far as religion goes, the characters seem to think that someone of different religion is a surprisely decent person, even though they are following a religion that will send them straight to hell. The characters are all distinctive and the closeness between the Lama and Kim is presented in a convincing, moving way. I really got the sense of wonder that Kim felt as a boy on the road for the first time and how he joyfully looked upon the new sights. Kim grows up by having many mentors since he is an orphan. He is also seen as a good candidate to be a spy for the British government since he can move so easily between the world of the British Sahibs and the Indian natives they rule over. The author mentions that most Sahibs would not like to be among the natives so closely, but it all comes so naturally to Kim who considers himself halfway a native. In fact, he struggles with his identity. Is he to take on this new identity as a white sahib or will he remain a white totally assimilated into Indian culture? But this identity crisis also helps him become a spy because he can easily wear different masks, acting a part for any occasion. The other part of the story is the quest for the river which will give the lama enlightenment and how Kim, as his chela, helps the lama on his quest. This is the Hindu theme of freeing yourself from desire, lust, and anger. Kim does not really become like the Lama in pursuing this religion. But the Lama does warn Kim to act to acquire merit or don't act at all. Whether Kim acquires merit in the great game of spying is questionable since the game itself requires you to be a shady character who serves the interests of the government with its ambiguous reputation. Kim manipulates the lama to move in his direction during their journeys, just as the British government manipulates Kim into working for them. I can't say the relationships are entirely pure.
Trustpilot
Copyright © 2022 Thriftbooks.com Terms of Use | Privacy Policy | Do Not Sell My Personal Information | Cookie Preferences | Accessibility Statement
ThriftBooks® and the ThriftBooks® logo are registered trademarks of Thrift Books Global, LLC