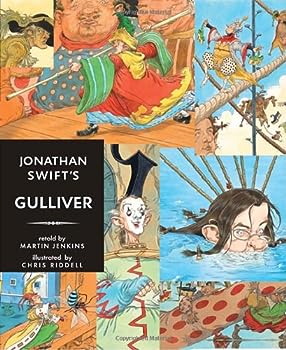 This description may be from another edition of this product. A tour de force of illustration and design, JONATHAN SWIFT'S GULLIVER is a magnificent introduction to one of the most popular stories in the English language. First published in 1726, Jonathan...

A new spin on a beloved old title.

Published by Thriftbooks.com User , 14 years ago
AS a grandmother, I often feel a sense of dismay at the lack of exposure modern day children are being afforded of the classics of literature. Books like this one with wild illustrations designed to grab the eye of the reader and keep it with a text more understandable to the twenty first century child are a gift to be shared. This is a book that will attract readers. I can't think of anything more important. With vocabularies being drawn from television, movies and video games that often fall very short of expressive ideals, it is so nice to see some one tackle Swift and make him palatable to young readers. Anyone up for Dickens, Kipling and Stevenson? What about good old Mark Twain? Kudos to Jenkins and Riddell. My soon to be six year old grandson will love this book. I consider it my job to make sure he keeps getting treasures like this one.

Adventures of a Misanthrope

Published by Thriftbooks.com User , 15 years ago
Gulliver's adventures to imaginary lands are used to illustrate the foibles and pettiness of mankind. In his first adventure, he finds that the tiny Lilliputians are forever at war with their island neighbors over how to crack open an egg, and they are therefore suspicious and manipulative. By contrast, the giants of Brobdingnag live by "common sense, reason, justice and fair play," but Gulliver is often in danger by being so tiny in their country. In other lands, Gulliver meets all kinds of characters - constant worriers, crazed inventors, preposterous rulers, and some chatty ghosts who give him a history lesson. With each adventure, Gulliver becomes increasingly aware that the beliefs he holds about mankind's achievements may be the opposite of what he had thought. Finally, he meets the horse-like Houyhnhnms (sounds like a horse neighing), "noble creatures ruled entirely by reason," who have no idea of evil. Their country is also inhabited by Yahoos, wild animal-like humans without any redeeming qualities, who steal from each other and squabble endlessly. Gulliver is so taken by the civilized, virtuous Houyhnhnms that he would like to live happily ever after with them, but they can't get over the fact that he really must be a Yahoo, who will only encourage the other Yahoos to revolt against them. He is cast adrift in a small boat and eventually finds himself back in England, where he has to get used to lying, deceit, self-importance, and greed once more. Some of the story elements are a little disturbing, such as his attitudes towards the servant classes, and some of the outrageous behaviors of certain characters verge on disgusting, but this is always used to make a point. Overall, this is a beautifully-made book with much food for thought, for both young and old alike.

Published by Thriftbooks.com User , 15 years ago
This is really a beautiful book. The illustrations are quirky and captivating and the language, while not antiquated, still reads like a classic. I sat reading it to my 7 year old son in the bookstore for a good 15 minutes before realizing we just had to take it home. Originally a story which my son would have had to wait until at least junior high to read, this version sits up on the shelf next to Doctor Dolittle, Peter Pan, Alice in Wonderland etc. The fantasy is emphasized but the political satire is gently present for those old enough to appreciate it.

A PRAISEWORTHY RETELLING OF GULLIVER

Published by Thriftbooks.com User , 16 years ago
When most of us hear the name "Gulliver," a picture probably comes to mind. A giant. A strong, brawny fellow? Leave it to consummate illustrator Chris Riddell to give us a smile provoking Gulliver with knobby knees, a bump in his nose, and shirt askew. Gulliver is still prone to many adventures, just as Jonathan Swift intended when he wrote "Gulliver's Travels," but he's also a tad clumsy with a tendency to wind up in comical positions. There he is in Lilliput on the first of his voyages skewered into the sand by all those little people. In this double-page full-color spread every bony finger is pinioned, his waistcoat is tacked to the ground, and one big toe pops through a hole in his sock. Next, we find tiny spear bearing soldiers marching across the length of his body. Consider Gulliver's voyage to Laputa, Balnibarbi, Luggnagg, Glubbdubrib, and Japan. If you recall, the ship he was aboard is taken over by not one but two pirate ships. Such ferocious buccaneers you've never seen. Thankfully the Dutch pirate captain showed our hero a little sympathy, and we find him tucked into a small canoe and set afloat. Each of Riddell's illustrations is a gem, and will surely be enjoyed over and over again. He is a political cartoonist for the Observer, thus the perfect choice to bring Swift's political satire to life. Martin Jenkins has done a yeoman's job of retelling this classic. His adaptation is true to Swift's original story yet it is more easily understood by young readers. While this Gulliver will hold appeal for all ages, it is certainly a choice introduction to what is considered to be one of the finest stories ever written. Kudos to both Martin Jenkins and Chris Riddell with, of course, a deep bow to the memory of the incomparable Jonathan Swift - Gail Cooke
Copyright © 2020 Thriftbooks.com Terms of Use | Privacy Policy | Do Not Sell My Personal Information | Accessibility Statement
ThriftBooks® and the ThriftBooks® logo are registered trademarks of Thrift Books Global, LLC