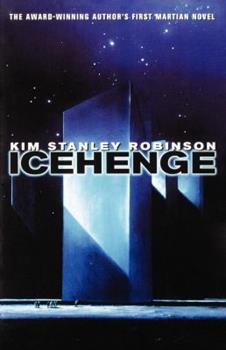 An early novel from Science Fiction legend Kim Stanley Robinson, now available for the first time in decades: Icehenge . On the North Pole of Pluto there stands an enigma: a huge circle of standing blocks of ice, built on the pattern of Earth's Stonehenge--but ten times the size, standing alone at the farthest reaches of the Solar System. What is it? Who came there to build it? The secret lies, perhaps, in the chaotic decades of the Martian Revolution,...

Published by Thriftbooks.com User , 18 years ago
This is a fantastic book by an excellent author. Icehenge gives you the journals of three individuals all somehow connected with a mysterious monolith on Pluto. This is a suspenceful story that keeps you asking "Who built Icehenge?" to the very last page.

History of the Future (an oft-used, but appropriate phrase)

Published by Thriftbooks.com User , 19 years ago
The central premise of this book is that even though a vastly extended lifespan may be possible in the future, a person's ability to remember past events may be limited to those events that have taken place within the last century. The book is all about archaeology, both in the traditional excavative sense and in the discovery of memories hidden deep in the minds of the characters. In this future where everyone lives a long enough life to write an auto-biography, the novel is appropriatly split into three such accounts from different time periods, although it is not ever made clear whether the accounts are true or works of fiction within the novel itself. To it's credit, the novel never really resolves these issues; the sources are presented as simple evidence without comment, and it is up to the reader to draw their own conclusions, should they wish. Capable of being read as either a simple who-dunnit, or as a serious piece of fiction with well-developed characters and interesting concepts, this novel deserves to be a classic. Good science fiction should present a future that seems plausible, in Icehenge it is hard not to believe that you are reading about a past that has already taken place, although not necessarily as the accounts describe.

Great out of the starting gate

Published by Thriftbooks.com User , 19 years ago
Kim Stanley Robinson debuted with this book and The Wild Shore practically in the same year, something that doesn't happen too often. Even rarer, it turns out that both book are key works of the authors and deserved to be read years after they were first published. The Wild Shore gets most of the glory because it's slightly better and part of a trilogy (all three of which are highly recommended) and also because it's less "SFish" than Icehenge. Icehenge has a similar structure as Asimov's The Gods Themselves in that the book is made of three distinct pieces with three distinct characters who all further the plot without ever meeting . . . sort of. There is some crossing of stories here, but not directly, but Robinson's charactizations are what shine through. All of the parts are written in the first person and each character has an individual voice, uniquely showing different views of a future society where life is good but not great, where you can live for hundreds of years but forget about the place where you were born. The plot partially concerns some monoliths (shades of 2001!) being found on Pluto, with the pervading theory that they were built by humans . . . the only question is by who and why. The first story sets up everything else and might give clues into what happened but the other two sections are what deal with the formations proper. The first guy has one theory, his great-grandson years later has a totally different one and both go about proving them. In the end though it's impossible to say and this is a book that will have you considering a lot of aspects of the plot long after you've put it done. Robinson didn't take the easy way out and give a neatly pat ending, which some readers may not be too fond of. But considering the themes of the book, of memory loss and forgetting the past, it fits in perfectly. It's not his best book but if you've enjoyed anything else he's written there's no reason why you shouldn't give this a shot.

Published by Thriftbooks.com User , 20 years ago
"Icehenge" is a great science fiction novel at a number of levels. On the surface it is a something of a mystery, namely, who put those ice megaliths on Pluto? Robinson maintains the air of suspense right up to the book's end (and beyond, depending on how you look at it). Perhaps the most interesting aspects of "Icehenge" are some of the underlying themes Robinson incorporates into his narrative. One is the concept of virtual immortality, as the people in the novel's future world have life spans of up to a thousand years. Robinson explores some of the possible downsides to such a medical feat, such as extensive memory loss (most of the novel's older characters cannot recall their own childhood) and deep, debilitating depressions (`funks') induced by a feeling that life lacks purpose - not hard to believe if you can imagine yourself living for 500 or so years with another 500 to come. Additionally, Robinson speculates on the nature of history and acheology as forms of scholarship. Using the novel's debate about the origin of the Icehenge monument on Pluto, he notes how something as apparently straightforward as the exploration of past events can be subject to massive debates and controversy, as events and facts are reinterpreted, new evidence is found and accepted beliefs are turned on their head - with all of the ensuing social and political implications. As such, "Icehenge" is a great metaphor for our own day and age. The only criticism I would have is that writing this novel in the early 1980s, Robinson too confidently projected some of the realities of his own time into his imagined future. Thus, there is the now odd reference to the Soviet fleet and Soviet colonies on Mars. If you can get past this, "Icehenge" is a very enjoyable and intriguing book.

Published by Thriftbooks.com User , 22 years ago
Icehenge was an extremely enjoyable mystery. The use of three strong characters telling the story from their individual perspectives over the ages was refreshing and innovative. While much different from the later Mars Series, it gives the reader an exciting journey into the discovery of our solar system (and beyond).
Copyright © 2020 Thriftbooks.com Terms of Use | Privacy Policy | Do Not Sell My Personal Information | Accessibility Statement
ThriftBooks® and the ThriftBooks® logo are registered trademarks of Thrift Books Global, LLC