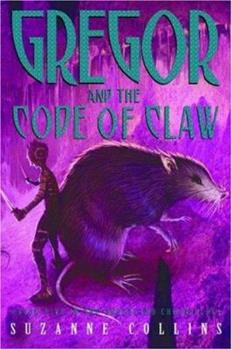 Gregor and the Code of Claw

(Book #5 in the Underland Chronicles Series)

Everyone in the Underland has been taking great pains to keep the new prophecy, The Prophecy of Time, from Gregor. Gregor knew from the beginning that it must say something awful, but he never imagined just how awful: The prophecy calls for the warrior's death. The warrior, of course, being Gregor. Now, with an army of rats approaching, and Gregor's mom and his sister still in Regalia, Gregor must gather up his courage in the face of this terrifying...

Phenomenal is an Understatement

Published by Thriftbooks.com User , 15 years ago
There are many writers who've been writing fantasy drected towards young adults nine and over, but no one--save J. K. Rowling--does so as masterfully as Suzanna Collins. In no other fantasy series currently being published (not Charlie Bone, Septimus Heap, Pendragon, Artemis Fowl, etc) can one find such a deep and satisfying story arc as the tale of The Underland Chronicles. That being said, "The Code of Claw" is the best of the series. To call it a fitting conclusion would be an understatement, because it is literally shocking how prose that seems simple actually tells a tale strewn with complex emotions with more twists and turns than an episode of "24." Every chapter makes the reader want to read "just one more" until there is nothing left to read, because it was all hungrily digested. Collins' graphic depiction of the war going on in the Underland automatically takes her out of the category of those writers who talk down to young readers. But it is her attractive, yet flawed, characters who make this book what it is. The early parts of the book lack the action of the first four, but I am inclined to say that it is for the best. The moments of conversation and preparation for the climax of the war and the book were among the most poignant I've read. How could you not love Ripred, Gregor, Boots, Luxa, Ares, Temp, Vikus, and so many, many more? I'm just glad that Collins took the time to let relationships develop, and gave each of them a fitting send-off at the end of the book. One thing I must urge all you readers to do is to not pick up "The Code of Claw" thinking it can be read as a standalone. An understanding of the events of the first four books is required to appreciate this book for what it's worth, and that's a lot. And, forewarning, this book is not only the best of the series, it's also the most heartbreaking. In conclusion, I leave you with the first line in my review of the first book in this series: "It takes a good author to make the whole "animals can talk" plot line to be interesting." And Collins pulls it off, with the grace of a master. Kudos. 10/10 Classic

I love the Underland Chronicles!

Published by Thriftbooks.com User , 15 years ago
The Underland Chronicles. The books are one of my favorite series. I have read all of them and I'm obsessed. Once you start reading, you can't stop. The action, the suspense, and everything else is put together to make a wonderful book. The series is about an 11/12 year old boy who falls into an underground land. He is imediately recognized as 'the warrior' in a few prophecies made by the founder of the main city in the Underland, and goes on journeys to fulfill them. On the way, he meets giant bats, rats, cockroaches, mice, lizards, ants, and moles. Some of the animals are friends, some foes, and some are in between. If you haven't read this series you should do so NOW because they are the best series (after Harry Potter, of course) that I have ever read. Fly you high!

All earthly things must end -- but why so soon?

Published by Thriftbooks.com User , 15 years ago
Wow. There isn't much else to say after finishing this book, other than, "Why can't there be any more?" For all the fans of the Underland Chronicles: realize that if you thought this book would help wrap things up in a way that left you satisfied with just five books, you shall be very disappointed. Sure, things are wrapped up, but the ending is sad. Heartbreakingly. I don't even just mean the deaths, almost-deaths, and debilitating illnesses that happen to characters we've known and loved since they stole our hearts in book one -- though certainly there are enough of them. Just the sadness of leaving this behind is awful enough. Never since Lord of the Rings have I been so miserable to leave a world behind. While many people agree that certain parts, particularly a certain romance brewing since book 3, were not wrapped up nearly to their liking (and I agree! Wholeheartedly!) I also think that there is definite room for imagining here. Better yet, why not write a sequel, Ms. Collins? There are plenty of discussion threads on this page to give you ideas. Loss is a key theme in this book, almost as key as the theme of War -- right or wrong? Gregor experiences loss of a kind he has never imagined. Sure, there were deaths before, but apart from a few he has never experienced agonizing, why-do-I-get-up-in-the-morning pain. And in this book he gets far more than his share of it. Despite the fact that this book doesn't end happily, (the Underlanders' farewells were much too short for me) it has given us our share of good memories. How many books will ever make us feel affection for a roach or a mouse or a giant, sarcastic talking rat, for heavens' sake? How many times have we found ourselves thinking about ways the Underland could actually exist? Who can forget Ares saving Gregor in book one, Gregor's first prophecy, the ever-misleading Prophecy of Bane, Luxa's Coiler to escape from the spinners, Hamnet's relationship with Solovet, the cutters destroying the starshade and all hope being lost before Temp thought to say, "Not the cradle, unless this be, not the cradle," Hades Hall, the killing of the nibblers, Luxa and Gregor falling in love, and pretty much every single one of Ripred's lines -- who can forget how much pleasure, bittersweet as it sometimes was, that we all got from these books? So, even if you were disappointed with Code of Claw, read it again. You might find that, despite the disheartening end, there are just as many reasons to love it as the previous books. Rating: Masterpiece

Published by Thriftbooks.com User , 15 years ago
/I / I/ \ \ . II\ I// \ / . /I II/ \ . I/ \ I// II\\ / \ . Ha! Got you there, haven't I? The title of this review is written in the Code of Claw*, so you'll have to read the book and then listen for my scratching, scratching, scratching and the tapping, tapping, tapping, but I warn you - TIME IS RUNNING OUT!!!! The fifth and final installment in the Underland Chronicles brings everything together in epic scale, as foretold by The Prophecy of Time. This prophecy contains two lines that everybody has been hiding from Gregor, the twelve year old New Yorker now known as the Warrior. WHEN THE MONSTER'S BLOOD IS SPILLED, WHEN THE WARRIOR HAS BEEN KILLED As you can see, a grim fate awaits our hero - or does it? As readers of the series will know by now, the prophecies of Bartholomew of Sandwich are sometimes open to many interpretations, but as this one seems pretty cut and dried, Gregor has to make the decision to stay in the Underland, or return to the relative safety of the Overland. Several factors limit his options, and this would have been a very short book had he chosen to flee, but things get even more complicated with the arrival of another member of the family down below, bearing bad tidings of those above. Meanwhile, the Gnawers have joined forces with a long forgotten group of Underland creatures, and spurred on by the insane Bane, they have launched an all out war against Regalia. An alliance has been formed between the Humans, Fliers, Crawlers, and Nibblers, with a little help from the neutral Spinners, but the key to their survival lies in breaking the Code of Claw, which the Gnawers are using to transmit information. Be warned that lots of blood and other fluids are shed in this final episode, but there are also lots of surprises, both pleasant and unpleasant, that neatly wrap everything up by the closing chapters. The ending may or may not be what you've been hoping for, but there's no doubt that The Underland Chronicles is one of the most imaginative and ground breaking series available in current children's fiction. You'll need to read the first four books before tackling this one, but at least now you can read them one after the other and not have to wait like those of us who have avidly followed the series from book one. Highly recommended for young readers, and those who are young at heart. Amanda Richards, May 1, 2007 *The simplified version straight from the Tree of Transmission

Published by Thriftbooks.com User , 15 years ago
I absolutely LOVE THIS BOOK!!!!!! I love this series and this is the best book in the series! Continuing the ending from Gregor and the Marks of Secret, Gregor reads The Prophcy of Time, and learns of his death. From then, Gregor is trained to battle the Bane. Along the way, Gregor learns tht his mom is slowly recovering. Also, the Code of Claw, a code that enlists a team of different animals to crack it. And an unexpected visitor joins Gregor, Ripred, Howard, and Luxa for this final war. But when the code is figured out, and the war begins, not everyone will survive. In all, Gregor and the Code Of Claw is a winner! I loved to read about Gregor and Luxa's relationship progress in the most satisfying way. Every chapter left me on the edge of my seat, and I got teary-eyed when I read of the characters killed off. I was really sad that this was the final installment of the series, but the ending was amazing! Suzanne Collins is my favorite author, and I love her writing! I think she should do a spin-off series, like what happened in the Underland after Gregor left. But I recommend this book to anyone, young or old, who enjoys reading. An excellent book! I
Trustpilot
Copyright © 2022 Thriftbooks.com Terms of Use | Privacy Policy | Do Not Sell or Share My Personal Information | Accessibility Statement
ThriftBooks® and the ThriftBooks® logo are registered trademarks of Thrift Books Global, LLC