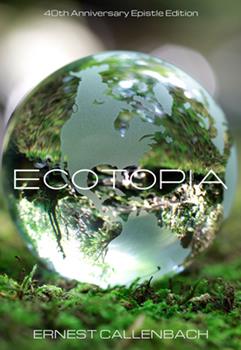 Looking at the other side!

Published by Thriftbooks.com User , 17 years ago
I loved reading Ecotopia for my Government class. This book is really easy to understand. The author goes into great detail. For those of you who do like exploring new things this book is for you. It is possible to have a world like Ecotopia, that's whats so appealing. I recomend this to everyone. Open your mind explore something new and don't be afraid.

Ecotopia - worth thinking about

Published by Thriftbooks.com User , 18 years ago
I read this book in the early 90's while living in Corvalis, Oregon. At that time you could see and experience bits and peices of "Ecotopia" at Nearly Normal's restaurant, The Beanery, and New Morning Bakery. Callenbach takes communal eco-feminist ideas and extends them to imagine a new society based on them. I do not think I would like to live in Ecotopia. Parts of it appeal to me, parts of it don't. But it was well worth the visit. Ten years later I still think about this book, and recommend it. If you are an ideological literalist, don't go there. You won't like it. If you want to explore the consequences of ideas and values, you will find Ecotopia a useful place to think about the world as it is and the world as it could be.

Published by Thriftbooks.com User , 20 years ago
"Ecotopia" comprises the futuristic musings of Mr. Callenbach, who has compiled a "1984" for the late 20th century through visions of a positive utopia, albeit one that could only exist outside the borders of the United States. Unlike Orwell or Huxley, however, Callenbach prsents the fictitious nation of "Ecotopia" outside the political and technoloical sphere of the rest of the world- as an isolated geopolitical entity. This is interesting considering the book's emergance 20 years prior to the current "globalisation" conflict gripping the world that pits the global conformity thought to be a future theme by Orwell and Huxley aainst the virtues of th small nation-state. Callenbach presents Ecotopia as a model of small-nation efficiency and cohesiveness. Although the premises of Ecotopia's emergence as an independent state are somewhat suspicious, they are irrelevant to the overall message of the book.That said, the book is throughlly well-executed, presenting the new nation as seen through the eys of an American reporter, significant due to the belligerant status employed between the two nations at the current period. Will Weston, the novel's "hero", not only studies Ecotopian culture but becomes overtaken and intertwined in its decadence. The interspertion of Weston's personal thoughts and his articles sent back to New York are interesting and present the contrastin views of Weston the "journalist" versus Weston the "man".Ecotopia itself is the realisation of an almost utopic society for many environmentalists, urbanists, and socialists. One will have to dive into the actual work to discover its intricacies, but I will divulge that Callenbach does not present the nation as a complete paradise and carefully balances the American perspective with Ecotopian attitudes. I thoroughlly recommend this not only beautiful work of fiction, but excellent commentary on our social and environmental future.

Originally a news report about sewage....

Published by Thriftbooks.com User , 21 years ago
This book has a fascinating history. Originally written as a news essay about the places to dispose sewage, it became one of the few viable utopian novels written since 1984 and Brave New World -- genuinely utopian, rather than anti-utopian. Of course, it's really about moving to Northern California in the 1970s, or Northern California as the Northern Californians hoped it would become. The internal combustion engine is outlawed, and babbling brooks flow down San Francisco's Market Street. Ecotopia's most engaging quality is the portrait that Callenbach provides of the golden young people of the counterculture, living the informal, thumb-your-nose- at-authority-but- build-a-world-together spirit that American culture had beaten down. (The spirit is mostly gone, but the novel remains.) Interestingly, Callenbach was a former Organizational Development consultant, and the corporations described in Ecotopia -- collaborative enterprises owned by the participants -- are not that different from the dot-coms of today.

Living in harmony with ourselves and the planet

Published by Thriftbooks.com User , 22 years ago
Ecotopia tells the tale of a new nation - the area that is currently Washington, Oregon, and northern California - and how the people there live, viewed through the eyes of a reporter from the U.S.One strong thread, as one would expect from the title, is the nation's orientation toward living lightly on the land - private cars are outlawed, only fully recyclable plastics are permitted, and so on. As such, it's a manifesto for the "small is beautiful" movement.But even more interesting is the way that Ecotopian society has restructured social relationships. People live and work together in various types of small communities, providing a tribal form of companionship missing from our modern world. They have also found a freedom of emotional and physical expression that we lack. So it's even more of a must-read for anyone interested in the new community movement.
Copyright © 2020 Thriftbooks.com Terms of Use | Privacy Policy | Do Not Sell My Personal Information | Accessibility Statement
ThriftBooks® and the ThriftBooks® logo are registered trademarks of Thrift Books Global, LLC