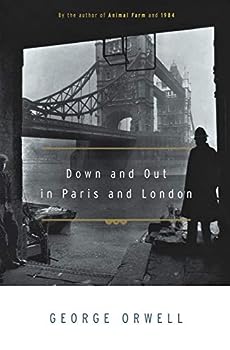 Down and Out in Paris and London

This description may be from another edition of this product. Written when Orwell was a struggling writer in his twenties, it documents his 'first contact with poverty'. Here, he painstakingly documents a world of unrelenting drudgery and squalor - sleeping in...

Down and Out in Paris and London is a good book

Published by Elaine Carlson , 2 years ago
I just started reading this and I started laughing at the first paragraph. I now really want to read more.

"The thought of not being poor made me very patriotic..."

Published by Thriftbooks.com User , 15 years ago
DOWN AND OUT IN PARIS AND LONDON shows the dark seedy side of one of the two most cosmopolitan cities in Europe and England. There is no glamour in George Orwell's depiction, but rather a taste of the raw and real side of poverty that occupies the lives of the lower and working class citizens and immigrants that sought opportunity in Paris and in London. Surprisingly, these were educated and former civil servants of their respective countries who happened to meet unfortunate circumstances, such as falling to illness or dropping out of society. Orwell observes that poverty does not discriminate. Indeed, this is an autobiographical account of how Orwell lived as a struggling writer during the 1920s and 1930s where he literally lived a life that may have compared to a Dickensian novel, but with a little more wit and subtle cynicism. The life in the city and the unpredictable events that occur while scrounging for something to eat or scrimping by with few a shillings or francs in order to survive. Orwell succeeds in blending humor and irony in situations that usually do not accompany undesirable situations. Orwell presents an array of characters with great vividness. Through the art of fiction, Orwell writes in the first-person and accounts the people and places he encountered. Of all the characters mentioned, Boris and Bozo were the most memorable. In Paris, Boris, a roommate, fellow vagrant and writer, former Captain in the Russian Army before the Bolshevik Revolution, who was well read with military history -- Napoleon to Clausewitz, worked odd jobs as a waiter or maitre d' hotel at various Parisian hotel restaurants. On the outskirts of London, Orwell saw a contrasting side of poverty that appeared harsher than what he had been accustomed to in Paris. And as in Paris, Orwell came upon unusual and enlightened people, such as Bozo, a pavement artist who drew likenesses of Winston Churchill and cartoons of political parties. He was the son of a bankrupt bookseller who spoke so so French and read Zola and Shakespeare, and was considered the quintessential beggar who spent his earnings on drink. Overall, DOWN AND OUT IN PARIS AND IN LONDON will entertain and entice readers. George Orwell offers reader a unique and realistic view of living on the fringes, but deeply empathizes and attempts to understand each predicament of the people and places he encounters.

Fascinating look at the "down and out" of the early 20th c.

Published by Thriftbooks.com User , 17 years ago
This book reads much more like a memoir than the novel it is, and indeed it is a largely autobiographical work. Orwell begins with an anonymous narrator describing daily life in the poorer parts of Paris during the early 1900s. He describes the din, the dirt, the bugs, and all else in vivid detail. The narrator, an Englishman by birth, is living in Paris and running low on funds. We follow him through various attempts to earn money, including work as a lowly dishwasher or "plongeur" in the city's hotels, and also in one dubious restaurant. We learn all the dirty behind-the-scenes secrets of these operations, and it's quite enough to make one's skin crawl and cause one to avoid hotels and restaurants forever.The second half of the book follows the narrator back to his native England, where he must find a way to get by in London while awaiting a permanent job. Here we are introduced to the tramp's way of life - vagrancy, begging, and sleeping in the cheapest (and filthiest) accomodations available. But we also get to know some of the narrator's fellow tramps, and to feel for them. They are not all the worthless, lazy scum that the higher classes of the time would paint them as. Orwell concludes the book with a brief treatise on the vagrant's plight and ways in which it can be eased, as well as making the tramp a usefull part of society.Obviously Orwell's closing call-to-action is not entirely relevant anymore, as the workings of society have changed somewhat over the last century, but the book is nevertheless fascinating. A reader may at first be a little thrown off by the lack of a central plot, but once past this it is easy to get sucked into the world Orwell has illustrated here. His imagery is so striking that you actually feel as if you are sharing the narrator's experiences. You can feel the intense heat of the hotel kitchens, feel the weakness and weariness that comes with malnutrition, smell the grease and the sweat and the dirt.And yet, as bleak as all this sounds, the book is not depressing. The narrator never lapses into dejection or self-pity, and the reader is left with a sense of hope throughout the novel. Being poor is not presented as a dead end - there are always ways to get by, some of them quite ingenious. And the narrator is even able to find humor in some of the truly absurd situations he finds himself in.Any fan of Orwell's works will not be disappointed with this book. Or even if you've read nothing by Orwell (in which case you absolutely must pick up "1984" at some point), and merely want a glimpse into the life of the poor and jobless at this point in history, this is the book for you. And the fact that the narrator is anonymous (although the story is largely based on Orwell's life, the narrator is not, as some reviewers have claimed, Orwell himself) helps us imagine that he could be anyone, and that even we could be living this life. It's fairly short and easy to read, but opens up a whole world - one that is rarely contem

The Real Kitchen and Hitchinï¿½ Confidential

Published by Thriftbooks.com User , 19 years ago
Like most of us, I read Orwell in high school ("Animal Farm" and "1984") and remained largely unaware that he?d written anything that didn?t involve either talking Trotskyite animals or a terrifyingly functional dystopia. A friend of mine gave me ?Down and Out in Paris and London? a month ago, and I was unable to put it down until I was done. In what is basically the chronicle of a couple of months of self-induced misery, Orwell explodes a lot of myths surrounding poverty and the spirit-breaking labor that is, for many, the only exit from it.We know the gist of the book: Orwell sets up shop amongst the ?common people,? first washing dishes in various Paris restaurants and then tramping around London and environs. Proceeding via introductions and anecdotes--some hilariously funny, others downright heart-rending--?Down and Out in Paris and London? offers a detailed tour of a side of life that most of us will only ever read about. From the painstaking descriptions of exactly what kind of muck is to be found on the floor of a restaurant?s kitchen in 1920s and 1930s Paris (you don?t want to know, but he tells you) to elaborations on how to skirt begging laws in London and the dangers associated with such living, Orwell makes his points, one after the other. To his credit, though, there is little dogmatic moralizing; when, at the end of the book, he tells you what he?s learned, he doesn?t seem to feel the need to shove down the reader?s throat what is clearly stuck in his own. The feeling is strong, though, that you?d have to be blind, crazy or both, not to reach the same conclusions.The greatest strength of ?Down and Out,? though, is the manner in which Orwell never attempts to pass himself off as one of the people he is pretending to be. The English band Pulp has a song about rich kids slumming with the common people, but the song points out that, if the going ever really got tough, the rich kids can always call Daddy and have him bail them out. Orwell has to realize that he is in that same privileged situation; his tramping in London, for example, is simply to kill time until he can take up a legitimate position, and, along the way, he is able to borrow money several times from a friend in order to make ends meet. This distance that he subtly maintains between himself and those who have little choice in their fate only adds punch to the lessons he learns, and Orwell?s probably privileged reader (at least privileged enough to spend money on books) is permitted to learn alongside him.There are picky complaints that could be lodged here--the untranslated French passages, for example, which will leave at a loss those without high school French--but, overall, ?Down and Out in Paris and London? is a great read, one of those few books that manages to be both entertaining and properly disturbing. It has all the wit and scoop of later efforts like Bourdain?s recent best-seller, ?Kitchen Confidential,? or Ehrenreich?s ?Nickel and Dimed,? but ?Down a

The Mona Lisa of the literature world

Published by Thriftbooks.com User , 20 years ago
A modest book void of foul language sex and violence, yet a masterpiece all the same. Anyone who has been through adversity or poverty would find the book almost too honest to accept. Anyone who hasnt should be glad that one man can take you this close without having to leave the life youve been accustomed to.A true literary genius.
Copyright © 2020 Thriftbooks.com Terms of Use | Privacy Policy | Do Not Sell My Personal Information | Accessibility Statement
ThriftBooks® and the ThriftBooks® logo are registered trademarks of Thrift Books Global, LLC