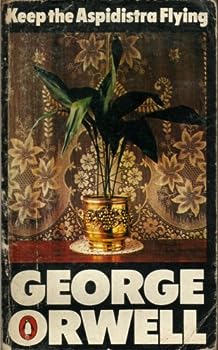 This description may be from another edition of this product. Gordon Comstock is a poor young man who works in a grubby London bookstore and spends his evenings shivering in a rented room, trying to write. He is determined to stay free of the "money world" of...

Published by Thriftbooks.com User , 13 years ago
After recently reading the 4 volume set of the essays, plus Coming Up for Air, which I found in my shelf unread, I had thought that the Aspidistra would be the closing session on Orwell for me. I thought I had covered the field. Unfortunately and surprisingly, the aspidistra are so fresh and enjoyable, despite their sordid subject, that I find myself under compulsive pressure to order the books that I have not read yet (the Clergyman's Daughter, the Road to Wigan Pier, Down and Out in Paris and London). As much as I like to look at plants, assuming they grow wild or they are cultivated by somebody else, I am no gardener nor botanist. I honestly did not know what an aspidistra is. I looked it up in the Langenscheid's Dictionary English - German. I learned that an aspidistra is an Aspidistra. Aha. Google Images teach me that the thing is a somewhat non-descript and somewhat unkempt pot plant. It seems to like growing in places that no self-respecting plant ought to survive. Orwell's novel has them as a symbol for undestructability under nasty circumstances. For the novel's hero Gordon Comstock, they are the enemy. They are allied with the oppressors, the seedy boarding houses and lower middle class dwellings that he loathes so much. They symbolize the lack of money; money rules, specifically when you don't have any. The twist of the 'plot' is that Gordon chose to be poorer than he needed to be, by throwing away 'good jobs' in the money making world. We have here a study in the pretensions of poverty. The most brillant parts of this amazing novel have us watch confrontations, or should I say Pas-de-Deux, of different social strata. Gordon tries to hide and is ashamed of his poverty, while his friend Ravelston is trying to hide and is ashamed of his wealth. The rich man is the socialist, who tries and tries to convince the poor man of the merits of socialism. Gordon can't be bothered, he doesn't have enough money to be a socialist. The novel is far exceeding my expectations and I may have to think again about my classification of Orwell as mainly an essayist.

Published by Thriftbooks.com User , 18 years ago
Having completed "Keep the Aspidistra Flying", I have now read all of the novels of George Orwell. I can say with such authority that this one may be his best. George Orwell was, first and foremost, a Socialist and this book is his examination of being a Socialist in a Capitalist world. His hero, Gordon Comstock, is mired in a dead-end job that is just middle-class enough to require proper dress and behavior but not enough to enable him to afford any but the most essential living expenses. We sympathize with him. Or at least we do until we realize that his disdain for the pursuit of money has pointed him in the opposite direction. He is so anti-capitalist that he purposely keeps himself in his lower state. He quit a previous job because it paid too much. He won't strive beyond his current status because then he would enter a higher social status. He is convinced of the righteousness of his beliefs even though he has bled his sister dry "borrowing" money from her over the years. She "lends" him the money because the family always had such high hopes for this erudite young man. Gordon complains, to those that listen, that money is the root of all evil yet he is so ready to be victimized by it. He complains to his girl-friend that she measures him by his net-worth. This isn't true but he can't see that the problem is that HE is measuring himself by his own net-worth. He talks the talk but can't walk the walk. Well, money leads to one disaster of his own making and ends up as the solution to another "disaster" of his own making. I'm sure the prospective reader would prefer to read the book to see how his story ends so I won't go into any more details here.This novel is enjoyable on many levels. I found myself, like most, getting upset with Gordon Comstock for his self-destructive "nobility". I was ready to rant and rave about it until I remembered my post-college Bohemian days and realized that I went through such a stage myself. I'm sure many of us have and so I think there is a personal connection that will appeal to a lot of readers. For pure literary merit, this is a hard 20th Century satire to top. Orwell scared a lot of people with his futuristic novels "Animal Farm" and "1984". He tried to indoctrinate many a reader with his Socialistic essays including his half-novel/half-essay; "The Road to Wigan Pier". I have a feeling that he was poking fun at himself in "Keep the Aspidistras Flying". Maybe that's why it works so well.

One of Orwell's Best

Published by Thriftbooks.com User , 19 years ago
My God! Whatever happenned to good old clean writing where one regards the scene, action, events and characters at hand, contemplating universals and dissonent examples to reach some higher, usually very personal, truth? Thank God there is still Orwell? This is one of his best. Forget the literary critic's remarks about this being a young Orwell. Who cares? It is honest, clean and offers a valuable example of life of working poor in England in the 1930s. When you contrast it to our present circumstance you see a lot that has changed and so much that has not; two pound / month was just not enough to survive, but to slowly starve to death. But Gordon will not yeild to the Money God that he has delcared war against. While he is waging this war we glimpse at his self-induced problems along the way. The ending poses that critical question; Is he a hero? Was he conqueror of, or conquered by the Money God? There are a few dated expressions which add colour to the book in my estimation. The trash readers of the times he refers to are unknown to most of us nowadays. But it does not matter. We know what he means. You could just as easily substitute Danielle Steel with the names of the other trash authors of the 1930s. We would then get his intent. A great read. A true modern classic.

A feat of brilliance (once again)

Published by Thriftbooks.com User , 22 years ago
I started to read 'Keep the Aspidistra Flying' on christmas day, and found that I had nearly finished it by the end of boxing day. I couldn't put it down! The book takes you through one man's (Gordon Comstock) struggle against the 'Money God' - with whom he began waging war early in his life. You travel with Gordon on his poverty stricken journey of self discovery and, indeed, on his road to maturity. His neglect for the people who care about him (his faitful sister Julia, and devoted partner Rosemary), and neglect for himself do make you angry at times, but this is Orwell's brilliance - the ability to make you feel passionately about things. This book, for me, was an absolutely brilliant read, especially when Orwell takes Rosemary and Gordon out into the country, to Slough - which is only 10 minutes away from my own home village! This book is a 'must' - go and read it!
Copyright © 2020 Thriftbooks.com Terms of Use | Privacy Policy | Do Not Sell My Personal Information | Accessibility Statement
ThriftBooks® and the ThriftBooks® logo are registered trademarks of Thrift Books Global, LLC