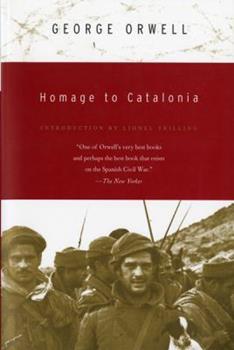 In 1936 Orwell went to Spain to report on the Civil War and instead joined the fight against the Fascists. This famous account describes the war and Orwell's experiences. Introduction by Lionel Trilling.

Published by Thriftbooks.com User , 11 years ago
My girlfriend and I are going to spend about a little over a week in Catalonia. I've been reading several books to get a better understanding of the people of Catalonia. I consider this book 'good'. I've enjoyed many of Orwell's books and this one has added to my growing understanding of the region however I would not look to it as a soul source of information. It's written in first person (as i'm sure you're aware) and it was very enjoyable easy read.

An Eloquent & Moving 1st-Hand Account Of The Spanish Civil War

Published by Thriftbooks.com User , 16 years ago
Generalissimo Francisco Franco's fascist troops invaded Spain in July 1936 in order to overthrow the newly established Republic headed by the Popular Front, (composed of liberal democrats, socialists, anarchists, trade unionists, communists and secularists). The country was basically divided into Red Spain - the Republicans, and Black Spain, represented by the landed elite, committed to a feudal system and Franco's cause, Fascists, the urban bourgeoisie, the Roman Catholic Church, and other conservative sectors. The number of casualties is only an estimate, but suggests that between 500,000 and 1,000,000 people were killed. Many of these deaths, however, were not the results of military battles, but the outcome of brutal mass executions perpetrated by both sides. During the war in Spain, approximately 38,000 non-Spanish, anti-fascist volunteers from fifty-two countries, took up arms to defend the Republican cause against Franco, who was aided by Hitler and Mussolini. Twenty-eight hundred Americans, in the Abraham Lincoln Brigade, fought here alongside their Spanish and international comrades-in-arms from 1937 through 1938. These men and women believed the defense of the Republic represented the last hope of stopping the spread of international fascism. Most of the volunteers were not political, but idealists who were determined to "make Madrid the tomb of fascism." English novelist, essayist, and critic, George Orwell was one of them. Orwell was not just a writer, he was a partisan and he was a political idealist. A revolutionary Socialist, not a Communist, he was affiliated with the Independent Labor Party (I.L.P.). Orwell originally traveled to Spain in 1937 to observe and to write, but he almost immediately enlisted in the militia as a private. At that time there were several political parties in Loyalist Spain, and each party had its own militia units, soon to be absorbed into the People's Army. Because Orwell's letters of introduction were originally from the I.L.P., which had connections to the P.O.U.M. (Workers Party of Marxist Unification - a small group of anti-Stalinists), he joined a unit of that party. Most volunteers fought Fascism under one of the Communist or Socialist banners, in a coalition effort, with the intention of working through political and social differences when the war was won. Until that time, he believed that the anti-Fascists should work together in a united front. When Orwell arrived in Barcelona, the Anarchists were still virtually in control of Catalonia. It was the first time Orwell had ever been in a town where the working class "was in the saddle." He clearly conveys the sense of excitement of seeing the city under de facto workers' control, and the intensity of the revolutionary spirit which coursed through the people. "Servile and even ceremonial forms of speech had temporarily disappeared. Nobody said 'Senor' or 'Don' or even 'Usted;' everyone called everyone else 'Comrade' and Thou,' and said 'Salud'

One of the greatest war books of the 20th Century.

Published by Thriftbooks.com User , 16 years ago
It's been said that George Orwell is every conservative's favorite liberal and every liberal's favorite conservative. This book likely did more to create that sentiment than any of Orwell's other works. "Homage to Catalonia" is the story of Orwell's experience fighting in Spain, during 1936 and 1937, against Franco's forces that were seeking to overthrow the Spanish government. Orwell originally traveled to Spain simply to report on the war as a journalist, but falling in love with the people of Catalonia and their revolutionary, honestly egalitarian spirit, Orwell joined the Workers' Party of Marxist Unity (POUM) militia. Once enlisted, Orwell traveled to the front lines of the fight in Catalonia. His observations of life on the front-line and the daily struggles for a soldier during war are at times funny, fascinating, and depressing. Remarking on war, especially the politics of war, Orwell writes, "I believe that on such an issue as this no one is or can be completely truthful;" yet Orwell seems supernaturally honest throughout this book. After risking his life for the socialist cause he believed in, even being shot in the neck, Orwell eventually realized that many people he once assumed were fighting for the same anti-Fascist cause as he were really no different than the enemy he was fighting. The anti-Fascist soldiers were generally divided into Anarchists (who believed that a Marxist revolution should be the immediate goal) and Communists (who believed that the Fascists must be defeated first and the Marxist revolution addressed after that). Orwell originally sided with the Communists in believing that the Fascists should be defeated first, but over time he came to realize that all the Communists were really wanting was the installation of their own totalitarian system. This left Orwell to fight with and support the Anarchists who were far more genuine than the Communists and simply wanted to be free from any oppressive rule. After months of political bickering, the pro-Stalin Communists in Spain began to arrest and remove the Anarchists with whom they had originally partnered in the fight against Franco, and many of Orwell's friends and brothers-in-arms were arrested and executed. Orwell, still recovering from his gunshot wound to the neck, barely managed to escape from Spain and avoid being caught in the brutal purge of the Anarchists. Knowing he had done nothing morally wrong or anything for which he should logically be arrested, Orwell inititally wanted to stay and help free his friends arrested in the Communist crackdown. But he soon came to realize, "It did not matter what I had done or not done. This was not a round-up of criminals; it was merely a reign of terror. I was not guilty of any definite act, but I was guilty of `Trotskyism'. The fact that I had served in the P.O.U.M. militia was quite enough to get me into prison. It was no use hanging on to the English notion that you are safe so long as you keep the law.

Getting Shot in the Neck in the Name of Anarcho-Syndicalism

Published by Thriftbooks.com User , 17 years ago
Ever wonder what it is like be shot right through the neck? Ever wonder what it is like to stare over open sights at an enemy soldier with his pants down (literally) relieving himself? Would you shoot? Ever wonder what it is like to fight with allies that may be as worse than the common enemy? Orwell experienced all of this and more as a member of one of the more obscure Spanish militias fighting for the Spanish Republic during the bloody internecine Spanish Civil War. He also became incredibly dissillusioned in the process. Finding his beliefs in revolutionary socialism, he was already jaded by communism and the cynical use it was put to serve Stalin's interests. He opted for a more loose organisation and therefore choose to enroll with the Anarcho-Syndicalists as a foreign volunteer in the Spanish Civil War. His particular group was called the POUMists (an acronym that I need not summarize here). Ill-equipped and with no training, they showed what raw idealism can do against Franco and his fascist oppression -- they stopped fascism cold on the battle field and were never found wanting in terms of courage. What did defeat them was the United Front launched by the Cominterm against International Fascism. For those that did not tow the line, Stalin's advisors and compadours inside the Spanish Communist Party sacrificed. Denied weapons, ammunition and food, the coalition --- made up a broad spectrum of liberal-democrats, progressives, socialists, communists, anarchists (and every shade between) --- were defeated in piece-meal battles. Orwell was shaped and scarred by the experience. Although always a social progressive, he realised that idealism in its most extreme forms could be as bad as the fascism one was fighting against. This shaped his eternal mistrust of Communism (but not as some rightist's bizaarly claim, push him into being some kind of conservative demigod).This book has it all: a trenchent analysis of political history, a serious war biography, a good slice of military narrative, and a chronicle of idealist growth, development and abandoning of a former way of thinking... Without a doubt one of my top 5 war biographies and one of the top 25 reads of my entire life, so far....

Published by Thriftbooks.com User , 21 years ago
In this gripping book, you find some of the best reportage about the Spanish Civil War and you get some of the most engaging descriptions of anarchist and communal living. People always complain about the part of the book which emphasizes party politics in Spain, and you can easily skip that--or, you can peer into a seminal experience for Orwell. His frustrations with the Stalin-supported Spanish communists drove him to write 1984 and Animal Farm. Orwell is better known for these anti-communist writings and less so for his own socialist creed and deep compassion for the poor. Homage to Catalonia captures both his admiration of the working classes and his abject fear of communism. For the writing, for the vision of collectivism, for the war journalism, for the eyewitness accounts of crucial history, and for many more reasons, this book should be a part of everyone's library.
Copyright © 2020 Thriftbooks.com Terms of Use | Privacy Policy | Do Not Sell My Personal Information | Accessibility Statement
ThriftBooks® and the ThriftBooks® logo are registered trademarks of Thrift Books Global, LLC