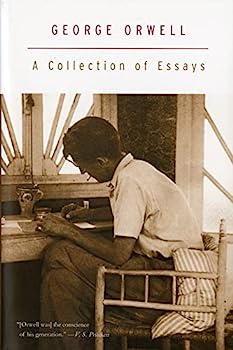 A Collection of Essays

George Orwell's collected nonfiction, written in the clear-eyed and uncompromising style that earned him a critical following One of the most thought-provoking and vivid essayists of the twentieth... This description may be from another edition of this product.

Great with tea and obligatory biscuit

Published by Thriftbooks.com User , 18 years ago
George Orwell, writer of such great classics as "No Winston, two plus two is five" and "All animals are equal" truely outdid himself with this book. His essay, "Such, and Such Were the Joys," is worth the price of the book alone. The descriptions therein, in the vein of 1984, are detailed and vivid to the point where I almost feel as if I remember and understand Orwell's childhood better than my own. In this essay one also catches a glimpse of what made Orwell the writer he was: a poor, pessimistic, sickly lad whose talent could have created it's own entire cannon if he'd lived longer and enjoyed a more work conducive atmosphere. For every reader who breathes to read, this book is an oxygen tank. (like the one they have at the bottom of the slopes in Aspen.)

Published by Thriftbooks.com User , 22 years ago
If you want to find out about Europe in the first half of the 20th century, this is the book you should book. These 300 pages offer excellent value for money; Orwell writes about the most diverse aspects of life: elitist literature and pulp magazines, the horrors of boarding schools or what it felt like to be a colonial officer in Burma. What he writes is full of insight and first-hand experience. You will find yourself telling others about what you have learned from this collection.Orwell's style is not just transparent "like a window pane"; it is just beautiful in its rhythms and deadpan humour. - My personal recommendation is the essay on "Boys' Weeklies". These magazines did not only inspire Rowlings' Harry Potter, but seem to have been an early form of the theatre of the absurd as well...The only setback of this edition is that it does not say where the essays where first published.

Political, but not in conventional ways.

Published by Thriftbooks.com User , 23 years ago
Orwell was anti-fascist as the last reviewer wrote, but he was also anti-communist,having seen it first hand in Spain. His life as an author was quite dymnamic. You can see a change in his politics from book to book. His early death leads you to wonder what Orwell would have written about the space age. This book is so well written that you will find enjoyment in subjects that you care nothing about. His Essays on Dickens and Kipling were more insightful than the semester in college I spent on 19th century English Literature. His reflections on Ghandi expose the flaws that most Ghandi fans ignore or hide. He then goes on to celebrate the man for his virtues.His look at Henry Miller was amazing. Orwell saw through the shock value of Miller's 1930s autobiography and recognized great writing when his contemporaries dismised the work as pornography.Orwell's easy language coupled with genius-level insight make this a book to read again and again.
Trustpilot
Copyright © 2022 Thriftbooks.com Terms of Use | Privacy Policy | Do Not Sell My Personal Information | Cookie Preferences | Accessibility Statement
ThriftBooks® and the ThriftBooks® logo are registered trademarks of Thrift Books Global, LLC