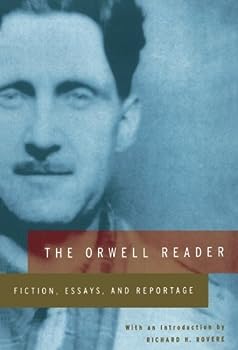 This description may be from another edition of this product. Here is Orwell's work in all its remarkable range and variety. The selections in this anthology show how Orwell developed as writer and as thinker; inevitably, too, they reflect and illuminate the...

Published by Thriftbooks.com User , 13 years ago
The blurb on the back of the book calls THE GEORGE ORWELL READER "a feast of reading for the thinking person." It is. For years this book was virtually my Bible, occupying a permenent place on the nightstand and accompanying me on every long trip, until it assumed its present, scribbled on, food-stained, dog-eared appearance. Orwell has been called "the conscience of his generation", but more than that, he possessed an intellectual honesty which is utterly extinct among today's political writers - all of them, Left and Right, are either blinkered, ivory-tower idealogues, rabble-rousing demogogues or line-toeing party hacks. Whether you agree with Orwell's own political views (often, I don't) is immaterial; his ability divine and expose hidden motives, to sniff out hypocrisy, and to call a spade a spade and then use it to slice open those who refused to do so, are simply unmatched. Seldom if ever since Johnathan Swift has anyone written with such an utter disregard for tact, diplomacity, or political orthodoxy. A die-hard Socialist who was shot fighting with a quasi-Marxist militia during the Spanish Civil War, Orwell actually spent at least three-quarters of his intellectual life scourging and ridiculing Leftism and Leftists (those who "got their crockery from Paris and their political opinions from Moscow"), not out of self-sabotage, but because he hated cant, lying and cruelty and found a surplus of these traits on his own side of the isle. The READER combines all three types of Orwell's work, including a sampling of some of his best essays and reportage ("Shooting An Elephant", "Second Thoughts on James Burnham", "Politics and the English Language", "Lear, Tolstoy and the Fool", etc.), and lengthly excerpts from his novels BURMESE DAYS, A CLERGYMAN'S DAUGHTER, COMING UP FOR AIR, KEEP THE ASPIDISTRA FLYING, and 1984, his nonfiction works THE ROAD TO WIGAN PIER, DOWN AND OUT IN PARIS AND LONDON and HOMAGE TO CATALONIA, and the seminal essay "The Lion and the Unicorn." For Orwell fans, it's a sort-of "greatest hits" album, and for strangers to his work, it works a terrific primer, providing a very diverse and wide-ranging sample of his thoughts. There will probably never be another Orwell: humanity has marched too far down the road of blind party loyalty, one-issue voting and material selfishness to produce one. But thanks to books like this, there is no need for a replacement. Whenever we feel ourselves getting too complacent, too stupid or too hypocrtical, Georgie boy and his trusty literary spade will be there to stab us in the arse.

Amazing Introduction to Orwell. But buy the originals.

Published by Thriftbooks.com User , 13 years ago
This book has been my introduction to Orwell. He is an amazing writer and thinker. Despite the fact that my politics diverge considerably from his (I consider myself an avid capitalist) I have so much respect for his clarity of thought and his unparalleled skill as a writer. That said. I would rather buy the originals than these excerpts. Which is what I am going to do now. :)

Published by Thriftbooks.com User , 15 years ago
The honesty and realism of Orwell never ceases to amaze. He opens 'Shooting an Elephant', the first story in this collection, by telling us that he was hated by many people. He will spend the rest of the essay showing us why. The pointless death of an animal no longer harmful becomes the legal murder we witness in 'A Hanging'. In both cases we see people becoming their jobs, counting doing one's duty more important than being human. He sees "the dirty work of Empire at close quarters" and knows that " imperialism is an evil thing" but continues to do his duty as both imperialist and colonist would see it. The amazing thing is that he is not alone in this. In "A Hanging" the hangman is a convict and after the deed is done we see both Europeans and natives laughing and drinking together. In "Shooting an Elephant" he is stuck between "hatred of the empire" and "rage against the evil-spirited little beasts" that made his job impossible. But again, we witness crowds of natives expecting him to be a Sahib. Orwell's stories show us the demoralizing duties, the pompous gravitas of Imperialism. It dehumanizes both rulers and ruled, turning them into the role they play rather than allowing them to become who they might have been. Both fortunately and unfortunately, he also knows that, "the British Empire is dying [...] it is a great deal better than the younger Empires that are going to supplant it." This collection is pure Orwell. His unsentimental love of ordinary people, coupled with the easy, natural, sympathetic description of complex characters, relationships and motivations, reveal Orwell as a man who was genuinely at home with ordinary people. Only he could write movingly of how imperialism traps (freezes!) both rulers and ruled into roles and duties, of the daily humiliations of colonialism, and the little lies that keep the system going, and still show the oppressors as human beings. Even people we might miss. The only one I have ever read who comes close is Camus on Algeria. In '1984' (only excerpted in this collection), a prophesy of what the Empires destined to replace the British empire could become, it was his ear for the corruption of language by permanent war that struck me, when I first read it well over three decades ago, as the perfect lens for viewing the lies spoken daily by both sides during the Vietnam War. Also, Orwell's insight into the political necessity of continual crises to keep the people both frightened and grateful for protection explained rather nicely how the communists (or Islamic Fundamentalists today) could work with us (and we with them) whenever it was politically convenient to do so. In the collection of literary pieces what surprises is that a man of the left like Orwell, who was always a socialist, could appreciate authors as patriotic and conservative as Dickens and Kipling. We should always measure men by whether they can appreciate the strengths of their enemies. To my mind it i

Published by Thriftbooks.com User , 22 years ago
Er, actually Orwell did fight on the Republican side in the Spanish Civil War . Franco was fighting against them as a Monarchist/Catholic/Fascist. Just thought I should clear that up.

Published by Thriftbooks.com User , 22 years ago
Bad point: according to be back of the book Orwell fought on the side of Franco (republicans) during the Spanish civil war, which he didn't it was poum and there were not on Franco's side. which is quite humourous - is this a Russian counter propaganda myth being given credibility?The hanging, how the poor die, England your England are a few of the pieces here that complete my Orwell literature shelfNot sure why there are parts of his Novels in this book, but assuming the cover text it may be of some help to the next writer for the back cover, but it might be of use if you are too lazy to read his books, and write covers describing his work.
Copyright © 2020 Thriftbooks.com Terms of Use | Privacy Policy | Do Not Sell My Personal Information | Accessibility Statement
ThriftBooks® and the ThriftBooks® logo are registered trademarks of Thrift Books Global, LLC