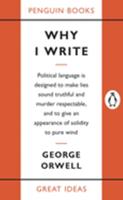 A selection of George Orwell's politically charged essays on language and writing that give context to his dystopian classic, 1984 Throughout history, some books have changed the world. They have transformed the way we see ourselves--and each other. They have inspired debate, dissent, war and revolution. They have enlightened, outraged, provoked and comforted. They have enriched lives--and destroyed them. Now, Penguin brings you the works of the great...

Published by Thriftbooks.com User , 11 years ago
This little book contains three fabulous essays and a story by the greatest essayist of the last century. The title WHY I WRITE is also the title of the first essay. These essays represent types as well as specific writings- types that can be found in other essay collections. This little book reveals Orwell's lost legacy as an essayist and journalist which has been overshadowed by his novels. WHY I WRITE.Why did Orwell occupy his life with writing? His early childhood was punctuated with poetry from the age of four and ended with high school editing. I have tried to find these early writings but,alas,have failed to find anything from earlier than 1920...seventeen in Orwell years. Orwell gives us insights into the reasons he writes: his ego, historical documentation, political influence (unavoidable for the citizens of the Twentieth Century according to Orwell), and ascetic impulse. Orwell, in a letter, once described himself as a "half intellectual" who avoided abstraction; here he tells us that he is concerned only with material things and "the surface of the earth." p.9. The earthiness of Orwell's writing lead to a humble, direct style of writing that is exemplified in his essays on society. ENGLAND YOUR ENGLAND closely resembles another essay not in this book: My COUNTRY RIGHT OR LEFT. ENGLAND YOUR ENGLAND discusses the changes and characteristics of England at war. The crumbling British Empire with its useless class peerage system is seen as doomed not only by a possible NAZI victory but the technocracy creatd by a large, growing middle class. England is seen as incipient revolutionary society with an expected upheaval in "six months to a year" from 1940- which could not be stopped unless England was invaded. In MY COUNTRY... the revolution was also incipient but would be marked by "Red militias at the Ritz" and "bloody London gutters." One revolution by the supplanting of the peerage class and yet the other as an old style proletarian uprising. The Labor Party gets short mention as being pro-capitalist since it depends on rising wages to placate union members who support the party. The reality was the election of Winston Churchill and the Tories during the War, the post war victory of Attlee's Labor Party and the creation of the welfare state by the same middle class Orwell mentions in this essay...hardly a revolution. A HANGING. The closest Orwell gets to Camus' THE STRANGER. A policeman observes the execution of a Burmese Hindu who dies for unknown reasons. The doomed man politely avoids a puddle before he hangs and a lone dog seems prescient about the coming death. The brutal administration of Burma was no resort hotel job...did Orwell know more about the execution than he writes about? POLITICS AND THE ENGLISH LANGUAGE- a typical language essay. Often quoted in relation to totalitarianism. Orwell tells us that language molds thought and that " changing language will change the political climate". We are introduced to exa

Orwell's unique talent as a writer

Published by Thriftbooks.com User , 12 years ago
In the book, George Orwell, one of the most talented and gifted writers in the English world, depicts in a frank manner about his literary writing motives and how he reconciles aesthetic enthusiasm with his political purpose. The book consists of 4 key chapters. Chapter 1 is a full introduction of his literary journey from childhood to adulthood. Orwell maintains that a writer's real experience in life can substantially determine his/her impulse to write (P.4). The four key motives in literary writing including sheer egoism, aesthetic enthusiasm, historical impulse, and political purpose exist in different degree in different writers, depending very much on the atmosphere he/she is living. To Orwell, the key motive to write is that he intends to tell devastating truths about non-individual and public activities with his literary writing skills without humbug, purple passages, meaningless sentences, and decorative adjectives (P.10). Chapter 2 is about English politics during the Second World War. As a key champion of democratic Socialism, Orwell criticized decadent hypocritical and privileged high class who dominated every aspect of political and economic life in England but they failed to resist any serious war attack by Fascism (P.35). He maintained that England should undertake a wholehearted political change (P.48) if people intended not to be conquered by Hitler. Democratic Socialism could centralize all goods of production for armament purpose and unite people from top to bottom due to approximate equal distribution of income (Pp.74-76). Chapter 3 was a hanging case in Burma. Orwell uses his literary writing skills to narrate the hanging process of a Hindu condemned prisoner. This unhappy narration is full of detailed descriptions and arresting scenario, and also full of purple passages in which Orwell's literary writing skills are demonstrated. From the condemned cell where the hanged Hindu squatted at to the gallows where the prisoner's neck was hanged for execution, Orwell looked at this sudden life and death process with great unhappiness but smiles. Chapter 4 is a critique of the decadent English language. Orwell maintains that a good piece of political writing should avoid having difficult and useless phrases and jargons (P.120) and it should be clear and meaning and short in words (P.119). In this chapter, Orwell illustrates how academicians and political writers use operators, pretension diction, dying metaphors, and meaningless words (Pp.106-109) to make their works to be a sheer humbug. Writing can be a very exhaustive and horrible struggle, particularly for those who aspire to write a book. This book is highly recommended to readers who intend to think hard about how to write.

Question is: Why Should I Buy this particular "Why I write?" Compilation?

Published by Thriftbooks.com User , 13 years ago
In evaluating "Why I write?," I am not evaluating Orwell: he is - in my opinion - beyond evaluation. Brilliant, unorthodox, humanistically transparent - he is a model of existential integrity. In evaluating "Why I write?" I am offering an evaluation of this particular compilation of essays. I am trying to answer the question of "Why should I buy the 'Why I write?'" This particular compilation of Orwell's essays consists of "Why I write?," The Lion and the Unicorn," "A Hanging," and "Politics and the English Language." As you might have already gleaned from you search, the books of Orwell's essays are all over the market place. This one - consisting of four iconic essays - is a great primer. The "Why I write?" humbles with introspection and humanistic self-acceptance. "The Lion and the Unicorn" showcases Orwell's keen journalism and the capacity to be on the outside of the phenomenon in question, even when that phenomenon is his own culture. "A Hanging" is a normalizing glimpse into how we deal with our own mortality superimposed onto a social statement against capital punishment. And the "Politics and the English Language" is a brilliant examination of the human consciousness, a study of the interplay of thought and language, an anti-dote to propoganda, a treasure trove of linguistic hypotheses, and, if nothing else, a useful commentary on the rationale behind the "1984" Newspeak and Doublethink. As such, this particular collection of Orwell's essays reveals the breadth of his thematic spectrum - without the biographical weight of more exhaustive essay compilations. Pavel Somov, Ph.D. Author of "Eating the Moment: 141 Mindful Practices to Overcome Overeating One Meal at a Time" (New Harbinger, 2008)

Published by Thriftbooks.com User , 15 years ago
Why I Write is a collection of four pieces by one of the best writers of the twentieth century. George Orwell is best known for his political fables Animal Farm and 1984, but was also a prolific essayist and author of numerous short stories, many of them based on his own experiences in British-controlled Burma. This books includes three essays--"Why I Write", "The Lion and the Unicorn", and "Politics and the English Language"--and the short story "A Hanging." "Why I Write" offers the reader a look into one great writer's motivations for writing, as Orwell lays out the only real reasons anyone writes. "The Lion and the Unicorn" is fascinating, not only for its often humorous descriptions of the British national character, but for the political ideas expressed in it and the knowledge, made clear by Orwell at the beginning, that this was written in the midst of the Blitz. "Politics and the English Language" is a brief guide to the fatal flaws of modern writing--all of which have lasted beyond Orwell--and how to mend them. "A Hanging" is reminiscent of another of Orwell's famous short stories, "Shooting the Elephant," as it describes an otherwise mundane action in ominous, metaphoric terms. While hardly exhaustive, this collection of Orwell's essays is a good introduction to Orwell, his writings, and his political views. Makes very good reading for a trip, which is where I read it. Highly recommended.

The dangers of the political spin cycle.

Published by Thriftbooks.com User , 15 years ago
"Political language . . . is designed to make lies sound truthful and murder respectable, and to give the appearance of solidity to pure wind" (p.120). "If thought corrupts language, language can also corrupt thought" (p. 116). "Every line of serious work that I have written since 1936 has been written, directly or indirectly, against totalitarianism and for democratic Socialism, as I understand it," George Orwell wrote in 1946. Best known for his haunting novels on totalitarianism, Animal Farm (Signet Classics) (1945) and Nineteen Eighty-Four (1949), Orwell (b. Eric Arthur Blair; 1903-50) was a political and cultural visionary in his anti-Stalinist writings. In his two dystopian novels, Orwell envisions a bleak society controlled by the state. His name ("Orwellian") has become synonymous with the government oppression depicted in 1984, and the euphemistic and misleading language employed by the government (e.g., "Ministry of Defence," "collateral damage," and "pacification") as a manipulative tool for its own political purposes. In his essay, "Politics and the English Language," Orwell emphasizes the importance of language that is clear and honest. (It should be noted that this review refers to the 2005 Penguin Great Ideas edition of WHY I WRITE, which includes the essays "Why I Write," "The Lion and the Unicorn, "A Hanging, and "Poloitics and the English Language.") G. Merritt
Copyright © 2020 Thriftbooks.com Terms of Use | Privacy Policy | Do Not Sell My Personal Information | Accessibility Statement
ThriftBooks® and the ThriftBooks® logo are registered trademarks of Thrift Books Global, LLC