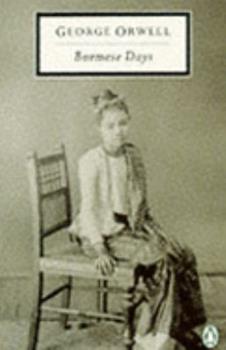 This description may be from another edition of this product. Orwell draws on his years of experience in India to tell this story of the waning days of British imperialism. A handful of Englishmen living in a settlement in Burma congregate in the European Club,...

Published by J.S. Kim , 9 months ago
Orwell sure knows how to entertain readers on a fully captivating story line as complex yet current enough mixing corruption, with true depiction of racism as it was, with a "partisan" main character wondering if there was more to life than there was back then, including women, if that's all there was and even now. To move the story with romantic interest involved was truly amazing, to the point of hilarity yet compunction for the main character, that the ending was almost an after thought it seems. A great fun read, historic report of the time with dialogue lacking in Conrad, and the domestic lives involved including the concubines or prostitutes he is stuck with as there and others they claim as "comfort women" are actually bought on a whole like slaves. But here, she had some clout as it depends on the seller, and what they seek to get. When does love have anything to do with it for prostitutes and pimps, wanting a hand in to politics and domestic life? Great read!

Published by Thriftbooks.com User , 13 years ago
With his very first novel, Orwell earned an honorable position on the crowded shelves of Raj Lit. It was a kind of self-liberation, so he could drop the subject henceforth. He had spent 5 years in Burma as a police officer. Why had he done that? His family was of the shabby genteel class, and his father's pension from the imperial service in India was barely enough to carry him through school. So he skipped university and did what the people in his novel do: sign up for the colonies in the hope of reasonable wealth and career. When he quit after 5 years, he had some explaining to do. He did it with this novel. Most first novels are autobiographic to some extent, but Orwell did something different: he figured out what he himself would have become had he stayed. His 'hero' Flory is an alter ego under the hypothical assumption of having stayed for 15 years instead of quitting after 5. Flory has a different job, but that doesn't matter much. He is a deeply lonely and frustrated man without prospects. He is disgusted with himself and with his social crowd, the sahiblog, who enforce conformism in the most primitive way. They are generally a disgusting group of people. Flory meets a young woman who seems the answer to his loneliness problem. For her, he might be the solution to her problem, which is the expectation of spinsterhood in poverty. They misunderstand each other thouroughly and make a huge mess of it. The personal tragedy of Flory is framed by stories of imperial intrigues, by local officials playing Machiavelli and by the sahibs sinking into delirium tremens. I read it first when I was working and living in other parts of the by then former Raj. I think everything would have been different if the poorpeople, the sahiblog, had had airconditioning. They might have been able to use their brains more.

"...the sun glared in the sky like an angry god, then suddenly the monsoon blew westward..."

Published by Thriftbooks.com User , 14 years ago
'Burmese Days', George Orwell's first novel, was based on his five years' experience as a member of the British Indian Imperial military police in Burma, which was part of British India at the time (1922-27) and remained so until 1937. Orwell was born in Bengal British India where his father worked for the Opium Department of the Civil Service. Orwell sets his rather sordid tale in a remote station of Kyauktada in Upper Burma. Through Orwell's considerable literary skills the reader feels the heat and rains: "...from February through May the sun glared in the sky like an angry god, then suddenly the monsoon blew westward, first in sharp squalls, then in a heavy ceaseless downpour that drenched everything until neither one's clothes, one's bed, nor even one's food ever seemed to be dry. It was still hot, with a stuffy vaporous heat. The jungle paths turned to morasses, and the paddy fields were great wastes of stagnant water with a stale mousy smell...Through July and August there was hardly a pause in the rain." Fictional Kyauktada station consists of eight whites in the midst of thousands of Burmese. Eight whites holding on to their cribbed vision of civilization with a social life centered around a cheap whites-only club and the once-every-six-weeks visit of the Anglican priest. Although he changed the names, Orwell's characters were based on real people he encountered. The corrosive affect of colonial rule takes a toll on everyone involved, British and Burmese alike. The Anglo Indians generally display racist attitudes that ranged from an accepted sense of one's own 'natural' superiority to raging hate. The Burmese are nearly as repugnant as they scrape and bow to curry favor with grater and lesser degrees of sincerity. The protagonist Flory is the only partial exception, but his maddening equivocation ultimately leads to dire results. Several of the British sink into booze to put away the malaise. Orwell had difficulty getting 'Burmese Days' published partially out of fear that it would anger supporters of the British Empire (especially Anglo Indians) and also fear of libel suits. After reading Burmese Days you will agree that these reactions would not have been surprising. No one comes off looking very good, British or Burmese, but least of all the British Empire. Was it really as bad as Orwell portrays? Perhaps it was, after all Kyauktada was far from a plum assignment. In any event Orwell's `Burmese Days' portrayal is closer to the mark than any romanticized renderings. Highly recommended for anyone with an interest in the Asian subcontinent.

Published by Thriftbooks.com User , 18 years ago
Orwell's "Burma Days" is a masterpiece. I ought stop right here and just do nothing more than insist in my most persuasive tones that you should read it. But that wouldn't be much of a review, so I will say that Orwell wrote a novel that showcases exquisitely-drawn characters against Colonial Burma and the English Raj in the most masterful way possible. The descriptions of the British and Burmese characters (especially the unsavory ones,) the sweltering heat, the sodden texture of everything rotting in the jungle humidity, and the awful, filthy Burmese food are astonishingly to the point. After a few paragraphs, you can almost feel the brazen sun roasting your own head.James Flory, the protagonist, is described as ugly, deformed, badly brought up, cheaply educated, and yet, we sympathize with him, as Orwell means us to do. Flory is obviously an alter-ego of Orwell, who also served in Burma. The plot, where a nasty local Burmese magistrate connives to discredit a social climber of an Indian doctor, is a simple enough device to manipulate each character along the fatalistic road to Hell. The theme of a man past his youth, who drinks and thinks too much, who falls in love with a simple, thoughtless pretty woman is very like Winston Smith in 1984 and his fatal attraction to Julia. Here, Flory falls smack in love with Elizabeth, who is a bob-haired adolescent who cringes at the word "Art." Orwell satirizes the British bullies and exiled failures who run the colonies and love the natives for being powerless and meek. Orwell's eye for cruelty is sharp, his wit is biting, and his writing skill is at its best in this novel. Highly recommended.

Published by Thriftbooks.com User , 21 years ago
It is a pity that all the attention on Orwell is always on Animal Farm and 1984, becuase he has in his short life written quite a few other brilliant books of which Burmese Days is one.Burmese days is the strongest criticism of the colonial past I have read. It is a biting and cynical satire on the life of a bunch of worthless good-for-nothin's in the early part of this century in Birma.None of the characters is in the least likeable. The main protagonist Flory has his moments but fails miserably at the only instances ( the membership for the Club for his Indian friend)in which he could have made a difference. In a way he resembles Saint Peter but withouth the remorse.His collegues at the Club are at best an empty headed lazy bunch and at worst outright lower class racists. Ellis would have lived in the slums of London but here in Birma he feels superior to every "nigger"" ( That Orwell uses this word frequently adds to the dark and biting spirit of this novel).The girl, Elizabeth Lackersteen, is more stupid than Daphne Manners ( Jewel in the Crown) or Adela Quested ( Passage to India) and in her "innocence" ( by Orwell, more than Scott and Forster, poignant depicted as ignorance and stupidity) and causes the same problems for the people around them in particular the Birmese and the Indians.Is it clear that the Europeans are all sinners, the "surpressed" are certainly not saints. The birmese characters are extremely corrupt and the girls do not display very high moral values. The Indian doctor is wonderful; his whole life he has had only one ambition and that is to be part of the English class. In order to avoid embarrassment he assures the English, however, that when the membership is offered he will be deeply honoured but never use it! All this is written in a wonderful prose and a very tight storyline; the hand of a master. It helps you to understand how incompetent Colonial Rule has been in some places and in what a mess that has resulted. One has only to visit Birma these days ( as I do from time to time) to see what Orwell meant Reading the novel fifty years after the colonization ended gives you a severe feeling of embarassment and an everlasting impression of the Colonial past of the European countries. It will change the way you see things and that is what Orwell had in mind with all his social-realist work.

Published by Thriftbooks.com User , 21 years ago
I have to admit to being a huge Orwell fan and having lived in Burma for several years (and having visited the location of the story in "Burmese Days" (Katha), I believe this book presents one of the most accurate representations of the Burmese character and of the relationship (that was) between the Burmese (as opposed to the Karen, the Chin and other minorities). Anyone who desires to understand Burma, its people and its government (Aung San, Ne Win to the present SPDC) should read this book. It is a masterful work that remains important for several reasons.
Copyright © 2020 Thriftbooks.com Terms of Use | Privacy Policy | Do Not Sell My Personal Information | Accessibility Statement
ThriftBooks® and the ThriftBooks® logo are registered trademarks of Thrift Books Global, LLC