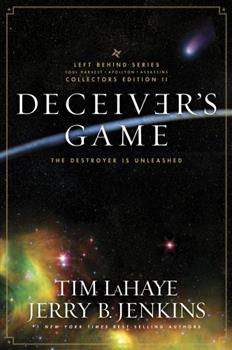 The series that became a phenomenon is now available in a four-volume Collectors Edition. The New York Times and USA Today best-selling series that has sold over 63 million copies will now be available in a four-volume Collectors Edition. With three books in each volume, this is the perfect way to revisit the series that captured your imagination or discover it for the first time. Volume I, Rapture's Witness, contains Left Behind, Tribulation Force,...

Left Behind (The Series)

Published by Thriftbooks.com User , 11 years ago
I love these stories. I had the entire Left Behind series when they came out. I had since donated all of them to a local library,and when I saw that the story is back and placed in only 4 books, I wanted to buy and read the story all over again. These books are so well written,that you almost seem to get to know all the people in the story.I am so thankful to God that I know,(I will not be left behind.)

Published by Thriftbooks.com User , 11 years ago
I couldn,t put this book down. Gave me food for thought. I will definately be purchasing the rest of these books.

Published by Thriftbooks.com User , 11 years ago
Hopefully no one buys this book without reading the editorial comments that lets them know it is a compilation of 3 previously published books: Soul Harvest, Apollyon, and Assassins. This is particularly troublesome to those of us that buy books on line, but even those in a hurry in bookstores might mistake this for a new book, since there is only a small illustration on the back cover. I'll have to assume that there is not an attempt to deceive people into buying `Deceiver's Game'. These are the 4th, 5th and 6th books in the Left Behind series. The stories do seem to go down in quality from the higher standards and interest of the 1st book. There is the interest of the Christian element, but there is also a science fiction apocalyptic turn in the writings. Soul Harvest takes place after a series of destructive earthquakes. Rayford Steele, a former pilot searches for his family while working for the evil Nicolae Carpathia. Apollyon has Hattie, Raymond Steele's former stewardess, pregnant with Carpathia's baby, but both Stelle and Hattie are having serious doubts concerning their actions and being in Carpathia's company. Assassins deals with, as the title implies the plot to assassinate Carpathia. There is much action and information of Evangelical descriptions, but much of the plot becomes repetitive. The continued use and relying on the worldwide internet after such destruction, at times seems improbable, in that it could be reaching the millions of people claimed in the plotlines. This collection would be a good buy for those who want these 3 books and have not already purchased them.
Copyright © 2020 Thriftbooks.com Terms of Use | Privacy Policy | Do Not Sell My Personal Information | Accessibility Statement
ThriftBooks® and the ThriftBooks® logo are registered trademarks of Thrift Books Global, LLC