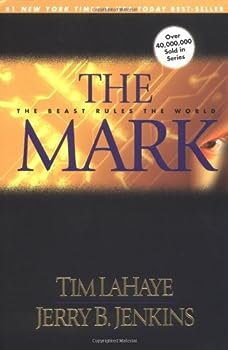 The Mark: The Beast Rules the World (Left Behind No. 8)

(Book #8 in the Left Behind Series)

This description may be from another edition of this product. Book 8 in the 12-book series that has sold over 63 million copies Read the books that launched a cultural phenomenon "This is the most successful Christian fiction series ever." --Publishers Weekly...

An AMAZING SERIES OF BOOKS

Published by Thriftbooks.com User , 20 years ago
Anyone who has enjoyed the Left Behind series owes it to themselves to read The Christ Clone Trilogy by James BeauSeigneur. The entire CHRIST CLONE TRILOGY is very well written. I simply couldn't put them down. I suggest you read this series with a highlighter nearby so you can mark things and research them for yourself. This is made easier by BeauSeigneur's use of footnotes.The Christ Clone Trilogy will surprise you with nearly every page. I highly recommend this trilogy to anyone who wants to understand biblical prophecy and the book of Revelation. BUY THESE BOOKS, READ THEM, GIVE THEM TO YOUR PASTOR TO READ, AND BUY COPIES FOR YOUR FAMILY!

Published by Thriftbooks.com User , 20 years ago
Everybody that has read this 9 book series are going to find this book fascinating because we still have the same characters and their strugle to survive the final tribulation.This book is full of adventures and the author finally reveals important things about what role each of the characters is going to play against Nicolas. Of course i cant wait to read book number 10 , and I bet neither can you guys , so please Mr. La Haye , hurry up...

Published by Thriftbooks.com User , 21 years ago
This book was better, by far, than any of the others...well, maybe not as good as the first. I was so excited by the story and the characters that I found it hard to put the book down. I have read other reviewers say that there was less action. I disagree. I think the action and the stories blended well together. Indwelling was rather dull and slow moving. This book was fast paced. The new characters introduced here were exciting to hear about. They gave me new prospective on Christianity in other cultures. The form of the mark was facinating and the guilotines brought me to tears. The strength of the true believers made me proud.The first book in the series is still my favorite and I think it will always be my favorite. But this book was absolutely spectacular and I can hardly stand waiting to hear how God will impact Chaim...or how Chang will help the cause. What is in store for Hattie...Leah...Ming...Abdullah...etc... If you are a new reader to the series...start at the beginning and read them all. I recommend this series to everyone. Yes, the writing of the book is simplistic...but the spiritualness is breathtaking. The first book brought me to Christ and the following books get more exciting due to my love for Christ and the growing love of the believers that were...left behind.

Published by Thriftbooks.com User , 21 years ago
Well, it has been a long wait since The Indwelling, but having read The Mark within a couple of days I have to say it was worth the wait. I was addicted, challenged and terrified as I became engrossed in the force's mission, and about Nicolae's latest plots. I found this as readable as the earlier ones, and as action packed as Apollyon, but overall it challenged me in my faith. It mixed some of the best qualities of the earlier books, occasionally however with questionable theological interpretaion, but it had me on the edge of my seat.Roll on book 9!
Copyright © 2020 Thriftbooks.com Terms of Use | Privacy Policy | Do Not Sell My Personal Information | Accessibility Statement
ThriftBooks® and the ThriftBooks® logo are registered trademarks of Thrift Books Global, LLC