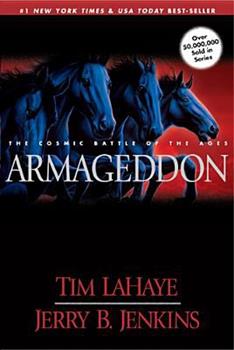 The scattered Tribulation Force is drawn inexorably toward the Middle East, as are all the armies of the world, when human history culminates in the battle of the ages. During the last year of the Great Tribulation, safe houses are no longer safe, and the cast of characters dramatically changes. By the time of the war of the great day of God the Almighty, the globe has become a powder keg of danger. Except those already in Petra, everyone has been...

First time I threw a book in the garbage

Published by Beef , 1 year ago
Think my title sums it up. Terrible terrible writing. Ok concept. There’s so many fewer devote christian writers that anything from them seems like it gets published. I have seen better writing from teenagers back when I was an editor.

Ready for the finale!

Published by Thriftbooks.com User , 18 years ago
ARMAGEDDON picks up where THE REMNANT left off, leaving us waiting for the glory of the Second Coming and the series to finally wrap up. I was a big fan of the series during the first several books. Although quite unrealistic in their approach, the Left Behind books present the tribulation in a serial form that is quite entertaining. But I'll have to agree with a number of other reviewers that the series has stretched on far too long, most likely to generate money. The past several editions have rehashed plot segments from previous books, helping to add text and pages to the newest installment. Certainly, they could have finished this series by now. If you're a fan of end times fiction, I suggest picking up the CHRIST CLONE TRILOGY. The plot's a bit more believable, and you only have three books to buy instead of twelve! Better yet is CONQUEST OF PARADISE which is only one book and presents the most realistic portrayal of the tribulation. CONQUEST OF PARADISE combines the page turning excitement of Left Behind with the technology and realism of IN HIS IMAGE, BIRTH OF AN AGE, and ACTS OF GOD. Readers would do far better to pick up these books instead. Since I've read this far, I'll most likely buy the last book in the series when it's released, but I'll do so skeptically. Despite this apprehension, I have to give ARMAGEDDON five stars because I like the genre, and especially this book which is one of the best in the series to date.

While I wait for Glorious Appearing

Published by Thriftbooks.com User , 18 years ago
I am a HUGE fan of Left Behind! I've been reading since December 1995 and even have first printings of all 11 Left Behind books in near mint condition -- my prized possessions! I've read the series all the way through 6 times and will do it again just before Glorious Appearing is released in March 2004. Anyway, I've been seing all the recommendations for In His Image by James BeauSeigneur and then I saw him on the Harvest Show on TV. Just to check it out, I bought the book and it really is a GREAT book. It's not at all like Left Behind even though it's about the end times. Instead you see things more from the perspective of non Christians who don't know what's hapening because things aren't as obvious as they are in Left Behind. Anyway, it looks like a really good series and all three books will be out before Glorious Appearing comes out in March, so it give me some exciting reading while I wait.Also recommended: In His Image: Book 1 of The Christ Clone Trilogy

Published by Thriftbooks.com User , 18 years ago
Christian authors have different ideas on how Biblical prophecy will occur. Whether it's Tim LaHaye and Jerry Jenkins' LEFT BEHIND series or James BeauSeigneur's CHRIST CLONE TRILOGY, the areas of agreement are much greater than where they disagree. Yes the focus is different - LEFT BEHIND looks at the end times through the eyes of believers and the CHRIST CLONE TRILOGY looks through the eyes of unbelievers - but where it's important, they're in agreement. The most exciting thing is that through these books (and other end times books) Christians are drawing close to Christ and nonChristians are hearing the Gospel and many are accepting Christ!

Published by Thriftbooks.com User , 18 years ago
This book was well worth a read, i was so excited in getting it the day it came out that i ended up finishing it in a few hours. If you are already an avid fan of this great series you will not be disappointed with the 11th installment, it has everything you are expecting and then some. Enjoy it.

Published by Thriftbooks.com User , 18 years ago
The LEFT BEHIND SERIES is one of the best series of Christian books I've ever read, and certainly, it's one of the best end times fiction series, although IN HIS IMAGE and THE CHRIST CLONE TRILOGY by James BeauSeigneur are also good. So far, the series has zoomed since book one, when the rapture occurred and those "left behind" were forced to grapple with the implications of missing friends and family members. I love this series, and I can't wait for the conclusion. Left Behind fans should also read CONQUEST OF PARADISE. It does in one book what Left Behind has taken many to do, and the book presents ideas for the possible rise to power of the antichrist that I've never heard before. If you even like the LEFT BEHIND SERIES just a little bit, then you'll love CONQUEST OF PARADISE! I'm looking forward to reading ARMAGEDDON. It should be one of the most exciting books in the series.
Copyright © 2020 Thriftbooks.com Terms of Use | Privacy Policy | Do Not Sell My Personal Information | Accessibility Statement
ThriftBooks® and the ThriftBooks® logo are registered trademarks of Thrift Books Global, LLC