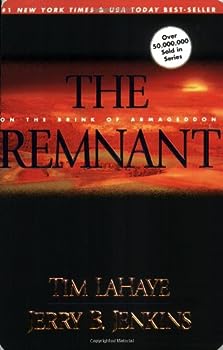 The Remnant: On the Brink of Armageddon (Left Behind)

Book 10 in the 12-book series that has sold over 63 million copies Read the books that launched a cultural phenomenon "This is the most successful Christian fiction series ever."--Publishers... This description may be from another edition of this product.

Published by Kimberly A , 4 months ago
Bought the used-good and it was very very good condition

Published by Ana P , 1 year ago
This item never arrived. All other 3 books were received.

Praise be to Jesus.... take me now lord

Published by Thriftbooks.com User , 19 years ago
This is the greatest story ever told by man (if you believe Jerry and Tim are men, I think they are prophets). This book has it all; suspense, God, devil, hell, and action galore. This is what we need more of in the world... good wholesome Christian violence stories. Stories that show kids how they will burn for not believing in the lamb. How can we convince people to believe in our dogma if we can't give them consequences for their actions. This is the perfect holidat gift for the atheist in your home. It will teach them a lesson in the vengeful and murderous side of our everforgiving and loving God. I am glad to be Christian in this time of year, but if things don't start changing to the Christianity side here pretty soon in this country I am gonna have to convert or something. I need salvation and spite in my life. Christians use to be the baddest kid on the block, now it is Islam. They understand religion over there, kill for the lord. Just like the tribulation forces and Nicolae. It won't be long now... Christian soldiers will soon unite and end the world in a firey blaze of glory. Glory be to God and Merry Christmas!!

Is the book's purpose to please man or God?

Published by Thriftbooks.com User , 20 years ago
I am a born-again, spirit-filled believer and I have been diving into every single book by LaHaye and Jenkins. The first book was so good that I couldn't put it down. Others such as Tribulation Force and Nicolae, didn't appeal to me as much, neither did The Indwelling. I continued to read every series, however and I enjoyed reading both Assasins and Desecration. As a result, I was looking forward to The Remnant. And it did not disappoint.I will admit, it took me a while to finish this book because it was quite boring in the beginning. However after you get past the first few chapters, the book definitely takes off. I read 200 pages in the last three days and finished the book last night.Each of the remaining characters getting into one situation after another and I could get a clear picture of the chaos that was described. From the time of the bowls of wrath, I was flipping my Bible to Revelations 16, while I was reading the book.People, you need to enjoy the book for what it is...Christian non-fiction. This as well as the other series are just two men's interpretation of the end times. If you don't agree, fine. They never claimed to know detail-by-detail what was going to happen. The most important thing is that through these books, they have been able to convince people to give their hearts to the Lord. Regardless if they're dead wrong, people are thinking, people are continuing to read these book series and people are accepting God's precious gift of salvation.God Bless LaHaye and Jenkins and I hope that each book fulfills God's purpose.

A Definite Must Read

Published by Thriftbooks.com User , 20 years ago
I just finished the 10th book in the Left Behind series, The Remnant. Tim LaHaye and Jerry Jenkins will not let you down in this installment. It spans alot more time than the other books in this series which usually only cover a month at a time, but this one covers quite a few months if not a year. Once I picked this book up I wasn't able to put it down until I was finished. The story line will definitely keep you on your toes and turning those pages to find out what happens next. Carpathia has become something of a madman, as if he wasn't one already, but even he goes over the top in this book. You'll get follow the adventures of the majority of the Tribulation Force as they try to prepare for the Glorious appearing that is about 3 years away and swiftly approaching. Again, time flies by swiftly in this book, and yet, it doesn't. You can spend two chapters just covering 2 days, and then skip several months while every one lays low. I highly recommened anyone who loves the Left Behind series to go buy this book ASAP!!

The Remnant -- some great material yet remains!

Published by Thriftbooks.com User , 20 years ago
For those who think I'm one of the millions of die-hard Left Behind freakazoids who believe that Tim LaHaye and Jerry Jenkins simply can do no wrong, I beg to differ. I was sorely disappointed with book 9's abandonment of everything I had liked about the series' preceding volumes. All of a sudden, every single character sounded the same; they made the same kind of wisecracks even in the most stressful apocalyptic situations -- archangel appearances, oceans turned to blood. Everything went too fast. Nothing was described -- just dialogue, action narrative in a somewhat-stilted style. What the heck did Petra look like anyway? Most readers have never actually been there, after all. ...(In retrospect, I think what threw me most about book 9 was its sudden expansion from four to five principle viewpoint characters -- Rayford, Buck, David, Leah, Tsion -- to well over a dozen. But that may be just because I'm a picky reader and I want everything to be perfectly consistent. ...)But I have to give a full five stars to The Remnant. Somebody, perhaps the archangel Michael, must have gotten to the author(s) and voiced all of my same concerns about the series' declining literary quality. ...In The Remnant, the cast of viewpoint characters grows even more, and half of the thing is devoted to the (attempted) rescue of one believer hostage. But still, everything is much better. Of course, the book does begin somewhat predictably. After all, if all these millions of people are trapped in the canyon-walled ancient city with no hope at all, no way out except by a miracle, what do you think is going to happen? Probably a miracle. Noteworthy, though, to "secular" readers: don't think the authors "cheat" with miracles. This book has more of the miraculous than any of the previous -- and yet it seems to stay plausible!But my major beefs about the series' preceding novel are all but eradicated. The characters act differently, and seem to speak in different ways. They don't all sound like the author this time -- and now they aren't as handy with awesome comebacks during stressful apocalyptic situations, such as being at gunpoint.The Global Community forces, especially Leon Fortunato, are not buffoons -- now they've received intelligence injections, they're big and scary, formidable foes.When things happen, they're described! Finally, we "see" the oceans/blood from the air. When freshwater rivers turn to blood, we see them ... we know what people are wearing, what their hair and skin looks like ... we "feel" the heat from the scorching Fourth Vial Judgment. The author(s) actually use italics, capital letters -- the narrative gets excited about things. When people die, you feel the hurt this time.So way to go, authors. And readers, get this book -- if you put down Desecration halfway through, don't continue to be disillusioned: just retrieve it and finish it quickly, then pick up The Remnant and prepare to be pleasantly amazed. As far as I'm concerned, the series has now
Trustpilot
Copyright © 2022 Thriftbooks.com Terms of Use | Privacy Policy | Do Not Sell or Share My Personal Information | Accessibility Statement
ThriftBooks® and the ThriftBooks® logo are registered trademarks of Thrift Books Global, LLC