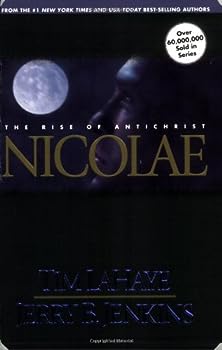 Nicolae: The Rise of Antichrist (Left Behind, Book 3)

(Book #3 in the Left Behind Series)

Book 3 in the 12-book series that has sold over 63 million copies Read the books that launched a cultural phenomenon "This is the most successful Christian fiction series ever."--Publishers... This description may be from another edition of this product.

Published by Kathy S. , 9 months ago
I ordered this book in acceptable condition. This book came marked with ink, torn pages and what appears to be red juice or something spilled on it while also appearing to have been completely wet at some point. I didn't even want to touch this book.

Published by Steven Koch , 3 years ago
We received a book in Spanish.

Published by Thriftbooks.com User , 13 years ago
I read this book in English and bought it for my grandfather to read in Spanish. It is a great story. Yo lei este libro en Ingles y lo compre para mi abuelito en espanol. Es una gran historia.

This series just keeps getting better

Published by Thriftbooks.com User , 19 years ago
This is easily the best of the first 3 books in this series. It is hard to put down once you start. Much more action and adventures in this one. Unfortunately for me, I know how this one turns out. I read Book #4 Soul Harvest first, by mistake, and now, I have had to back track. If you do the same thing, do not fret. Books 1, 2, and 3 are just as exciting even with what I already knew. I can't wait to finish the rest of the series. Good vs. Evil and no matter what, those who believe in the Bible teachings, know the Good guys win. It doesn't get any better than that!!!!

One of the Two Best

Published by Thriftbooks.com User , 21 years ago
I've been a fan of this series since the second book came out. I found the first one slow at times, but they get better (mostly). Then I read a review that said the Christ Clone Trilogy by James BeauSeigneur is a whole lot better, so I tried it. The review was more critical of Left Behind than I would agree with, but it was 100% right about the Christ Clone. Man, that's a series you can sink your teeth into. It moves fast, sticks to scripture, and explains prophecy in a much more believable way than any of the end times books I've read, including Left Behind.The strangest thing is that BeauSeigneur does such a good job of presenting the antichrist that you actually find yourself pulling for him. It's weird, but exactly as Matthew 24:24 says it will be. In Left Behind you know that Nicolae is the Antichrist right from the beginning (though the characters seem a little thick-headed in not being able to see what's so obvious to the reader) and there's no way in the world I would ever follow ol' Nick. If I weren't a Christian, though, I'm sure I would follow BeauSeigneur's Antichrist. He's that good, I mean bad . . . oh you know what I mean.One other big difference is that Left Behind is obviously written for a Christian or near-Christian audience; the preaching is pretty thick and I think turns off many nonChristian readers. (I've tried to get nonChristians to read Left Behind and none have read past the first book.) The Christ Clone Trilogy is written for a secular audience (it even has an occasional curse word) but when the truth is revealed (book 3 of the series) the Christian world view and the presentation of the Gospel is unmistakable.

This was an awesome book...could not put down!

Published by Thriftbooks.com User , 23 years ago
I read the first book of this series and also the second. I was riveted to the pages of this one. I find the author soaring me through the pages, impatient to find out what happens next. Although the story is fast moving, I find myself thinking about it's message. This is the first religious fiction I have attempted and I am impressed! I am anxiously awaiting the arrival of Book #4! This is a thrilling book, a thrilling series!
Trustpilot
Copyright © 2022 Thriftbooks.com Terms of Use | Privacy Policy | Do Not Sell or Share My Personal Information | Accessibility Statement
ThriftBooks® and the ThriftBooks® logo are registered trademarks of Thrift Books Global, LLC