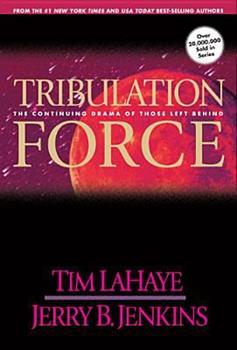 Tribulation Force: The Continuing Drama of Those Left Behind

(Book #2 in the Left Behind Series)

Rayford Steele and Cameron ("Buck") Williams find themselves pressed into service for the man they believe could be the Antichrist. Nicolae Carpathia takes over the United Nations, signs a peace treaty with Israel, and begins to lure the nations of earth together to form one global village. Meanwhile, the judgment of God begins to fall on the earth. Buck and Rayford, along with their pastor and Rayford's daughter, must fight to stay alive and battle...

I love this series!

Published by Thriftbooks.com User , 4 years ago
The left behind series gets better and better! You'll find exactly what's in revelation. If you're looking for an end times series this is the one.

An awesome picture of times to come....

Published by Thriftbooks.com User , 22 years ago
Tim LaHaye and Jerry Jenkins have written another great book in the "Left Behind" series. The authors make the Book of Revelations come alive. After reading this book, I ran and got out my Bible and looked up these verses. This book is a must read if you are curious about end-times.

Published by Thriftbooks.com User , 22 years ago
After reading "Left Behind," I immediately dove into "Tribulation Force." This book shifts into a higher gear and the plot moves more quickly than that of "Left Behind." The relationships between Rayford, Buck, Chloe, and Bruce become much more defined and as the tribulation force is formed, the battle against evil begins! As Nicolae Carpatihia continues his rise to power, the members of the tribulation force find themselves drawn into his service with no apparent alternatives. They vow to fight to the end!As I continue to read the reviews of books in this series, I am disappointed that a lot of people are still writing about disappointments in religious interpretations. I guess that is normal since everyone has different beliefs. Try to keep in mind that this is a fiction novel! It is not the Bible...

Published by Thriftbooks.com User , 22 years ago
I always considered myself a good Christian, until i read this book. This series has led me to re-evaluated my relationship with christ and now amidst many non believrs I sit here idly calling myself reborn. This book will make anyone do the same. As for people not raised in the church it proves as great fiction but for all of us who are raised in the church this series will bring new meaning to your faith.

Stronger in faith and beliefs

Published by Thriftbooks.com User , 23 years ago
I have completed book #2. I like the references to The Bible because I do not have a full knowledge of passages and verses. This makes me want to know exactly what The Bible is saying about topics relating to the Anti-Christ and other chapters relating to expectations in this world. I do believe that Tribulation Force talks about the challenges faced by Buck, Chloe, Rayford, Bruce, Loretta, etc. during those times. It may be something to agree or disagree with if it were truly real. I know and like the idea of the mixture of truth and fiction. Tribulation Force makes you see the importance of strengthening your faith, beliefs and asking questions that need answers. I am presently finishing up book #3 showing how Nicolae starts to show who he really is. People in Tribulation Force thought that Nicole was the best that might ever come along. He was so perfect, and that was part of the problem because he led everyone to think he was "perfect." They believed he was The Messiah. He wreaks havoc over nations and has people doing things they do not even recognize as wrong. He delights in his power. Some of the same things could be happening in this day and age. I am certain there are Nicole's (as in the Left Behind series) in this world and may be hard to recognize.The Left Behind series started with a referral from a friend. Once I started it, I have told others and they are wrapped up in the books. None of the books are to be taken, in my estimation, literally. The references to The Bible are fact, but the interpretation may not be. It gives me a reason to go and read further; it gives me more basis to listen carefully when our minister is giving his sermon and each book makes me strengthen my faith. I, along with many others, think the Left Behind series is excellent. The first book was introductory, and the Tribulation Force starts to build this incredible picture of 'good vs. evil.' One really can read and make a choice has to which appeals to them. I will continue to read the rest of the series and wait for the others to make their appearance.
Trustpilot
Copyright © 2022 Thriftbooks.com Terms of Use | Privacy Policy | Do Not Sell My Personal Information | Cookie Preferences | Accessibility Statement
ThriftBooks® and the ThriftBooks® logo are registered trademarks of Thrift Books Global, LLC