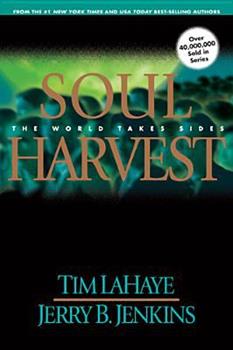 (Book #4 in the Left Behind Series)

The fourth book in the popular Left Behind series from Tim LaHaye and Jerry B. Jenkins is now available in trade softcover. In "Soul Harvest" the world is reeling from a great earthquake. As Nicolae Carpathia begins a worldwide rebuilding campaign, his rage is fueled by an evangelistic effort resulting in the greatest harvest of souls the world has ever seen. Meanwhile, Rayford Steele and Buck Williams search for their loved ones who haven't been...

Published by Thriftbooks.com User , 14 years ago
Great! The entire series is wonderful. The authors had to have a special inspiration from God in putting together the details. I listened to this about 6 years ago and again this month--today, I can see the progression of earth's events--just as depicted in the audio. One suggestion: would like to have had musical effects and sound better balanced--small parts were barely audible others overwhelming. Overall...I would definitely recommend it--and would listen again!

It's Going to Happen

Published by Thriftbooks.com User , 22 years ago
To all those criticizing the writing style, you're missing the point. For years, men have ignored the Book of all time. LaHaye and Jenkins have woven a story of intrigue that would reach all ages and levels of intelligence. But the bigger picture is that they're telling the story in modern-day terms because the days are short. This has made the book of Revelation live for me as never before and I was raised in the church. I'm sure it has gotten the attention of many who are re-thinking their values and getting their lives in order. A big thank you to the authors for making it so plain!

Another in a great series...

Published by Thriftbooks.com User , 22 years ago
After putting my wife off for several months to read 'Left Behind,' I have quickly raced through the first four books in the series, ending recently with Soul Harvest.This book matches the intensity and excitment of the prior three installments, using the environment outlined in the Book of Revelations to tell the continuing story of Rayford Steele, Buck Williams and the rest of the Tribulation Force.Without giving anything away, this installment has enough twists and turns to keep the reader interested from start to finish. Oddly, being a Christian and knowing where all of this is going, does nothing to dull the excitement of following the story as it develops.The vivid writing of Lahaye and Jenkins makes it possible to visually put yourself into the scene and almost experience the subject matter firsthand.If you are a believer and have not read any of these books, you are not doing yourself justice. These are great writings and do a great job of bringing the Word of God to life in a new and vibrant manner.
Copyright © 2020 Thriftbooks.com Terms of Use | Privacy Policy | Do Not Sell My Personal Information | Accessibility Statement
ThriftBooks® and the ThriftBooks® logo are registered trademarks of Thrift Books Global, LLC