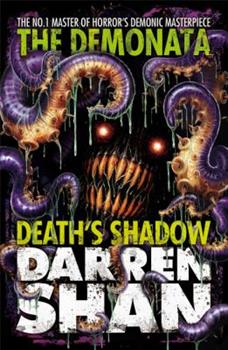 (Book #7 in the The Demonata Series)

The apocalypse came and the world burned. But it wasn't the end, and out of the destruction, new life has emerged. Bec is back to face the Demonata. After centuries of imprisonment, she's more... This description may be from another edition of this product.

Published by Thriftbooks.com User , 12 years ago
So, Grandma freaked out when she saw the cover and the name of the series. I assure you, the hero is fighting the bad guys and it's not satanic or anything. My son loves this series and has read each book very quickly. He says they are hard to put down.

Best in the series!

Published by Thriftbooks.com User , 13 years ago
An amazing, wonderful, brilliant, genius, original, splendid read, which will keep it's readers hungry for more and on the edge of their seats. This book had so many twists, and it was action-packed with a whole bunch of amazing features you can only get from the master of horror: Darren Shan

Published by Thriftbooks.com User , 13 years ago
As always, thrills and chills are felt in this next installment in the horrifying and gripping THE DEMONATA series. Bec has returned, and what aches her the most, besides adapting to the newest technology of the always-changing world, is having to deal with Dervish and the miles of questions surrounding his deceased nephew, Bill-E. Although this does frustrate Bec extremely, no time is to waste as werewolves and demons attack the house and the hospital that Dervish ends up in. They are once again reunited with Juni Swan, who escapes to a powerful ship that has the magic in aiding Dervish and Sharmila. Arriving at the ship, the group becomes trapped, surrounded by demons and their leaders, Juni and Lord Loss, who has now embodied Cadaver. Here the battle begins, and surviving just does not seem possible at all, especially since a demon stronger than Lord Loss is now upon them. Deeper and darker than ever, Darren Shan continues his series with the infamous gory details and action sequences. The battle continues in DEATH'S SHADOW between Dervish's clan and those serving Lord Loss, and fans will not want to miss any minute of it. Also in this installment, Beranabus' character becomes even more developed, as we get a closer look at his life before joining forces with Dervish. Reviewed by: Randstostipher "tallnlankyrn" Nguyen

Published by Thriftbooks.com User , 13 years ago
At the moment, the Demonata is one of my favorite book series. Even though it was written for a younger audience I still find it very interesting because of the simple way in which it was written. "Death's Shadow" left you really wanting more in the sense that you wanted to know more answers than questions. This series really has been very entertaining for me and I can't wait for the next book :D

Published by Thriftbooks.com User , 13 years ago
"I felt myself drawn to the dead boy. As my spirit seeped into his corpse, I found myself capable of restoring the body's functions. ...Bill-E drew breath...and so did I. My first free breath after sixteen hundred years of imprisonment. No words can describe the deliciousness of that...but that's when my problems really began." Bec has been able to take over Bill-E's dying body and is now living with his uncle Dervish in Carcery Vale. She has assumed Bill-E's memories and can (reluctantly) relate many of Bill-E's thoughts to the grieving Dervish. Bec finds all of this very painful. She wants to move forward, to enjoy her new "being" and to continue the fight against Lord Loss and the legions of demons. Unfortunately, Dervish seems unable to see Bec for the strong, spiritual force she is and seeks her out only as a link to Bill-E. Being back among the living allows Bec access to Beranabus (now known as Bran). However, the old wizard has once again chosen to leave Bec behind as he and his assistants, Kernel Fleck and Grubbs Grady, enter the demon's universe to fight. He is protective of Bec (especially after her 1,600 years of imprisonment in the cave) and wants to save her from the hellish encounters. Another element comes into play as Beranabus knows that the combination of Bec, Grubbs and Kernel form the powerful Kah-Gash. Together, these three have the power to vanquish the demons that move to destroy them all. One of Dervish's old friends, Meera, shows up at the old mansion to help her dear friend heal from his recent heartbreak. In the process she helps open up the communication between Dervish and Bec. As Bec struggles to find her new place in this world, she also discovers that sensations she gets when she touches people help her pick up their life images. This, along with Bill-E's memories, almost overloads her during her adjustments. All of these things come into play when, at last, she is forced back into a position of fighting the demonata. Just as Bec, Meera and Dervish are feeling comfortable with one another, the house is invaded by werewolves. "The first of the creatures sticks its head around the corner. It's recognizably human, but twisted out of normal shape. It has unnatural yellow eyes. Dark hair sprouts form its face, and its teeth have lengthened into fangs. They look too large for its mouth." From here they are swept back into Lord Loss's realm. Not only do they face the brutal demonata again, but they discover that there is an even more powerful force known as the Shadow overseeing the potential destruction of the human race. Joining forces with Beranabus, the Kah-Gash and other friends face brutal horrors and death together. Not everyone will survive. DEATH'S SHADOW is just as bloody and exciting as the previous books in Darren Shan's series. Fans are absolutely going to love it! With twists and turns the action heats up to an exciting climax. We can't keep it on our shelves, and as always, there's an eager audie
Trustpilot
Copyright © 2022 Thriftbooks.com Terms of Use | Privacy Policy | Do Not Sell or Share My Personal Information | Accessibility Statement
ThriftBooks® and the ThriftBooks® logo are registered trademarks of Thrift Books Global, LLC