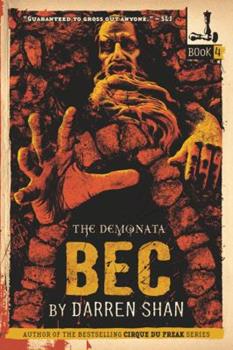 (Book #4 in the The Demonata Series)

As demonic Fomorii ravage their land, Bec and a band of warrior companions leave their devastated rath to answer a plea for help. An orphaned priestess-in-training, Bec hopes the journey will help her solve the mysteries of her birth. But fighting demons has a steep price...

Published by Thriftbooks.com User , 4 years ago
I love how there is a little love story within the story line and it keeps you wondering what would have happened if the guy comes back to Bec.

Published by Thriftbooks.com User , 13 years ago
This was by far my favorite in the Demonata series, i couldn't put it down.

Published by Thriftbooks.com User , 14 years ago
The 4th book in the series introduces a new character Bec living far in the past. Was very scary and satisfing and all though no my favorite still very good.

Published by Thriftbooks.com User , 14 years ago
My son and I devoured the Cirque du Freak books, and now we're just as quickly going through this series as it comes out. This book is different from the earlier books, but it's a good read!

Nothing can prepare the reader...

Published by Thriftbooks.com User , 14 years ago
Found dead on the outskirts of the rath's walls, Bec's mother has struggled desperately to get her baby to safety. When the villagers find them, they take the child in as one of their own. Questions haunt them, however, as to where the young woman came from and why she risked everything to bring her little one to their village. Through the years, Bec also wonders about her mother and her own role. Will she ever be able to find out the secrets of her heritage? Will she ever understand fully the strange dreams and powerful magic that seem to grow in her with every passing day? From an early age there seemed to be recognition that Bec is someone special. By many she is regarded as a priestess. Now much of her time is spent learning magic and trying to understand the chaos and evil that threaten the lives of this little band of humans. As Bec grows older, the danger around them escalates. They are at war with the "foul legions of the Otherworld." The Formorii, as they are called, are flesh-eating demons, made up of ghastly body parts and spirited by the evil and ultimate demon, Lord Loss. The demons are bent on the total destruction of mankind. They are at war to destroy anything good, spiritual and human on earth. One day their village unexpectedly receives a visit from a distraught boy who appears highly agitated and only responds with the words "Run Fast." He seems to want Bec and her people to come with him. Bec and a few of her rath decide that this is the best thing to do --- in fact, Bec feels a magic in the boy and the spirit of her mother telling her to go. With much trepidation, they form a small envoy of warriors to follow Run Fast, to kill as many demons as possible and in some way to help mankind. The adventures that follow are both shattering and terrifying for the little group. Between attacks from demons, the deaths of some of their fellow travelers and startling revelations about Bec's heritage, the group is tested. But the real revelation comes when they meet the Druid, Durst, and discover that he has Bec in mind for a very special and dangerous mission: A tunnel has opened between this land and the Otherworld. It will allow demons to enter our realm freely. It's a small tunnel but it's growing. As it grows, larger, smarter, stronger demons will cross. They can roam the land by day as well as night. And, as I've already told you, they can only be killed by magic. Nothing can prepare the reader for the things that follow and the ultimate surprising conclusion of this disturbing saga. Darren Shan has really pushed the envelope in this fourth installment, with its over-the-top blood and gore. Some readers will be shocked and disappointed (I know I was), and some will be disgusted, but everyone will be absolutely riveted for the next book in the Demonata series. --- Reviewed by Sally M. Tibbetts

Published by Thriftbooks.com User , 14 years ago
I have a child who has become an extremely avid reader because of the darren shan books, cirque du freak, and the demonata series. He absolutley loves to read and cant wait to get his hands on the next one coming out in November. In the mean time, he reads the other books over and over while he patiently awaits a new book. Thank you!!!!
Copyright © 2020 Thriftbooks.com Terms of Use | Privacy Policy | Do Not Sell My Personal Information | Accessibility Statement
ThriftBooks® and the ThriftBooks® logo are registered trademarks of Thrift Books Global, LLC