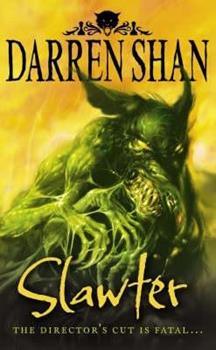 (Book #3 in the The Demonata Series)

This description may be from another edition of this product. Nightmares haunt the dreams of Dervish since his return from the Demonata universe, but Grubbs takes care of his uncle as they both try to continue a normal, demon-free existence. When a legendary...

Could not put it down!

Published by Thriftbooks.com User , 14 years ago
I picked this book up, read for an hour, and tried, in vain, to stop reading, and get some rest. Needless to say, it didn't work, and for the next hour and a half I read, until I had finished the book. For anyone who was disappointed by Sons of Destiny (from the Cirque Du Freak series) and The Demon Theif (I know I was), this should be a relief. Not only does Shan write an a more compelling story than the last one, but he finally seems to have lightened up a bit. I know that seriousness was necessary for the end of the Cirque Du Freak series, and for the last book, narrated by another character (I won't say who, just for anyone who hasn't read it yet), but it was still nice to see Grubbs back, as sarcastic and witty as ever. Pretty much, when something goes terribly wrong on the set of Grubb's favorite horror movie director's newest set, he, Dervish, and Bill-E are forced to confront Lord Loss once again. It sounds cliched, and like it shouldn't be good at all. Trust me on this one; it is. While only the last chapter or so (seemingly) has anything to do with the rest of the series, this was still a good read. Definitely lighter than the last few by Shan (they have the potential to get dark, if not for the almost unfailing sarcasm of his main-characters) and also better woven, with (a few) twists and turns in the plot, this is definitely a good read.

Published by Thriftbooks.com User , 14 years ago
My son got me turned on to Shan's Cirque De Freake series. When I saw the first Demonata book come out I snatched it up and absolutely loved it! I had the pleasure of meeting Mr. Shan when he did a book signing and reading in Seattle and I must say he was the nicest guy, so I might be a little biased when reviewing his books. I tend to want to support those who are just amazing people. However, the Demonata series is worth the read, all three books are fantastic (read them in order), they are scary, gruesome at times, but Shan has an incredible creativity that breathes life into his characters and plot just when you think everything has already been done.

A fast-paced and terrifically gruesome story

Published by Thriftbooks.com User , 14 years ago
It's a demon. Five long, spindly legs. The body of a giant ant. A long neck and the head of some sort of rabid monkey. No arms, but several small mouths in addition to its main one, sticking out of its body, set on mushroom-like stalks. The mouths are filled with blood-red, dagger-sharp teeth. Here he goes again! Grubbs is back, but unfortunately so is Lord Loss. So many good things are happening in the life of Grubbs Grady --- his Uncle Dervish seems to be recovering from the last demon encounter; he, Grubbs and cousin Bill-E are becoming closer; and to top it all off, they are consulting with the great director, Davida Haym, on her newest movie. Maybe life is going to settle down for them. At least this is what everyone wishes. On the movie set, Grubbs begins to grow very suspicious about a lot of things. The film Davida is working on is just too close to home. She wants to make a horror movie to end all horror movies, and demons are the main theme. In the very first demon scene, Grubbs knows there is trouble afoot --- that demon looks too familiar and is much too realistic. He is assured time and again that everything and everyone is just fine. There is absolutely nothing to worry about --- it's all movie magic, latex and great costumes. Even Uncle Dervish feels that Grubbs is totally overreacting. But is he? Soon, people are missing and Grubbs is picking up a distinct pulse of magic. Magic becomes possible for Grubbs only when he is exposed to a dangerous demon situation. Finally, in a desperate attempt to prove that he's right, Grubbs and his friends search for the hot spot of activity on the movie set. Demons don't appear out of thin air. They have to be summoned. Their universe has to merge with ours. A window or tunnel between worlds has to be opened...there has to be a place where they crossed. A secret place. A place nobody but their human partners can get into. Their gruesome and heartbreaking discovery convinces Grubb's friends that the Demonata has indeed returned. Now everyone must be told, and they need to run while there is still a chance. Unfortunately, it might be too late because Lord Loss and Davida have formed a pact. Who else will have to die now? This time we find that Grubbs has learned he has amazing magical powers. While these powers serve him well in fighting the demons, he is a reluctant participant because he knows what it means: I can't escape. The universe of the Demonata will call to the magic within me and suck me back in. I know it will. This isn't over, not by a long shot. Darren Shan once again has created a fast-paced, terrifically gruesome story. Fans will not be disappointed by the blood and mutilations in this third of the series, because by now readers know just what they will be getting when they tackle one of the Demonata books. Just when you think it can't get worse, it does. We will find out more in May 2007 when the fourth book in the series, BEC, comes out. Better practice some magic! ---

Published by Thriftbooks.com User , 14 years ago
First of all, you have to read the first two books: Lord Loss and Demon Theif. The third book is so action packed and scary. This book is full of foreshadowing and you won't even see it coming you want to read it to the end. Its amazing. These are one of my favorite books, it sucks you into reading other scary books, and i love it. Darren Shan writes with a touch of Stephen King, which makes it a unique way of writing. I am almost finished with "The Girl Who Loved Tom Gordon" and it is scary and awesome. I got sucked into this book because of the Demonata series. READ THIS SERIES AND YOUR PERSPECTIVE OF READING WILL CHANGE IN A GOOD WAY! this reading is for all ages.

Published by Thriftbooks.com User , 14 years ago
Wow, I gotta say that this book was much scarier than the last two. Maybe it was because I was reading the book late at night. I was reading the book near 9pm until 2 in the morning because it was so hard to put down....... very addicting, but after I finish reading the book, I started to see weird things in the house, the book gave me weird ideas that demons are everywhere, but then again, I do have a wIn the middle of the story, it was kind of confusing, but then you have think real hard on what iild imagination for a 18 years old college freshmen. ^-^ There is this one part in the story where it might be confusing for you. It did for me, but I understood what Mr.Shan was trying to do. For some reason, I see the Demonata serie as the the children version of Stephen King's books, but this is so much better!! Maybe it is because I am highly obssessed with demons and vampires. (^-^) So what are you waiting for? GO BUY IT!!
Copyright © 2020 Thriftbooks.com Terms of Use | Privacy Policy | Do Not Sell My Personal Information | Accessibility Statement
ThriftBooks® and the ThriftBooks® logo are registered trademarks of Thrift Books Global, LLC