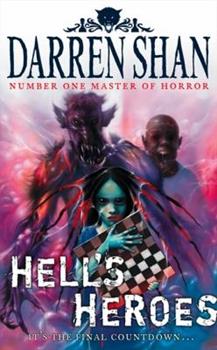 (Book #10 in the The Demonata Series)

This description may be from another edition of this product. Beranabus and Dervish are gone. Bec has formed an unholy alliance with Lord Loss. Kernel is blind, held on Earth against his will. Grubbs is mad with grief and spinning out of control. The demons are...

Published by Thriftbooks.com User , 11 years ago
Under Death's guidance, the demons have banded together and launched an assault on Earth. Their reward if they triumph will be the obliteration of mankind, control of our universe, and immortality. Since we last saw Grubbs Grady, things have not gotten better. The demons have found openings to the world. Lord Loss is in his glory. Grubbs is exhausted and heartbroken over the trail of blood, brutality and loss that crowds the world around him. He is desperate to stay on task, to do everything possible to defend what is left. He can hardly remember being a boy because his wolf side has had to take over just to survive: "I'm not in close touch with my human emotions these days. I've become a detached, brutal excuse for a person." He is numb, scared and angrier than he's ever been. He has lost his parents, his half-brother, Bill-E, Meera, Beranabus and a host of others. Now his Uncle Dervish lies dying in his arms with one last message to him: "Don't become a monster. Remember who you are, the people who love you, why you fight. Beranabus acted inhumanly, but he was never fully human to begin with. You were. You are. Don't lose track of that." But Grubbs is in a fight for his life and the survival of mankind. It is not time to let this monster go, and if it takes over, so be it. His chances --- the chances of any of them surviving --- are slim to none. There is no place in a demon-run world for humans. There is no compromise with the Shadow growing stronger. In order to go on, he does need help. So he calls on his old buddy, Kerne, who has the power to open and close the windows that will give them access to other worlds. He is the second person in the demonic weapon known as the Kah-Gash. Next is a girl named Bec, the third person they need and, unfortunately, now a prisoner of Lord Loss. If they can rescue Bec and if Kernel is willing to use his magic, there might be a chance. Kernel, though, has some issues with Grubbs --- and rightly so. In order to keep the boy from running away, Grubbs has clawed his eyes out. Though he has made sure that Kernel has been well taken care of in a hospital, and even has a bodyguard for him (the Disciple Kirilli), Kernel is angry. So when Grubbs shows up with his werewolf bodyguards, Kernel is not pleased. It takes a lot of convincing, conniving and the promise that, as soon as they can rescue Bec, Kernel can then decide what to do. The fact that his eyes can be restored by magic in the other worlds is also an attraction to him. With trepidations and great mistrust, Kernel is pulled into this mission --- a mission he is convinced is ill begotten. Grubbs has a brief moment of hope. They can locate the lodestones (used to open tunnels between the demon universe and humans), rescue Bec, and then, as the Kah-Gash, take their last stand against the Demonata. Everything changes in the blink of an eye when Grubbs has a nightmare about Bec and Lord Loss. In his dream he sees Bec not as a prisoner of Lord Loss,

Published by Thriftbooks.com User , 11 years ago
This whole series is great and is quite fun to read. I teach English, and I have recommended this to several reluctant male readers in my class, and they eat it up. I only wish I had something else to recommend when they finished this!

Published by Thriftbooks.com User , 11 years ago
One of the best books I've ever read. Combines gruesome horror with undiniably funny humor. I just can't get enough of Shan's books!

Published by Thriftbooks.com User , 11 years ago
Super fast delivery, came a day early even, perfect condition. Not to mention a great book.
Copyright © 2020 Thriftbooks.com Terms of Use | Privacy Policy | Do Not Sell My Personal Information | Accessibility Statement
ThriftBooks® and the ThriftBooks® logo are registered trademarks of Thrift Books Global, LLC