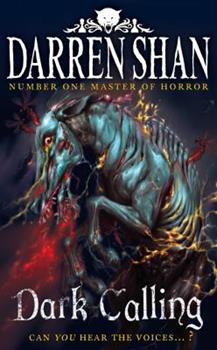 (Book #9 in the The Demonata Series)

This description may be from another edition of this product. I know it's ridiculous. Lights can't whisper. But I swear I heard a voice calling to me. It sounded like static to begin with, but then it came into focus, a single word repeated over and over....

My teenager loves this series

Published by Thriftbooks.com User , 11 years ago
So, Grandma freaked out when she saw the cover and the name of the series. I assure you, the hero is fighting the bad guys and it's not satanic or anything. My son loves this series and has read each book very quickly. He says they are hard to put down.

Published by Thriftbooks.com User , 11 years ago
The Demonata Series its amazing, I had to order the last installment through a different site, because its not available yet in the US, but Darren Shan its a great writer, his plot driven characters are amazing, and this book in particular was one the the best in the series....

There are unexpected twists, gory battles, blood, guts, and plenty of spilled entrails

Published by Thriftbooks.com User , 11 years ago
I fall, moaning and screaming, but not crying --- I no longer have eyes to weep with. The creatures that were spat into my eyes are munching on my brain now. I try to scrape them out with my fingers, but that just adds to the torment. This is Kernel Fleck's story, told in his voice as he and the Kah-Gash try to face down one of their worst nightmares ever. Plunged into a world of demons and darkness, Kernel, Beranabus, Grubbs and Bec are desperately trying to keep Lord Loss and his Demonata minions from taking over the world. They thrust wildly from one window to the next, fighting what seems a futile battle. Their losses are great, their army is small, and their resources are so weakened that they are on the verge of losing heart. Kernel has had his eyes torn out and maggots are eating his brain. Blood is everywhere. This is just the beginning --- or, more likely, the end! In the universes they move between, the Demonata seem to dominate one and the Kah-Gash another. But there is yet another place, and Kernel is suddenly on a journey to "The Crux," a common point between the two universes. An "Old Creature" guides and holds him captive as he relates the fantastic history of these worlds and their connection with Atlantis. The creature --- who has assumed the body of Kernel's younger brother --- will not yet reveal why Kernel has been chosen for this journey but instead takes him farther away from the Kah-Gash and the battles that are yet to be fought. It leaves his friends in great peril, and all Kernel can do is try to figure out how to get back...before it's too late. Although Kernel is finally able to escape back to his friends, he almost immediately seeks to return to the Crux. Because of new knowledge gained from the Old Creatures, Kernel believes that Bec poses a threat. Bec, who has been a strong force for the group, may unknowingly have come under the powers of Lord Loss. And to make matters worse, they have also lost the beloved and mighty mage, Beranabus, who for thousands of years had guarded the portals between worlds. Now, their group consists of Grubbs, his weakened uncle Dervish, and Kirilli, who's not exactly known for his bravery. How can this underpowered and overwrought group combat the encroaching horror of Lord Loss and the Shadow? Grubbs's cry says it all: "...we have to try. Everyone's depending on us. Meera died for this. Dervish will be dead soon, too. Beranabus and Bill-E. All the others who've given their lives. They can't have died for nothing. We fight on until the demons kill us all. Only then do we stop." Darren Shan does not let his readers rest a minute in this whirlwind bloodbath between the Demonata and Kah-Gash. There are unexpected twists, gory battles, blood, guts, and plenty of spilled entrails. Fans are going to love it and be all the more anxious for the 10th and final book, which is certain to be a treat. All I can say is that I sure hope the right side wins! --- Reviewed by Sally Tibbetts

Published by Thriftbooks.com User , 12 years ago
This book has a magnificent plot where the whole series ties together in a handful of twists. But, even though many mysteries are solved brilliantly, a couple more mysteries arise, leaving the reader hungry for the next installment. Very unique and it must of taken Darren a long time to write

Published by Thriftbooks.com User , 12 years ago
It was as good, if not better, than the books that came before it. The end leaves you feeling quite melancholy though. (Also, I loved that I got it early :D It was awesome!)
Copyright © 2020 Thriftbooks.com Terms of Use | Privacy Policy | Do Not Sell My Personal Information | Accessibility Statement
ThriftBooks® and the ThriftBooks® logo are registered trademarks of Thrift Books Global, LLC