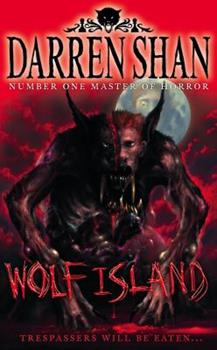 (Book #8 in the The Demonata Series)

This description may be from another edition of this product. As the mysterious Shadow builds an army of demons, Grubbs Grady and his team search desperately for answers. But when they follow up a new lead, it takes them to an old, unexpected foe - the Lambs....

Have been reading the whole series

Published by Thriftbooks.com User , 11 years ago
I love this series, i just wish the books were longer. They go so fast.

Published by Thriftbooks.com User , 11 years ago
I bought this book for my 14 year old son. He has read all the books in the series so far. He loves these books and the author. Any book that gets my son excited to read is a great book to me!

Fans Will Love Every Gore-Filled Minute

Published by Thriftbooks.com User , 12 years ago
The last thing that Grubbs Grady would ever want to do is to face the lycanthropic family curse. He knows what his heritage entails, and being a werewolf is one of them. Dangerous and overpowering, this is a side to his personality he tries hard to suppress. Little does he know that in this phase of fighting the relentless Lord Loss and the mysterious Shadow (can they be one and the same?), he will actually confront himself as never before. In this eighth book of the popular Demonata series, Grubbs's worst nightmare is realized. As Grubbs, Beranabus and Kernel are fighting demons in one world, Dervish, Bec and his league are engaged in their own battles. Though Dervish is his uncle, for Grubbs, he is much more like a father. Dervish has been weakened by years of attacks, and the last encounter resulted in too much strain on his heart. When Meera and Shark come through a "window" and inform them that Dervish and Bec have been attacked by werewolves, there is no hesitation for Grubbs as he and the other Disciples are off to the rescue. Going through another magic window leads them into a hospital spattered in bloody gore where Grubbs finds Dervish: There's a demon on top of him, shaped like a giant insect with a golden shell. It's snapping at Dervish's face, mandibles grinding open and shut.... Though he is able to rescue Dervish, he sees the weakened state he is in and knows that time is not on their side. Grubbs also discovers that while Lord Loss is behind these attacks, there seems to be a definite connection with the Shadow. Other questions need to be answered because the werewolves are being bred for specialized destruction. Prae Athim and the Lambs are involved, but how far have they gone? There is no question that the Disciples must gather in force and rid the world of these particular terrors. Shark helps put together what they laughingly refer to as "The Dirty Dozen," which includes one of the geekiest of persons named Timus Brauss. It is Timus who ends up being the surprise safety package for them. Between Grubbs, Shark, Meera, Kernel, several carefully selected Disciples and the skills of Timus, they are indeed a force to deal with and so their hunt begins. Though they find the building Prae Athim has used, they discover that she is not there and that operations have been taken over by a slick, smooth-talking man known as Antoine Horwitzer. Horwitzer claims that Prae Athim is missing, and he has been put in charge. To their horror they discover that an army of werewolves are being mutated, animals are being cruelly experimented on by the hundreds, and worse, the Disciples have been led into a trap. There are unbelievable battles ahead, terrible losses and gobs of blood and guts along the way. Naturally, or unnaturally, the zombie --- like Juni Swan --- appears (now always under the command of Lord Loss) and attacks Grubbs (who is more werewolf than ever) in one of their most horrific battles ever. I slam her to the floor and driv

Published by Thriftbooks.com User , 12 years ago
My son has all 12 of the first series and 8 of this one. He has been reading them since the 5th grade and still is interested in them even though he is a freshman in college. He plans on getting the final 2 books as they come out.

Published by Thriftbooks.com User , 12 years ago
Grubbs Grady, along with Beranabus and Kernel, are hunting down demons to extract any information about the Shadow, when a window opens and Shark and Meera step out. There has been a werewolf attack and Dervish is seriously injured. In order to hunt down Prae Athim, Grubbs switches places with Dervish and along with Shark and Meera, they search for Prae. In this latest book, there will be deaths. Some of them are loved ones. Grubbs wolf side is once more released, and things get bloodier than ever before. WOLF ISLAND is the eighth book in the Demonata series. Just when I didn't think the series could get any better, it does. WOLF ISLAND is proof. Warning though - this book is a bit thin, but don't let the size fool you. It's completely amazing and so horrific that you will keep reading straight through until the end. I couldn't put it down.
Copyright © 2020 Thriftbooks.com Terms of Use | Privacy Policy | Do Not Sell My Personal Information | Accessibility Statement
ThriftBooks® and the ThriftBooks® logo are registered trademarks of Thrift Books Global, LLC