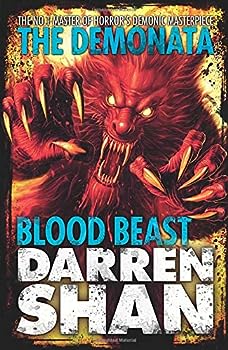 (Book #5 in the The Demonata Series)

This description may be from another edition of this product. Grubbs Grady has so far escaped the family curse, but when he begins to experience alarming symptoms at the onset of the full moon, he is scared that the jaws of fate are opening and about to swallow...

Published by Thriftbooks.com User , 12 years ago
This was a REALLY good book! The story-line wasn't as good as the others, but it was very twisty and well-written, one of the best in the series (and that's saying a lot!)

Published by Thriftbooks.com User , 12 years ago
All of Darren Shans books are amazing, and this ones just as fun as the other ones in the Demonata series!

Published by Thriftbooks.com User , 12 years ago
Grubbs is affected by the family curse, a wolfen gene, causing with to gradually turn into a werewolf. Earlier on in the Demonata series, Bill-E was affected by this curse, and Grubbs and Dervish had to fight Lord Loss to free him. This time though, Lord Loss won't be generous and help Grubbs. Grubbs has to fight it because if the werewolf in him comes out, it will fuse with his magic and because nearly unstoppable. Months after the demon attack at Slawter, Juni comes to Carcery Vale and starts working as a school guidance counselor. She starts helping Grubbs with the nightmares he has been having about his dead sister, Gret and about being a werewolf. She also is helping him cope with another one of his friends dying. Out of all of the Demonata series thus far, this one has been the most rewarding. It's hard to believe this series keeps getting better and better, but it does.

Published by Thriftbooks.com User , 13 years ago
when i started reading the first book of this series i could not put it down and ended up reading it by the end of the day. i am usually interested in these types of books where there is magic demons and other types of fighting and horror. when i finished reading this one i was very anxious to go on and read the next one. my favorite aspect of the book is the authors way of writing the scene in a way that puts the image in your head of what you just read. i recommend this book for readers 12 and older who are interested in fantasy and horror.

Published by Thriftbooks.com User , 13 years ago
Reviewed by Karma Barry (age 13) for Reader Views (1/08) "The Demonata: Blood Beast" has an excellent plot with something new around every page. Darren Shan has a creative way of combining suspense, humor and fear so that you will want more, but at the same time will be wary to continue should you want to sleep with the lights off. I would suggest "The Demonata" series for vampire/werewolf/horror-loving teens of about age 13 or 14 and up; also possibly age 12, and maybe 11; below that and there may be restless nights and/or nightmares involved. Luckily, I don't have any experiences that could relate too closely to those of the characters involved. But even if there are things that would be the same, it would probably be fashion sense or appearances. I'm not sure who that's unfortunate for, me or the characters. I hope that there are more books for this series and whole-heartedly encourage Shan to write more books in general. I can almost certainly be sure of one thing concerning future books by Shan-- I'll be reading the first page undoubtedly followed shortly by the last! After facing dangers of all kinds, teenager Grubbs Grady will have to face the worst thing yet - his self! Horror and suspense will collide as he gathers strength from within himself, and strange things happen around him in "The Demonata: Blood Beast."
Copyright © 2020 Thriftbooks.com Terms of Use | Privacy Policy | Do Not Sell My Personal Information | Accessibility Statement
ThriftBooks® and the ThriftBooks® logo are registered trademarks of Thrift Books Global, LLC