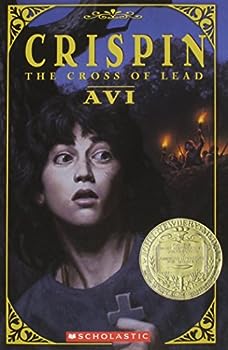 Crispin: The Cross of Lead

(Book #1 in the Crispin Series)

Falsely accused of theft and murder, an orphaned peasant boy in fourteenth-century England flees his village and meets a larger-than-life juggler who holds a dangerous secret.

Published by Thriftbooks.com User , 14 years ago
The author of this book is AVI The book name is CRISPIN Book is about a 13 year old boy. Who never had a father or mother? He his mother died. He had heard something that he should not have heard. And now he had become a wolfs head. Witch means kill on site for twenty shillings he had a friend of the family help him out. He is a priest had helped him UN till he died and Crispin met a man and they had went on some crazy adventures. I would recommend this book to others who like adventure and ancient days.

Let Me Have a Soul, That I Too May Sing and Dance.

Published by Thriftbooks.com User , 16 years ago
"I keep asking myself if I felt different, if I was different. The answer was always yes. I was no longer nothing." What's so important about a name? Does it give you something? Does it lay out a path for you to follow? Does it tell you who you are? Crispin doesn't know his name because his father died years ago in the plague. "Asta's Son" is all anyone has ever called him. Doing their best to survive in meager conditions, he and his mother live among the poorest of the poor in fourteenth-century medieval England. Until his mother dies. Then, on a midnight trip to Father Quinel's quarters to learn the truth about his father, Crispin interrupts John Aycliffe, the steward in those parts, meeting secretly with a strange man in the forest. Next thing Crispin knows, Father Quinel has been murdered and people are trying to kill him. He is labeled a Wolf's Head, which means anyone who finds him can kill him without impunity. On the run from everything relating to his prior life, without a name or a plan, he is stopped by an enormous man who calls himself Bear. In exchange for letting him live, Crispin if forced to vow service to Bear as his Master now. Where this will take Crispin, he doesn't know, but he isn't sure he wants to find out. People are still hunting for him, but why? And how will he ever find a new life under these conditions? Avi's CRISPIN: THE CROSS OF LEAD tells the heartmoving story of a young boy in search for his name, and not just any name, a name he can live by. Set against the backdrop of medieval Christianity, Crispin's prayer is this: "Let me play the music well. Let me be a credit to my master. And I beg Thee, let me have a soul, that I too may sing and dance." Reviewed by Jonathan Stephens

A Boy Learns His Name

Published by Thriftbooks.com User , 19 years ago
To be honest, I'd never read Avi before even though he has written some very popular novels. But I make it a point to read every Newbery Award-winning novel so I read this book. Now I feel like I've been missing out and should go back and read more of this author. This is a very good book.Avi's novel tells the story of a young boy of fourteenth century England. He is a nameless, fatherless boy who becomes a fugitive when he is falsely accused of a crime on the very day his mother dies. Inadvertently becoming the servant of a strange entertainer named Bear, he slowly learns the truth of his world and himself. Forced to make some interesting choices at the climax of the novel, the nameless boy surprises the reader by becoming Crispin--but not in the way that might be expected.If I seem cryptic, it's because I don't want to give away the wonderful twists at the close of the story. Avi has written a wonderfully readable novel which I would recommend to any reader.

This One Blew Me Away! Avi's Best

Published by Thriftbooks.com User , 19 years ago
I've been a fan of Avi's wonderful books for a long time. Some such as The True Confessions of Charlotte Doyle and The Fighting Ground were big favorites when I was younger, and I still love returning to them from time to time. I was really excited when I learned that Avi had finally won the Newberry medal with Crispin The Cross of Lead, and having read it, I think that this is his best. The story follows Crispin, a young peasant in the Middle Ages. The death of his mother and some mysterious surrounding circumstances force Crispin to flee his home with some powerful people trying to kill him. He falls in with Bear, a traveling juggler who becomes a father figure, who helps Crispin in his flight to happiness.Everything is perfect about this novel. Crispin and Bear are well-characterized, and their relationship is truly touching. The plot has a lot of action and is quick paced. Primarily, the book is great for the way it deals with pain. Crispin's faith and perseverance in the face of extreme pain is amazing and is a remarkable message for children (and adults) in these difficult times. I can't say enough for this book. It definitely deserves the Newberry. I hope Avi writes fifty more books this good.

Published by Thriftbooks.com User , 20 years ago
CRISPIN: THE CROSS OF LEAD is a thrilling and endearing tale, unquestionably my favorite book of Avi's from the bunch I've read. (This is, in fact, his fiftieth book.) CRISPIN is set in 1300s England. Not only is the story steeped in the history of feudalistic medieval Britain, but Avi brings that history to life most vividly without ever once hitting you over the head with it. "Time was the great millstone, which ground us to dust like kerneled wheat. The Holy Church told us where we were in the alterations of the day, the year, and in our daily toil. Birth and death alone gave distinction to our lives, as we made the journey between the darkness from whence we had come to the darkness where we were fated to await Judgment Day." CRISPIN is the name of the 13-year-old peasant main character; although, the only name he's known for himself is "Asta's Son." That is until his mother dies, and in his blinding grief he stumbles upon a secret meeting in the woods between John Aycliffe--the steward of the manor--and a wealthy stranger. In a flash he finds himself the target of a plot in which he is falsely accused of a theft and declared a "wolf's head," allowing anyone to kill him on sight. On his way "out of town" the village priest tells the boy his real name, tells him to hide out for 24 hours until he can round up some provisions, and promises to reveal some more vital information the next day. Then the priest proceeds to get his throat slit and Crispin is on the run with the theft AND the priest's murder hanging over him. What happens to him is one of those stories that is so well crafted that you can taste and smell the settings, as well as hear the sinister growl in Aycliffe's throat, as you anxiously wait for something to go right for Crispin. While trying not to reveal any more of the story, I'll also tell you that there is a character in here who I find darn near as lovable as Hagrid. I hope that Avi is contemplating a sequel to this one--the end came way too soon for me. Richie Partingtonhttp://richiespicks.comBudNotBuddy@aol.com
Trustpilot
Copyright © 2022 Thriftbooks.com Terms of Use | Privacy Policy | Do Not Sell or Share My Personal Information | Accessibility Statement
ThriftBooks® and the ThriftBooks® logo are registered trademarks of Thrift Books Global, LLC