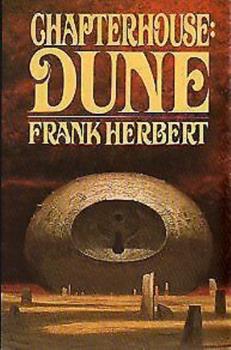 This description may be from another edition of this product. Frank Herbert's Final Novel in the Magnificent Dune Chronicles--the Bestselling Science Fiction Adventure of All Time The desert planet Arrakis, called Dune, has been destroyed. The remnants of the...

Published by Thriftbooks.com User , 14 years ago
The Honoured Matres are taking over the galaxy, with the new Bene Gesserit leader, with the help of Sheeana the sandrider, are making a new Dune out of their stronghold planet. Murbella, the turned Honoured Matre, lover of Idaho, is training with the Bene Gesserit. Plot and counterplot happen between the two competing female organisations, and Duncan Idaho, Miles Teg and a Tleilaxu are all important. At the end, we realise the Honoured Matres have come back here in fear or an enemy out to get them, and several of the important characters are together in a spaceship.

Published by Thriftbooks.com User , 15 years ago
I have had this and all the other dune books for many years I have read all of them so many times and each time I find something that I missed in this book you find that there is a sub plot about the scattering that you never thought about and it makes you wonder if Mr Herbert was going to write one more book about dune If you are a real fan this is a must book for your collection

Published by Thriftbooks.com User , 20 years ago
Frank Herbert dedicates this, his last novel, to the memory of his beloved wife Bev who while he was writing the book. Not long after finishing Chapterhouse Dune, we lost Frank Herbert as well. His death ended one of science fiction's best series of novels. His son Brian has created several prequels based on Herbert's notes, but no one really can replace the wonderful writing style that made the Dune series so unique.Chapterhouse Dune is the final, apocalyptic battle between the Bene Gesserit and their bastard offspring, the Honored Matres. In Heretics of Dune, the previous novel, we meet the Honored Matres for the first time. One of them is captured and converted (but how thoroughly) to a Bene Gesserit. Meanwhile, Darwi Odrade, Mother Superior, fights to save what little is left of the Bene Gesserit planets. We get a much closer look at Bene Gesserit training from the inside, life on their secret Chapterhouse Planet and a hint of greater forces at work behind the scenes. The ending is equivocal; either Herbert intended another novel to answer these questions, or he deliberately left it open for us to fill in the blanks.Either way, this is an exciting conclusion to the Dune Series and along with Heretics, one of the best novels in the series. If you are curious which books can be read in what order, you can read God Emperor, Heretics and Chapterhouse as a single trilogy, or just Heretics and Chapterhouse. Of course, if you are impressed by Herbert's Dune series, you will want to read them all in order: Dune, Dune Messiah, Children of Dune, God Emperor of Dune, Heretics of Dune, and Chapterhouse Dune. In addition, Brian Herbert has added Dune: House Atreides and Dune: House Harkonnen, which are "prequels."

The end of a triumph of humanity...

Published by Thriftbooks.com User , 20 years ago
For almost half a year I read Frank Herbert's six DUNE books. When I started out with DUNE, I only read it because I loved the David Lynch movie. But I was hooked. Now, it's all over. No more DUNE for poor me. Oh sure, there's the Brian Herbert & Kevin J. Anderson DUNE books, but they're nothing compared to the brilliance of Frank Herbert. Don't get me wrong, they're good in their own respect, but they lack the depth & meaning that the original six had.I wasn't sure what to expect from this novel, as one of my favorite DUNE characters Miles Teg had been killed, and Dune itself destroyed. But thankfully, Frank Herbert's magic is readily apparent. Not only do you get to read an incredible story, but you get to amass a wealth of knowledge about humanity that no Humanities class could ever teach.I would've loved so much to find out more about those people Duncan see in his visions, but I probably never will. It's too bad, that would've made a great book.Many people have talked about how unfinished the DUNE legacy is because Frank Herbert died before he could write another book, but I think it better this way.Frank Herbert's imagination gave us the DUNE universe, and by not finishing it, I think he gave us a doorway into that universe, to interpet as we see fit. We can use our own imagination to finish what Frank Herbert started, and that's perhaps the greatest gift Frank Herbert could ever give.

waiting vainly for the sequel...

Published by Thriftbooks.com User , 21 years ago
I read the first of Dune series 14 years ago, and had no conception of the breathtaking distances that the author would take towards the "last" book of the Dune Chronicles. While it is conceivable that someone with sufficient patience can read Chapterhouse Dune and fully appreciate it with no other Dune Chronicles exposure, it would seem criminal to recommend this book to someone without ensuring they had read the first five beforehand. Or, for something of a treat, read Chapterhouse, and then jump to the first five as "prequels"! I recently did something similar when I read the second and third Dune Chronicle books for the first times in 14 years, having reread the last two books in the last few months: quite an enthralling effect! The hardest part of reading this book was coming to the ending, and feeling selfishly deprived regarding the prospect of finding out What Will Happen Next as a result of the author's death, which in turn came shortly after the death of his wife following a long fight with cancer. Herbert created an astonishing world of breathtakingly evolved characters and contexts to appreciate them in. I have reread this book and others of the series numerous times. As is the case for meeting interesting characters in real life, it is poignant getting to know these characters only to lose the ability to anticipate being in touch with them later on, to find out how they're doing... The formidable detail and richness of perspectives is such that while reading it I was at times fearful of discovering a gimmick or a cliche to undo the trance worked by the book. This never happened. The publishing of the Dune Prequels is quite exciting in itself, and I hope that somewhere in the late elder Herbert's notes, are some detailed indications of SEQUELS, future Atreides audacities, Bene Gesserit contemplations and plotting, and passionately drawn characters to fall in love with and be fascinated by all over again.
Copyright © 2020 Thriftbooks.com Terms of Use | Privacy Policy | Do Not Sell My Personal Information | Accessibility Statement
ThriftBooks® and the ThriftBooks® logo are registered trademarks of Thrift Books Global, LLC