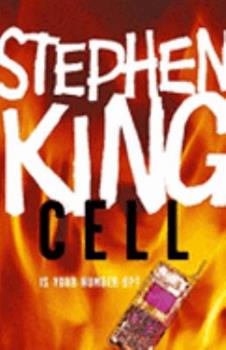 This description may be from another edition of this product. From international bestseller Stephen King, a high-concept, ingenious and terrifying story about the mayhem unleashed when a pulse from a mysterious source transforms all cell phone users into...

Published by Aimee , 1 year ago
It's in Spanish was not on description when I ordered

One of my favorite novels.

Published by Thriftbooks.com User , 3 years ago
Disliked?? Nothing, ever!!! I just loved the story line, cliff hangars, and of my most favorite things about Stephen King's writing is how extremely descriptive he is!!

Published by Chastity Johnson , 4 years ago
Stephen King never disappoints, and this is no exception. Good story, easy read. Humor and gore with a few endearing moments.

Stephen King shows 'em how it is done!

Published by Thriftbooks.com User , 15 years ago
In the last couple of years there has been a surge of zombie or zombie-esque movies: Dawn of the Dead, Shaun of the Dead (loved that one), Resident Evil, 28 Days, etc etc. By default, most zombie movies are pure garbage: unbelieveable ridiculous and completely laughable. Cell seems to be Stephen King's answer to all this. it is as if he said, "Stand back boys, and I'll show you how it is done!" While most people see this as a departure from his usual style, I see it as a return to it. The characters are well developed, but instead of being developed in the past like in most of his books, the characters actually develop during the course of the book. The Pulse causes the characters to discard the people they were before and form themselves into someone new. Those who can't discard their previous mentality end up committing suicide, unable to cope with the shift in reality. Adapt or die is the rule for the world after the Pulse. As usual, King manages to focus on the humanity in the middle of terror. The characters seem so real, with the fears, loves, and phobias of normal people. A nice twist to the zombie theme is the "evolution" of the Phoners. Instead of redundant "avoid the zombies, blow them up, etc etc", King adds a new twist the story by letting the phoners change and learn, making them even scarier in the process. Some of their powers are pretty far out, but hey! it's his imagination, just go with it. Be forewarned, there are a couple of things left to the reader's imagination in this novel: how the Pulse started and the entire resolution of the story. Some poeple complain about this, and at first I was a little ticked off. However, because of these unaswered questions, I find myself still pondering this novel. Unlike other novels which I read then forget about the characters, this one will be in my thoughts for quite some time. Also, not telling how the Pulse started serves to keep the story on a local scale instead of worrying about the whole world. This novel is about the fight of one man and the people he meets along the way, not the fate of all humanity. With communication broken down, no one would know what caused the Pulse. This make the story so much more real to me. As with most of the GOOD Stephen King books, I am thoroughly creeped out (I was freaked out by drains after reading "It" for years). Last night, at my son's Little League baseball game, I took a greater notice everytime someone's cell phone rang or they made a call. Instantly I thought "What If" and pictured those people instantly going nuts and tearing through the crowd (I unfortunately have a vivid, sick imaginagtion). To me, this is the mark of a truly great novel, that it affects your thought process in your everyday life. I highly recommend this novel and hope for more great stories from Stephen King.

Published by Thriftbooks.com User , 15 years ago
Thank you Mr King all the elements of a really really good story...This is pre-1987 King and I love all the parts of the book. As usual, Zombie concept takes a twist in King's mind- not death but scrambled brains. The ending is usual if you have been reading King for a long time...And I certainly agree with him: It is not the destination but journey that makes it very worthwile to read..Waiting with Lisey's story holding my breath!

Better than the normal King..

Published by Thriftbooks.com User , 15 years ago
You gotta love anyone who can come out of retirement and publish a book like Cell. Stephen King has reverted to his roots...well maybe even regressed beyond that. Cell is truly gory by even King standards. I also felt a continuing comparison with the Stand as I read Cell, though Cell may not be at intelligently done as the Stand. Clayton Riddle is in Boston signing a deal with the unthinkable happens....everyone on the Cell has they craniums cleared, leaving only agressive and murderous impulses. Riddle single mindedly heads for home to try and save his wife and son. That's where the story ends. Wonderful characters (typically King) and a tight plot makes Cell and sure fire winner. How many weeks will this one be on the bestseller list? I do agree with another reviewer who is critical of the ending, but the end of a rollercoaster ride is always anticlimatic right? Read this if you have the guts.

Published by Thriftbooks.com User , 15 years ago
What Stephen King does best is to take the familiar and make it really creepy. (What is more familiar than the cell phone?) Sure the CELL is formulaic,sure it incorporates multiple clichés of the horror genre, but for those Stephen King aficionados the CELL delivers as promised. In recent literary attempts, King shuned the blood-soaked imagery that was the hallmark of his earliest--and best--works. With the CELL, King returns to his goriest horror roots. It isn't the masterwork of the Green Mile, nor the small-town slice of life of Stand By Me, nor is it the misguided mismash of The Colorado Kid,it is Stephen King and his rawest most unadulterated form. If you're looking for a fast raucous ride the CELL is worth the read.

Published by Thriftbooks.com User , 15 years ago
And I, for one, am glad King is still writing--even if I was nervous about picking up my cell phone for a couple of days! The editorial reviews tell you everything you need to know about the plot, so I won't repeat it here. When I read this book I saw comparisons to two novels; one of those books is Dean Koontz's "The Taking." Although the plots are superficially the same--a trip through a nightmare world--the books are very different in style, in tone, and in the "whys" underlying them. [Depending on your point of view, by the way, you'll find King's explanation either inspired or exasperating.] The comparisons to the zombies of George A. Romero's movies are fairly obvious, but the descriptions of human life after the Pulse, for Clay and his band of struggling "normies," and of non-human life, if you will, for the "phoners," reminded me of a more classic novel, Richard Matheson's "I Am Legend." [King has noted his admiration for Matheson in the past, and, in fact, "Cell" is dedicated to Romero and Matheson.] What scared me most about this novel, as with "Legend," was the fact that everything in the book felt like it really *could* happen here. And that plausibility carries through to the ending. It's difficult to write an ending for a book like this one, but King managed to write one that makes sense without false optimism (as the book's prologue notes, most of America is dead by the time the book ends) *or* unnecessary pathos. All in all, King fans will be thrilled by this book; as an added bonus, it also includes an excerpt from King's next novel, "Lisey's Story" (due out in October 2006), which I am now eagerly awaiting.
Copyright © 2020 Thriftbooks.com Terms of Use | Privacy Policy | Do Not Sell My Personal Information | Accessibility Statement
ThriftBooks® and the ThriftBooks® logo are registered trademarks of Thrift Books Global, LLC