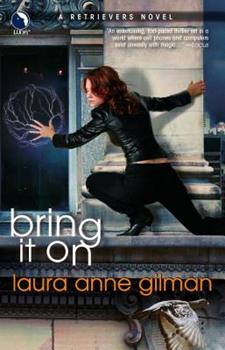 Bring It On (Retrievers, Book 3)

(Book #3 in the Retrievers Series)

Nobody said juggling a career and a relationship would be easy... Wren Valere used to have a simple life. Her partner Sergei would negotiate the terms of the Retrieval -- all right, the theft -- and she would use her magical Talent to carry it out. Paycheck deposited, on to the next job. Now? Her relationship with Sergei is even more complicated (sex will do that). Her fellow lonejacks are trying to organize against the Mage's Council. The nonhuman...

Published by Thriftbooks.com User , 13 years ago
Usually I get bored by the third or forth book in a series, but not with this series. Each book is better than the one before it. You really get into the characters and the romance that is developing. And you really need to start with the first book.

Published by Thriftbooks.com User , 14 years ago
Bring it On picks up the story right after Curse the Dark. Wren is still in grieving over *spoiler* over Less's death. However there are more important matters at hand. There is a battle growing between the fatae, Talent and the Council. The Council is getting stronger and the Talents and fatae are still refusing to work together. But Wren is determined to try to get everyone to work together for their survival depend on it. Wren's relationship with Sergei continues to grow more and more. She also decides to take on a simple retrieval case on her own without Sergei's help something she has never done before. But it is a Null who comes to Wren asking her to retrieve an item that is strangely odd, something that a Null shouldn't know about. Overall a good book and it's ending sets up the upcoming battle that is to come.

Can't wait for the next book

Published by Thriftbooks.com User , 15 years ago
Excellant book. Can't wait for the next Retriever adventure. I hope there will be a lt more coming out.

Published by Thriftbooks.com User , 15 years ago
This is the third book in the Retreiver series and it just keeps getting better! In this one, Wren decides to take on a project without Sergei, her business partner, manager and lover. After all, it's just a simple job. Nothing is simple any more and Sergei is keeping his own secrets as well. There's something going on at the Silence and he's trying to keep himself and Wren out of it while holding the Silence to their promise to protect Wren. PB, Wren's demon friend, has an agenda of his own, trying to promote harmony between the Fae, the Nulls and the Lone Jack Talents. Unfortunately, there's Lone Jacks missing, Fae dying and the hate groups rising. The Council (which rules the Talents and the Lone Jacks ignore)is definitely involved as well. Between Wren & Sergei's attempts to make their relationship work, the "simple job", the problems with the Silence, the clashes of the Fae/Human/Talent and Wren's attempts to calm everyone down when her talent makes her "invisible", this is a very exciting book. This is a well written series. The characters keep evolving. I can't wait for the next one!

Published by Thriftbooks.com User , 15 years ago
Wren Valerie is a Retrieval Artist (some might call her a thief) who is a Talent using a charge of power, many times electrical in nature to use her magic. Her latest case involves Anna Rosen, a Null (a human with no talent) who wants Wren to retrieve a piece of jewelry that is in her stepmother's possession even though it belonged to Anna's mother. She accepts the job without letting her Null business partner and lover Sergei Didier know as a way of asserting her independence. Wren's attention is wrenched away from the job when it looks like the different factions in Manhattan are going to battle. The fatae (magical sentient creatures once though to belong only in fantasy or children's books) are the victim of human hate crimes, lonejacks, independent operators like Wren are disappearing and the fatae doesn't want to join forces with the lonejacks who have ignored them in the past. All factions think the Mage Council is behind the vigilante assaults, the disappearances and the forcible attempts to bring the lonejacks to heel. Wren proposes an alliance between the fatae and the lonejacks and is spearheading the unification believing they must to stand together to survive whatever the Council is planning. The latest Reviewer novel is an action-packed romantic fantasy in which different factions of the magical community make alliances in preparation for a possible war with the Mage Council. Laura Anne Gilman is in the same League as Laurell K. Hamilton, creating a world where humans, magical beings and Talents all know about each other and sometimes even mange to co-exist peacefully. Ms. Gilman is a great world builder who makes readers desire to believe her world actually exists. Harriet Klausner
Copyright © 2020 Thriftbooks.com Terms of Use | Privacy Policy | Do Not Sell My Personal Information | Accessibility Statement
ThriftBooks® and the ThriftBooks® logo are registered trademarks of Thrift Books Global, LLC