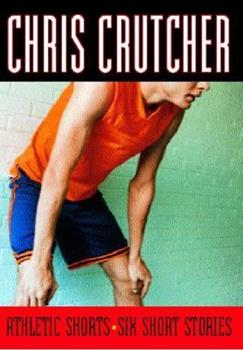 These six stories from acclaimed author Chris Crutcher are about athletes, but are not simply sports stories. Here he presents characters from some of his best-loved novels, as well as creating some unforgettable new personalities, in tales of love, death, bigotry, heroism, and coming of age. Ages 11+

Published by Thriftbooks.com User , 14 years ago
In ATHLETIC SHORTS, Chris Crutcher presents original short stories involving characters from his previous novels. In the book's forward, Crutcher explains, "In my travels around the country and in letters from readers, I am constantly asked what happens to certain characters in my books. So once in a while I check in" (pp. ix-x). Each of these short stories involves a central character from a previous novel, but, while Crutcher may have intended a particular story to be a prequel or an afterward, the stories remain independent. So a person who has not read RUNNING LOOSE will still be able to understand the storyline behind IN THE TIME I GET, in which Louie Banks looks into the eyes of a friend dying of AIDS and realizes the value of time. Additionally, after getting a taste of Crutcher's novels through his short stories, readers may well be inspired to go out and acquire the novels themselves. Athletics are the uniting theme throughout these stories, but they also give Crutcher a medium to introduce physical, mental, and emotional challenges for his characters. Sports allow a safe setting for conflict and failure, while also providing a site for characters to achieve and excel. Thumbs Up! Award Winner, 1992 Reviewed by: Mechele R. Dillard

Published by Thriftbooks.com User , 16 years ago
Even though Athletic Shorts is not my favorite book, it is still an exciting quick read. This is a book of six short stories that all relate to sports. Though all of the stories got my full attention, I will give you a quick taste of two that I liked most. The first story is call "The Pin", this is about Johnny Rivers who loves to wrestle, but the problem that Johnny's dad loves to wrestle just as much as he does. Johnny can't do anything good enough for his dad. So Johnny finds a way to prove himself to his dad. He challenges his dad to the mat. This next story is one to get your sense of humor up and running a little bit. In this story, "The Other Pin", Petey Shropshire is picked to wrestle Chris Byers. Chris is one of the best wrestlers in the state. The problem with this is that Chris Byers is a girl, and Petey doesn't want to get embarrassed and lose to a girl. Later Petey get together with Chris and they talk up a plan. This plan is made so that Petey won't get embarrassed and lose to a girl, and that no one with win the match. This plan is something that your going to just have to find out yourself. That was a little sneak preview of what good stories are in this book, now all you have to do is find out what happens in the other four stories. Chris Crutcher does a great job of being short and to the point with these stories. This is why I enjoyed reading this book so much. I would rather read six short stories that are about something that I like, than to read on long boring novel that I only read because I could use a couple extra points here and there. Now that's just my opinion, but if your like me and enjoy a good short story, than this is a perfect book for you.

Courage shown by the imperfect facing the impossible

Published by Thriftbooks.com User , 18 years ago
Another great book by Chris Crutcher -- this one containing six short stories with troubled or stressed teens facing difficult situations. The last two, on the themes of racial prejudice and sexual preference prejudice, are especially powerful.

Published by Thriftbooks.com User , 20 years ago
All of the stories in Athletic Shorts were good. But there are two them that I liked the best. Those two are Lion's story and Louie's story. Lion had kept so much of his anger inside of him due to the fact that one of his friends killed his parents in a boating accident. He didn't realize that he almost did the same thing to his friends one time when they all got drunk and went for a drive out on the ice. Louie's story was both heart- warming and emotional. Even though I didn't cry, I was on the verge of tears at some points. He befriends a young man with AIDS, and they become pretty close over the next couple of weeks.Trying to decide whether he should stay friends with Darren is a tough choice that he has to make. It doesn't help that his best friend Carter( who I think Louie really truly loves and cares deeply about as a friend) doesn't like Darren. That makes his choice even harder. Chris Crutcher really makes you feel what all the characters in the different stories are feeling. Whether it be wrestling your father for more than just entertainment, or dancing with the girl of your dreams, Mr. Crutcher really makes you feel you are there witnessing every moment as you are reading the story. That is what I like most about his books. Will there be a continuation of Lion's story anytime? I really like his story the best.

Most emmotive book you will ever read

Published by Thriftbooks.com User , 21 years ago
This book is categorized for "young adults," but I would recommend these stories as much to an 18 year old as I would to an 80 year old. Crutcher's stories address the most sensitive aspects of society without any form of restriction. Don't read this book if you want a sugar-coat. There is no holding back as Crutcher drills to the bone of prejudice and other societal struggles. From the light-hearted tale of overweight Angus Bethune (who has four gay parents) to the dramatic story of gay teen with AIDs, every one of Crutcher's true stories make their impression. You will never forget these characters once you have met them.
Copyright © 2020 Thriftbooks.com Terms of Use | Privacy Policy | Do Not Sell My Personal Information | Accessibility Statement
ThriftBooks® and the ThriftBooks® logo are registered trademarks of Thrift Books Global, LLC