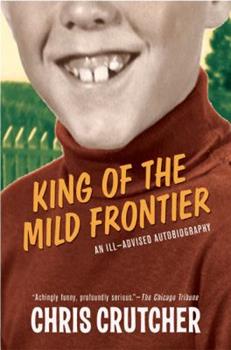 King of the Mild Frontier: An Ill-Advised Autobiography

ALA Best Fiction for Young Adults * New York Public Library Books for the Teen Age A riveting, scorching--and hilarious--autobiography by the award-winning author of Staying Fat for Sarah Byrnes and Deadline . From trying to impress a member of the girls' softball team (with disastrous dental results) to enduring the humiliation of his high school athletic club initiation (olives and oysters play unforgettable roles), Chris Crutcher's memoir of the...

Crutcher captures the joy and laughter of adolescence!!

Published by Thriftbooks.com User , 18 years ago
"Esus Saves," says Chris Crutcher in his absolutely hilarious book King of the Mild Frontier. Crutcher takes on an adventure through Cascade, Idaho and into elementry, high and into college. He shows us that the only way to get through hard times is to laugh. His rage and his obediance shows us that their is grass greener on the other side.Chris Crutcher was raised in Cascade, Idaho. This autobiography tells us many stories of Chris Crutcher. He had begun his life as a "bawlbaby" telling us that your not the only one that is or has a little brother that cries with or without an absolute problem. Chris had sit through 52 weeks of church at the Red Brick Church to get what he thought would be some action figure that blew up in you face doll. He got a glow in the dark plaque that read," Jesus Saves" He liked it just as much, his older brother John Crutcher, was messing with the plaque and accidentily broke the "J" of the plaque. It had now read, "Esus Saves" Chris now begun to cry stating that he was going to tell mom. This his said he had a secret to tell him. That Jesus had an older and wiser brother that thought up all the wise stuff. "No way," Chris had said. "Yeah, his name is Esus," John said. Next Sunday he had told everyone that Jesus had an older wiser brother named Esus.That was one of the many, many, many incindens he had with his brother and other people he had run amock with. This book is great for everyone who can enjoy laughing. This book got tied for the review of being"just a Young Authour" book. If your anybody, and I know there are some anybodies out there, read this book. It'll make your heart warm and yourself laugh.

Never Fails To Make You Laugh

Published by Thriftbooks.com User , 18 years ago
King of the Mild Frontier is hilarious. Chris Crutcher takes the reader back to Cascade, Idaho in his childhood, filled with humorous mishaps, tears, confusion and mischief. From being a Boy Scout Bawlbaby to losing the fourth of July bike race and giving the commentator a one finger salute... What does Chris have to say for himself? I like cookies.Whether or not you've read any of his other books (if you have, this will give interesting perspective on his characters and the man behind them), you'll enjoy this. I guarantee it. I'm giving it to my Mom and Dad to read next, it's not just for young adults.

Published by Thriftbooks.com User , 18 years ago
Chris Crutcher's autobiography, KING OF THE MILD FRONTIER is not just great for teens, it's great for EVERYONE -- and the perfect Father's Day gift for the dad who likes to laugh out loud. A top rate memoir about an author who's had his share of challenges, and yet come out of them better for the experience. Watch for Crutcher's star to rise in the next year. It's time this novelist was discovered outside of the YA confines. It's time he was a crossover author, floating to the top of the mainstream barrel. GREAT, GREAT stuff.

Published by Thriftbooks.com User , 18 years ago
" 'Wanna do something neat?' are four words that strike terror in my heart to this day. My answer was always yes when the question came from my brother. Then he'd tell me what the neat thing was, and it would always seem not so neat until he explained how what seemed like something that could really get you in trouble was, in fact, neat. Then I'd get in trouble." Chris Crutcher's outrageous tales of being a little brother, a young scholar, a doomed outdoorsman, and an athlete of questionable repute caused me to convulse with laughter to the point where my head started to hurt, and I began figuring that just one more story like the last one and I'd surely pee my pants. And lying just below the surface of this wacky World According to Young Master Crutcher is a sparkling mine full of poignant vignettes and profound-yet-simple truths about a youngster coming to terms with God, with death, with family, with intolerance, and with his place in the world. In KING OF THE MILD FRONTIER, Chris Crutcher goes on to talk from the heart about his idea of real heroes and reveals several brief (and heartbreaking) glimpses of his work as a child and family therapist. He gives us a look at his path to becoming a writer. By the time he's done, readers have a sense of how the experiences and revelations have melded together into those honest and gritty novels that we know and love him for, and which earned him the 2000 Margaret A. Edwards Award, honoring lifetime contribution in writing for teens. Chris Crutcher is a consummate storyteller. He's also a guy who knows how to slice through the crap that authority figures often try feeding to kids. Those two hundred plus pages of KING OF THE MILD FRONTIER: AN ILL-ADVISED AUTOBIOGRAPHY passed by much too quickly for me. Teens will be certain to eat this book up in a hurry and rush out to meet all of those characters he's brought to life over the past two decades.This is guaranteed to be on my Best of 2003 list! Richie Partington
Copyright © 2020 Thriftbooks.com Terms of Use | Privacy Policy | Do Not Sell My Personal Information | Accessibility Statement
ThriftBooks® and the ThriftBooks® logo are registered trademarks of Thrift Books Global, LLC