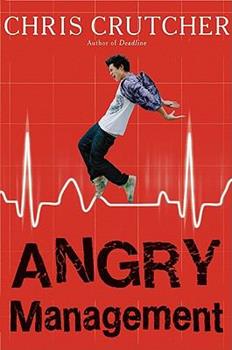 Chris Crutcher fills these three stories with raw emotion. They are about insecurity, anger, and prejudice. But they are also about love, freedom, and power. About surviving. And hope. Every kid in this group wants to fly. Every kid in this group has too much ballast. Mr. Nak's Angry Management group is a place for misfits. A place for stories. And, man, does this crew have stories. There's Angus Bethune and Sarah Byrnes, who can hide from everyone...

Published by Thriftbooks.com User , 11 years ago
Right from the prologue CC creates an amazing thought process. fascinating and fantastic. Three short stories and every one made me laugh or cry or both.

Published by Thriftbooks.com User , 11 years ago
Google Chris Crutcher, and chances are one of the first topics to pop up will be censorship. That alone is cause for this reviewer to pick up his books. A therapist and child advocate, Crutcher is one of the finest authors I've read for teens. He not only uses real experiences with real adolescents to form his characters, he hits young adult reality fiction right on. Crutcher is honest, straightforward, and not afraid to tackle the hard subjects coming-of-age lessons forge. And boy, do kids respond. ANGRY MANAGEMENT is Crutcher's latest novel. Built out of three novellas involving some familiar characters from past books, adolescents and grown ups alike who can't appreciate the honesty and raw emotion brought forth from these characters do so out of fear of today's reality. The novellas are connected by Mr. Nak's (IRONMAN, 1995, HarperCollins) Angry Management group, a place where teens who don't follow the norm meet to tell their stories. The stories they've lived from the cards they've been dealt. Anger is most definitely a theme in these pages, but so are love and prejudice, freedom of religion and abuse. Hope and survival. Crutcher has a way of pulling at the deep, raw emotion we all possess, especially for kids, and bringing it to the surface. No wonder so many find his work threatening. Reviewed by: Angie Fisher

Published by Thriftbooks.com User , 12 years ago
Chris Crutcher has done it again. He always leaves me wanting more of his characters and with this book he gives us more. just like all Crutcher books: Loved it loved it loved it!

Published by Thriftbooks.com User , 12 years ago
ANGRY MANAGEMENT contains new stories with characters from previous Chris Crutcher books. Crutcher explains in his foreword that he has been "...asked over and over again whether or not there will be a sequel to STAYING FAT FOR SARAH BYRNES or WHALE TALK..." He goes on to explain that he doesn't "...generally get the notion to write a sequel to a novel that I've already taken two years to write. But during those two years I always fall in love with my characters, and I loved revisiting some of them in this other, shorter form." Crutcher presents a tribute to his characters and his fans in this new book. Sarah Byrnes was physically abused by her father at a young age when he pressed her face against a burning stove. Then Sarah's mother abandoned her, leaving behind a girl emotionally and physically scarred. She sought after her mother once for an explanation, but left uncomforted and unfulfilled. Now with the help of Angus Bethune, an overweight and low self-esteem teenager with unconventional parents, Sarah once again seeks to confront her mother and find some closure. Along the way, they establish a stronger bond and perhaps fill an empty spot in each other's lives. The ending to their story isn't necessarily perfect, but that doesn't mean it's not happy. Montana West likes to push the envelope in everything she does. Whether it's fighting with her adoptive parents or writing articles on hot-button issues for the school newspaper, Montana is not afraid to speak her mind. When censorship from the school's administration rears its ugly head, she takes a break to write an article about the school's football team, the one topic in which she could care less. However, she doesn't expect to fall for bad-boy Trey Chase and his irresistible charm. Together they decide to fight back against the censorship of Montana's legalized marijuana article and run into the last person they thought would stand in their way: the chairman of the school board --- and Montana's adoptive father. Now Montana must decide where her loyalties lie and what she really believes. Marcus James has every reason to be angry. He not only happens to be one of the few black students in a prejudiced inland Northwest high school, he is also the only gay black student in a prejudiced inland Northwest high school. Marcus takes everything in stride, though, and is counting down the days until he can escape to college and a brighter future. One day he shows up to class with a pink noose hanging around his neck, and a hate crime is investigated by the administration in a sloppy, administrative way. At a school assembly where Marcus is singled out, an unlikely ally emerges in Matt Miller, state champion wrestler, who stands up against the moronic handling of the situation. Matt refuses to let the hate crime fall by the wayside, and Marcus is simply trying to survive another day. The ultimate outcome is not what either person expects. While die-hard Crutcher fans may be uneasy about the new

I couldn't put it down from start to finish

Published by Thriftbooks.com User , 12 years ago
I pre-ordered ANGRY MANAGEMENT months ago and have counted down the days till its release. Chris Crutcher, as always, does not disappoint. From the first story that utilizes past characters Sarah Byrnes and Angus Bethune, I was pulled into their lives intensely. It was genius to bring back the character of Mr. Nak to guide the reader through the lives of past beloved characters and a new one or two. I loved this book even more than DEADLINE, Crutcher's last book-- and that's saying a lot. This is another one I will be buying for my friends who care about kids, as well as those who just love a great story (stories, actually).
Copyright © 2020 Thriftbooks.com Terms of Use | Privacy Policy | Do Not Sell My Personal Information | Accessibility Statement
ThriftBooks® and the ThriftBooks® logo are registered trademarks of Thrift Books Global, LLC