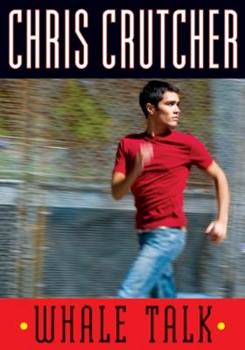 A varsity letter jacket: it's exclusive, nearly unattainable, revered . . . and everything that's screwed up about Cutter High, as far as T. J. Jones is concerned. That's why T. J. is determined to have the Cutter All Night Mermen the unlikeliest swim team a high school has ever seen earn letter jackets of their own. It won't be easy. For one thing, they don't even have a pool. They will fight for their dignity, they will fight with each other, and...

It takes a book this good for people to want to censor it.

Published by Thriftbooks.com User , 15 years ago
Chris Crutcher, Whale Talk (Dell, 2001) It's always the best books that poke their heads up over the radar, only to have them lopped off by people who just don't get it. Whale Talk is listed by the American Library Association-- the folks who put out those neat lists of books that inbred know-nothings feel the need to attack in school libraries (aka the lists of "this is what I'll read next" for thousands upon thousands of American high-school kids)-- as one of the ten most challenged books of 2005. This makes perfect sense, because Whale Talk is probably the best young adult novel I've read since I first discovered Philip Pullman's wonderful (and similarly challenged) trilogy His Dark Materials. T. J. Jones is a mixed-race high-school student in the Pacific Northwest, and he's also got something of an attitude problem. He's athletic, but ignores organized sports at his competition-rabid school until he sees the younger brother of a now-dead local hero getting pushed around for wearing his brother's letter jacket. Jones decides to retaliate by starting a swim team-- at a school that doesn't even have its own pool. He recruits a number of misfits (including Chris, the pushed-around, mentally challenged kid), lines up a coach, and sets out to, if not humiliate the sports freaks around him, at least show them that the outcasts can perform, too. What he doesn't expect is that the long bus rides to swim meets around the region will create a sense of camaraderie among them. The most important thing that makes this book so good is the characterization. Crutcher has filled his book with well-drawn, memorable, interesting characters who will keep the reader entertained for its duration. Dropping them into an amusing David-and-Goliath plot helps, but the real kick with the plotline is the way Crutcher drags in portentous events and makes them unpredictable; we expect some sort of great revelation, for example, when Crutcher dumps his busful of kids off the road in the snow, but instead gives us the far more practical outcome of a tow truck. It's little pieces of realism like this that keep the ball rolling along as well as it does. Yes, there is bad language. And yes, there is racism. It's not surprising when you're dealing with the only mixed-race student in an entire high school (especially one who refuses to play football or basketball). But then, that's one of the novel's big points-- that the racism T. J. encounters is not just the overt uses of the N-word, but the pervasive attitude that surrounds him. It's exceptionally well-done, which may be the root of the reason why the moronic contingent seems so scared of this novel. After all, the better you get your point across, the more that point is likely to scare those who fear your point. And in this case, Chris Crutcher has done a truly exceptional job. This one's likely to end up on my ten best reads of the year list. **** ½

Got a whale of a tale to tell you friends...

Published by Thriftbooks.com User , 17 years ago
A good book rises above its own premise. Reading a short synopsis of this story without knowing anything about it beyond its plot could easily suggest to the average viewer that it's going to be awful. Think about it. A multi-racial protagonist and his motley crew of rag tag misfits puts together an unlikely swim team and everybody learns a little bit about what it's like to walk in another person's shoes. Bleaugh! That's the kind of After School Special plotting that can get a book seriously ignored by its intended audience. Now I had never read a Chris Crutcher book coming into this. Frankly, I know the man has a reputation for producing darned good books. Then I read "Whale Talk" and found, to my incredible relief, that this was not really a book about a swim team. It's about the circle of abuse and the amount of control an individual has over his or her own actions. It's about hurting other people and what the cost of that can be. In short, the book takes amazingly gigantic themes, renders them bite size, and gives them humanity and humor. It's the humor part that really impressed me. T.J. Jones (actual name The Tao Jones... pronounce it, I dare you) is probably one of three people of color in his small Washington town. Adopted by his parents when he was a seriously abused toddler, T.J.'s a pretty well put together kid. That's probably in no small part due to his amazing mom and dad and his fantastic (some might say godlike) child therapist, Georgia. Which isn't to say that T.J.'s life is bereft of odd problems. His favorite teacher, Simet, is trying to lure T.J. into helping him start a school swim team. There are a couple problems with this plan. For one thing, T.J. refuses to join any organized sports. Cutter High School is run by and for its jocks. These jocks have been trying for years (unsuccessfully) to get T.J. onto one of their teams. Also, the school has no swimming pool. So T.J. isn't exactly thrilled about the idea of getting roped into this situation until he sees some of the local heavies beating up a mentally handicapped kid because he refuses to stop wearing his dead jock brother's letter jacket. Suddenly our hero has a mission, and the mission is clear. To create a swim team comprised of the kind of guys who otherwise could never be able to get involved in an organized sport. Even better, he's going to get each and every one of them a letter jacket. This is just the barest of outlines describing this book. T.J. has a lot going on in his life and this includes his father's guilt about accidentally killing a toddler some thirty years before, a girl who tries continually to wash her skin clean of pigment, her psychotic father who is both a wife abuser and T.J.'s enemy, and a team that becomes closer as their problems become clearer. This is truly a book written about a man for men. Which isn't to say that girls won't love this tale, or that it's bereft of strong female characters. In fact, Crutcher is especially good at balanci

Top 5 YA Books of All TIme

Published by Thriftbooks.com User , 18 years ago
Whale Talk is a book that takes the reader on a roller coaster ride of emotions. The books warms the heart, infuriates, teaches, and opens the eyes of any reader that picks this book up. The Tao Jones is a mixed race character who is adopted from a drug-addicted mother. Tao is taken in by a truck driving dad and lawyer mother who are just about the coolest parents on earth, but they aren't without their own baggage. Whale Talk is a masterfully woven tale that traces Tao through his struggles in a racist society that is also a little elitist. Tao, like most of Crutcher's protagonists, is a great athlete with a strange sense of humor. Tao enjoys getting even with those who single out he, or any other character in the high school that is different, by using the predators' ignorance against them.All in all, this is an honest portrayal of a complex mix of race, family secrets and small town routines held up by the Good Ol' Boy system along with serious developmental pshychological issues. This book will make you laugh, it will make you cry, but most importantly, it will make you examine your inner-most being in ways that will surprise you. Chris Crutcher is the undisputed King of YA Literature, which he proves with his most powerful YA novel to date.

Published by Thriftbooks.com User , 20 years ago
I've been a big fan of Chris Crutcher's work since Staying Fat for Sarah Byrnes, and the new Whale Talk draws on the same stuff that made that book an awesome read: swimming, intolerance, bad home lives, and what it is to be an outcast. Whale Talk is about The Tao Jones (T.J. for short), a mixed-race guy in a very white town, who despite being very athletic refuses to participate in organized sports. That is, until his favorite teacher, Mr. Simet, grabs him for his new swim team. Though there are some difficulties (the school has no pool and no one can actually swim except for T.J.), together they round up an unlikely group of swimmers: a brain-damaged boy, a bodybuilder, a walking-thesaurus intellectual, an overweight guy, a shadow, and a one-legged psycho. T.J.'s mission? To get this band of misfits some highly-valued letter jackets. Throw in the racial undertones and some really funny dialogue and Crutcher's got another really great book on his hands. Though a teensy bit derivative, definitely worth reading. (Watch out for the character of Andy Mott. Crutcher always seems to pick a character we are meant to love with abandon. In Sarah Byrnes, it was Ellerby. In Whale Talk, it's definitely Mott.) It also reads really fast...I couldn't put it down till I had finished it, though it meant staying up half the night. Two thumbs up.

Published by Thriftbooks.com User , 20 years ago
In typical Crutcher style, Whale Talk is set in a small town High School. Our hero, T.J.Jones, is a mixed race natural athlete who spurns the athletic department "machine" at Cutter High. Racism and intolerance enter the equation as sharp tongued, quick witted T.J.comes to the aid of developmentally disabled Chris, who, though no athlete, has the audacity to wear his dead older brother's letter jacket. T.J. gets his chance to thumb his nose at Cutter's sports establishment when his favorite teacher implores him to "help him out" by heading up a swim team. T.J. has swum competitively and is a natural, but, alas, Cutter High has no pool. T.J. recruits four of the most unnatural swimmers, and one of them inspires him to "go for it." Sheer determination and relentless late night and early morning workouts at a 24-hour fitness center with a pool earn the ultimate prize for this team. The bond that develops between the unconventional teammates is heartwarming and allows each to share unbelievable hurts and sorrows. Themes of abuse and abandonment recur, and the pain and anger generated by the suffering Mr. Crutcher shares with us will bring tears. You will laugh out loud as well as cry, but you will enjoy unraveling the mystery that is the title. I am a dedicated Crutcher fan, so I enjoy his consistent settings and themes. Some very powerful messages are offered to readers of Whale Talk. Good reading!
Copyright © 2020 Thriftbooks.com Terms of Use | Privacy Policy | Do Not Sell My Personal Information | Accessibility Statement
ThriftBooks® and the ThriftBooks® logo are registered trademarks of Thrift Books Global, LLC